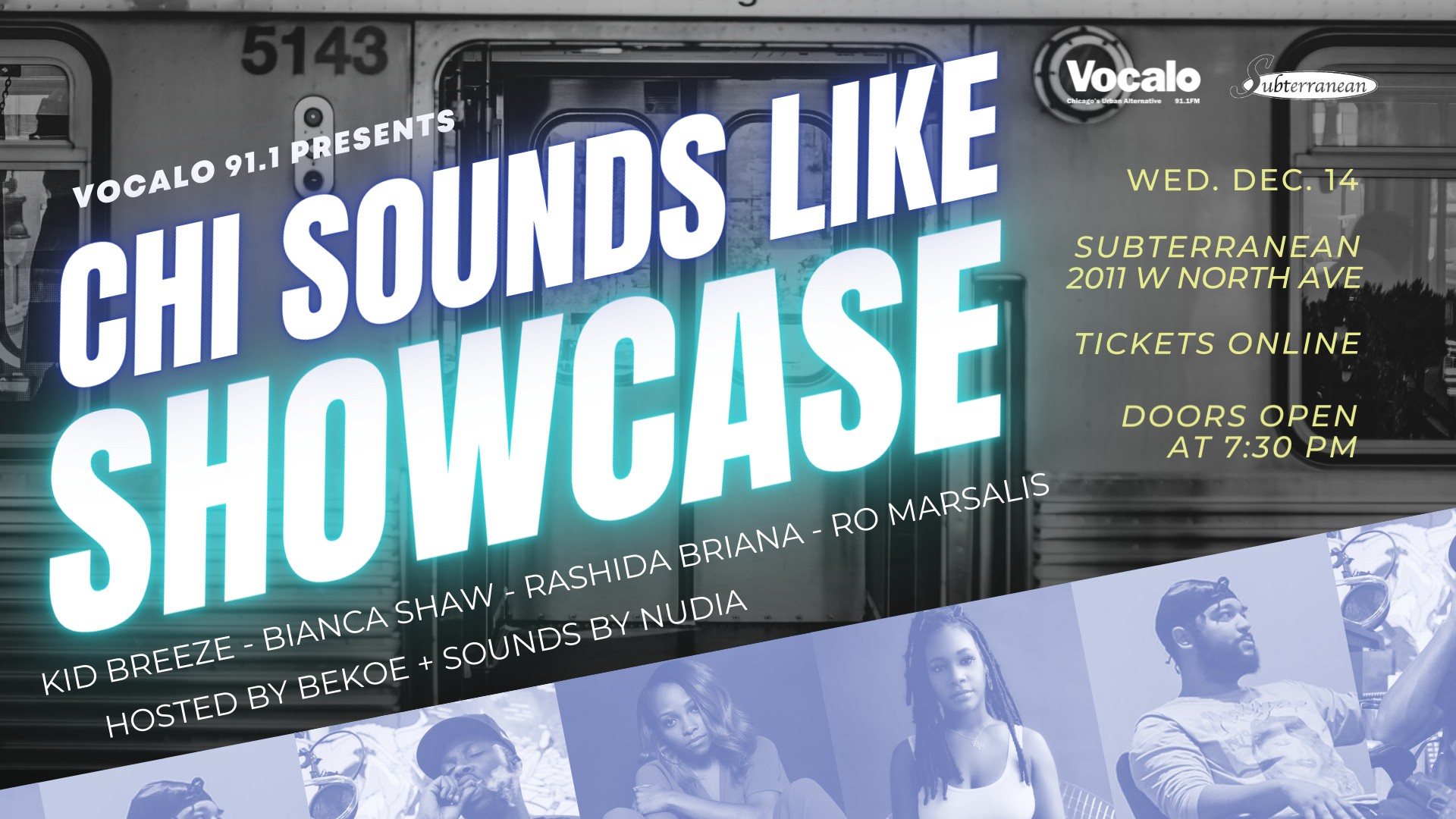 Join Vocalo for the last Chi Sounds Like Showcase of 2022. Come celebrate a year of good vibes and even better tunes with some of Chicago’s best artists. Taking place at the historic Subterranean, the evening will feature live performances from four of our favorite hip-hop and R&B artists from across the city. Featured artists include. Ro Marsalis, Kid Breeze, Bianca Shaw, and Rashida Briana.

The concert will be hosted by Vocalo’s midday host, Bekoe, and house sounds will be provided by Nudia.

The Chi Sounds Like Showcase celebrates Chicago’s music scene by connecting you to fresh artists that are moving the culture forward. This is a chance to hit the reset button on your week and chill to some good music.

Kid Breeze: Kid Breeze has been constantly releasing music on Chicago’s ever growing hip hop scene since 2014. After a short stint in Atlanta, GA, he returned to his home city and has since then released 7 full length (self produced) solo projects, as well as an EP, a group project (3 Kings- This For Anybody), 4 instrumental projects, (2 of which were done by his production duo with Matcy P “Tha Shipmates”), as well as a large amount of production and feature work for other artist’s projects. With his street savvy lyrics and hard hitting often 90s “gangsta rap” inspired production, he has been able to captivate listeners across many spectrums from blue collar hard workers to those still hustling to make things happen. His ability to produce, write and compose his own music, acquired skill set in behind the lens production (ie; shooting visual content), as well as his Interest and activity in fashion, sets Kid Breeze apart from any other artist in the Chicago and surrounding areas.

Bianca Shaw - Born and raised in Chicago, Illinois, Bianca Shaw is an American Hip-Hop Emcee, Singer, Drummer and Songwriter who began writing her first raps at 11-years old. Bianca was inspired by mother, Portia Shaw, to sing and empowered by Missy Elliot, Erykah Badu, and Beyonce’s authentic and powerful ability to sell music without compromising their artistic and financial control. Inside her music, she values every element of sound and feels you should not limit your creativity to societal standards when discussing genres.

​Shaw aims to tell a story so vivid that listeners not only hear her words but envision and feel them as if they were their own. Her latest video, “Bipolar” premiered on Vibe, expressing the raw emotion of feeling unbalanced in a bad romance. In addition to Bianca’s first Album “Guns and Roses” she has released her latest EP “Exhale” exclusively premiered on Billboard. Some of her collaborations include Taylor Bennett, Twista, and Chance The Rapper. She is currently working on a future project with a variety of artists.

Through her exposure in performances across the country, new music and recent videos, her fan base has increased and she has gained the respect of other Hip Hop lovers and artists. Bianca Shaw is the on the rise to be a Reckoning Force and influence in the music world.

Rashida Briana: Rashida Briana is a Chicago-born singer and songwriter. As the youngest of three born to a family of musicians, she was introduced to a wide range of music and began singing at the tender age of three. With her sultry sound and cutting lyrics that are reminiscent of her musical influences, she headlined her own show at the House of Blues Chicago in 2016. Her debut single, “Baby You”, was released in 2021.