One thing we’ve learned from hosting our open forum for random curiosities is that people are really curious about the history of our infrastructure. We’ve collected more than 550 questions so far, and more than half of them (321) have to do with history or urban planning. So, let’s chip away at this backlog, albeit with a modest start.

We’ve picked four high-priority questions and two experts to play the cleanup crew: John R. Schmidt, WBEZ’s longtime history blogger; and Dennis McClendon, Curious City’s most prolific (and enthusiastic) web commenter. We’ve been meaning to get John into the Curious City circle for a while, but if you don’t yet know the cut of his jib, check out his extensive archive. Dennis, though, may need an introduction.

At the time of writing, Dennis McClendon is far and away the all-star commenter on our question website; he’s racked up answers to 51 questions and, he tells us, he’s itching to do more. As a passionate expert on our built environment, he’s doing all of us a favor, as there are many questions about infrastructure out there just waiting for some insight. If you’ve encountered his comments, you know he’s quick and to the point. Behind the quick sign-off, though, are years spent as a cartographer, geographer, and a  contributor to the Encyclopedia of Chicago.
So, thanks, John and Dennis! Now ... your questions.
I have never understood why the Metra trains run on "opposite tracks" — in other words, using the left tracks rather than the right.  Why? - Colleen Duke 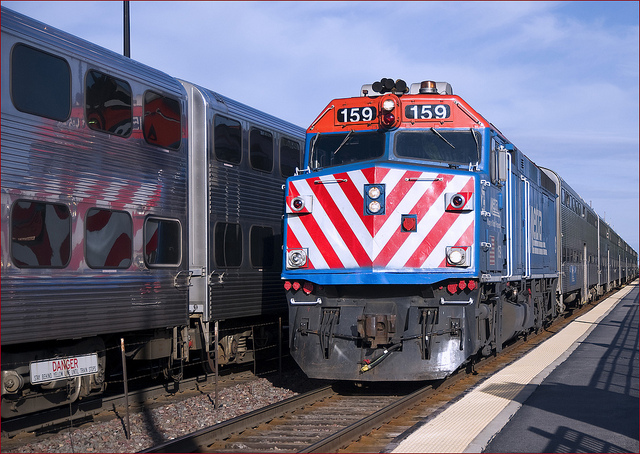 Dennis McClendon has that answer:
“The three Metra lines are operated by Union Pacific, originally the Chicago & North Western Railway. A number of explanations, none definitive, have been advanced over the years, including the wild claim that it's somehow the result of heavy English involvement in financing of the early construction. The more sensible explanation seems to be that most of the early depots on the original Galena & Chicago Union R.R. line, which ran westward from Chicago, were placed on the north side of the tracks. When the line was double-tracked, it was easier to put the new tracks to the south. Since depots are more useful to passengers, particular commuters, waiting for an inbound (Chicago-bound) train than to those who have just disembarked, it was safer to run inbound trains on the depot side, which just happened to result in left-hand running for the C&NW.
Only two other US railroads seem to have ever used left-hand running, but both had changed by 1952. Unlike drivers, locomotive engineers don’t have to judge how close they are to curbs or other vehicles, but right-hand running still has an inherent advantage for railroads. Since early locomotives had the long boiler out in front, most right-eyed engineers would prefer looking out the right-side window to see trackside signals.

Other Metra lines occasionally have to run trains on the “wrong” track at times to make way for track repairs or long freight trains.”

Whilst driving north on Canal Street from [Chicago’s] Chinatown, I saw once again the little (or big?) house at the top of the bridge near 18th & Canal. Who lives there? - Jodey Schonfeld 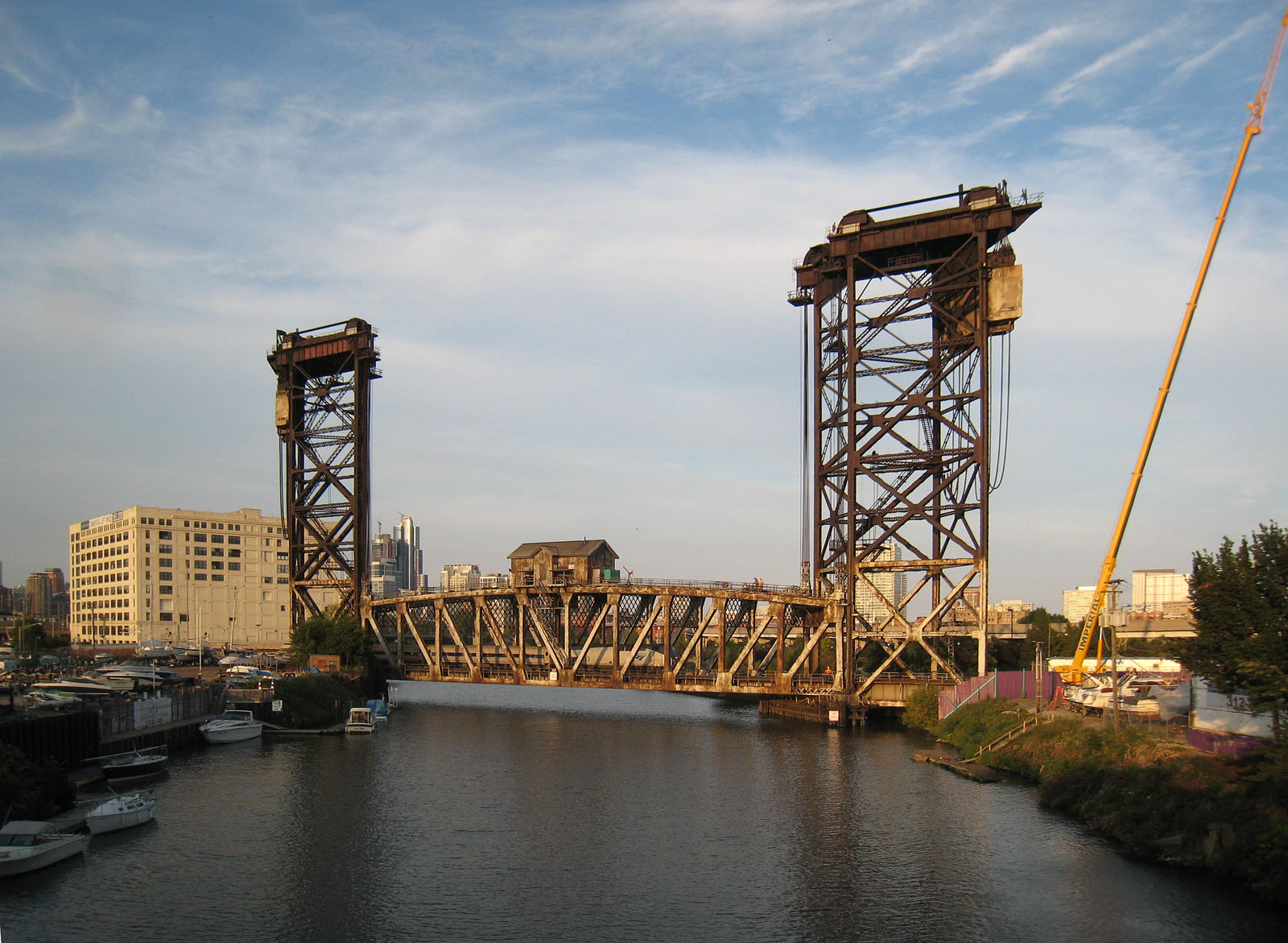 “That was the bridge tender's shack when the bridge was built in 1915. Besides being a good place to see the boats coming up and down the river, and the trains approaching from north and south, it was where the bridge's motors are housed. It may seem a bit odd to have the motors on the part of the bridge that lifts (you could liken it to pulling yourself up by your bootstraps), but the motors are attached to cables that are threaded through several sheaves on the towers, to act like a block-and-tackle. The motors stay dry and well-oiled inside the shack. Besides, when talking about a bridge leaf that weighs 1,500 tons, the weight of the motors is insignificant.

Today the bridge is operated by remote control. Amtrak operators in the control center at 14th & Lumber watch cameras and listen to marine radios to know when the bridge needs to be lifted.  To keep the approach tracks into Union Station as level as possible, the bridge is only a few feet above the river level, so it's raised frequently during the summer.”

When did the honorary naming of streets start? How many names can one street have?  Who decides which names are chosen? Will they be named that honorarily forever?
- Sarah Lopez

WBEZ’s history blogger John Schmidt stepped in for this:
“Honorary street names used to be very short-lived. In 1959, when the White Sox won their first pennant in 40 years, a portion of 35th Street became ‘White Sox Pennant Pathway’ for a couple of months. The real push for honorary street names came during the early 1980s, after the fracas about changing Evergreen Avenue to Algren Street.
The city council okays the honorary street name, after it's been proposed by an alderman. Right now there are about 1400 of them — or maybe even more. The list fills 18 pages of small type.  As the picture shows, the only limit to the number of honorary street signs is how much tax money the city council decides to spend.

Even today, honorary street names are not permanent. The 2700 block of North Central Avenue was once designated as Wally's Jumbo Red Hots Way in honor of a local hot dog stand. The signs remained up long after Wally went out of business. Then, about a year ago, the city replaced the street lights along Central, and the Wally signs were gone. Maybe they'll turn up in a garage sale?”

Why was the Western Avenue viaduct built?  Was there so much traffic at the intersection of Western, Belmont and Clybourn that we needed a bridge to fly right over it? - Jill Westerfelhaus

John Schmidt takes this question on, too:
“The Western viaduct over Belmont was built in the early 1960s. Riverview amusement park was at the northwest corner of that intersection, and the idea was to speed traffic through the site. The plan worked, but Riverview closed anyway in 1967. [Editor’s note: Curious City will soon have a lot to say about Riverview and its closure.]
At one time the city was going to build lots of these flyovers; I remember seeing the proposals in the annual Department of Public Works reports. Besides Western-Belmont, one was constructed on Archer over Ashland, and another on Ashland over Pershing. The Archer-Ashland viaduct was later torn down, but Ashland-Pershing was still there the last time I drove through the area.

The viaducts did do their job in making traffic flow better. But they were never popular with the local people because they are ugly, and they crowd the street at ground level.  In recent years, the city has even begun to scale back some of the old 1930s-era viaducts; for example, Roosevelt no longer has a viaduct over State, and Central no longer has a viaduct over Grand. It all seems to be part of the movement to make the city more pedestrian-friendly, and to discourage auto traffic.”

We thought it'd be fun to toss in a little "stump the expert" into our on-air segment with Dennis and John, so we took a question posed by Greg (who doesn't even live in Chicago!) about wooden pavement. To our delight and amazement, Dennis gave it a rather good stab. Listen for yourself below: