Curious City questioner Johnny Schulte grew up on the South Side of Chicago where, about ten years ago, he began noticing an explosion of fast food joints serving “steak and lemonade.”  Most have blue and yellow signs, and the word “Baba’s” in their name, but Johnny had no idea where they came from. So he wrote in to Curious City and asked:

What's the history of all the "steak and lemonade" restaurants you see throughout Chicago's South Side?

Specifically, Johnny wanted to know who came up with the idea and why they chose to put steak and lemonade together. I love these questions because they’ve also puzzled me — a veteran Chicago food writer — for more than a decade. And my fellow food writers have proven no help.

Very quickly, it became clear that I wouldn’t find the answers to Johnny’s questions from scholars, internet searches, or phone calls. So I hit the road with Johnny and Curious City intern Olivia Richardson, and we visited a half dozen steak and lemonade spots. Some owners told us the combo came from California. Others said it originated in the Middle East. But with some gumshoe reporting, we were finally able to track down the man behind the meaty combo. It turns out steak and lemonade restaurants have their roots a lot closer to home than we expected.

What exactly is “steak and lemonade?”

The “steak” is basically a Philly Cheesesteak-like sandwich, featuring griddle-cooked shaved beef, onions, and peppers on a mayo-smeared hoagie roll, topped with melted white cheese, tomato slices, and lettuce. Some versions — like the sandwiches at the Baba’s Famous Steak and Lemonade on 71st and Jeffrey Avenue and 71st and Michigan Avenue — add a zingy spice mixture to the beef that delivers a nice kick of heat. The steak sandwich comes with fries, and you will inevitably be asked if you want hot sauce, mild sauce, or lemon pepper on them. Be ready to answer.

The lemonade is a sweet, icy, Slurpee-like lemon drink. Most customers jazz it up with a combination of flavored syrups including blueberry, cherry, fruit punch, grape, orange, pineapple, pina colada, strawberry, and watermelon. Some places top the drink with real slices of lemon, pineapple, or strawberry, and they are always covered with plastic wrap that you punch your straw through to drink.

Who came up with the combo?

When Jordan-native Haitham “Mario” Allabadi first came to the United States, he says he opened a small fast food restaurant where steak sandwiches and lemonade were the two most popular items. So Allabadi says he came up with the idea to put these top-two sellers in the name of his next restaurant to give his business a unique but simple spin. So in 1998, he says, he opened up a restaurant in south suburban Country Club Hills with the name Baba’s Famous Steak and Lemonade. It became a local hit.

“It was an easy name and a simple name,” he says. “We wanted people to know that we are famous for steak and lemonade, like a dinner and a drink. And ‘Baba’s’ (which means dad in Arabic) is like going to [your] father or daddy’s house.” 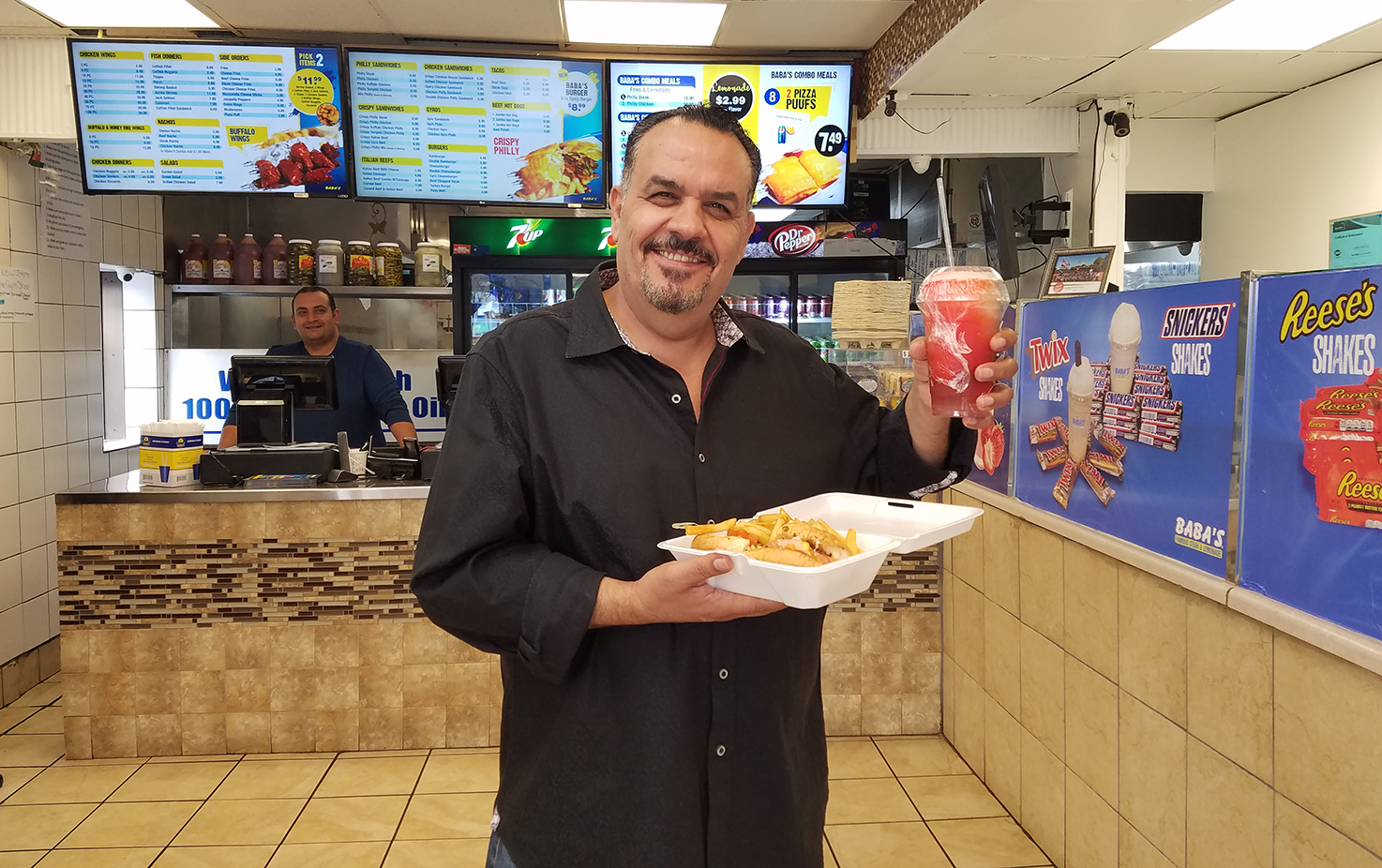 Allabadi says that in 2006 he brought the concept into Chicago, where he opened a Baba’s Famous Steak and Lemonade in South Shore. In the following years, he says, he opened several more under the same name in the city and suburbs. Then, a few years ago, he says, he sold most of his restaurants because too many people were opening similar places. Currently, Allabadi operates three Baba’s in Bolingbrook, Aurora, and the bright, sparkling location in Joliet pictured above.

Where do people eat this combo?

Johnny Schulte is a grants manager at the Chicago Bungalow Association, who grew up in the Beverly neighborhood, just a stone’s throw from several steak and lemonade restaurants.

“I never went into one but I always wondered about their history and why steak and lemonade,” he says.

Johnny went out reporting with the Curious City team and visited a half a dozen steak and lemonade restaurants. He says he loved tasting the food and meeting the people behind the restaurants.

When he finally met Allabadi and heard his story, Johnny says he was surprised that, “It just came from one guy’s idea to put two things together that I would have never thought of putting together, and that it became this huge hit that people love.”

And Johnny says this ability to make so many people happy with food is pretty important to him and his family.

“As my great-grandmother always used to say,” he recalls, “ ‘All you get out of life is a bite to eat.’”