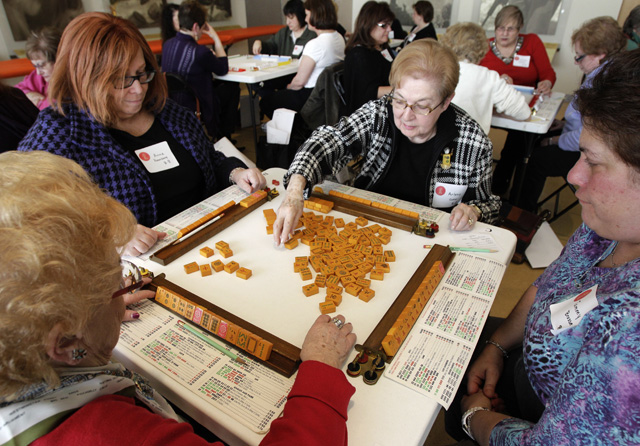 I have faint memories of the green, felt-covered card table, neat racks lined up along its edges, and in the center, a pile of smooth tiles whose purpose was a mystery to me. Grandma Flo owned her own mah jongg set, kept in a felt-lined, faux-leather kind of attaché case. My parents inherited it, but gave the set to friends, thinking they’d never use it again. Their friends gave the set back when they learned my mother was taking lessons last year. Apparently all the women in my parents’ Florida retirement community play, and she didn’t want to be left out!

But it’s not an obvious mix, this complicated Chinese game played with intricate domino-like tiles, and bubbe. So how’d we get here?

If there is an answer to why my grandmother’s generation of Jewish women took to mah jongg, it starts back in 1893, when an early version of the game made its American debut in Chicago at the World’s Columbian Exhibition.

The game was on display alongside dominoes and other examples of foreign “folklore” and games. According to Melissa Martens, director of collections and exhibitions at the Museum of Jewish Heritage in New York and a mah jongg expert, it was then popularized by businessman Joseph Babcock, an American who had traveled to China with Standard Oil. He patented an American version of the game with its current (and curious) double-G spelling. 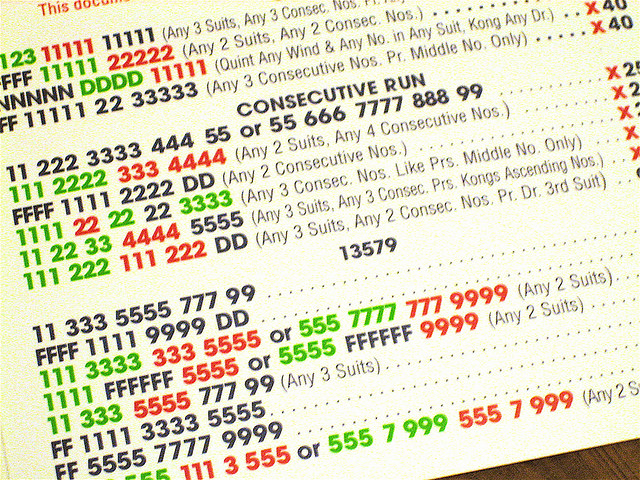 The game became immensely popular with the general American public in the roaring ‘20s, Martens says, with close ties to flapper culture and a love of anything that smacked of the exotic East. The game was so popular that Chinese manufacturers ran short of the animal bones they needed to make the tiles. Bones from Chicago’s Union Stock Yards were shipped to Chinese manufacturers to meet the demand, Martens says.

Still, this early popularity with America’s general public doesn’t explain the special place mah jongg now holds in the hearts of temple sisterhoods all over America.

Martens says asking why mah jongg was so widely adopted by American Jews “is like asking why Jews like Chinese food.” We just do. I’m not so sure about that. I thought everyone knew Jews love Chinese food because Chinese restaurants used to be the only ones open on Christmas.

You have to go a few decades further to understand why mah jongg gained a foothold in Jewish culture, to pre-World War II America. American Jews were more assimilated then, and more financially stable. And they were looking for a philanthropic cause. Listen above as Martens connects the historical dots.

Dynamic Range showcases hidden gems unearthed from Chicago Amplified’s vast archive of public events and appears on weekends. Melissa Martens spoke at an event presented by the Spertus Institute of Jewish Studies in January, 2011. Click here to hear the event in its entirety.