Intellectual, philosophical, literary, rebellious, Simone de Beauvoir spoke a mile a minute, and wrote quickly, too — novels, essays, a play, four memoirs. She was an atheist, bisexual, pioneer feminist, and her longtime lover, Jean-Paul Sartre, wrote the book on Existentialism. When she died in 1986 she was world-famous — and National Museum of Women in the Arts in Washington, D.C., is saluting her again.

De Beauvoir wanted to be a nun when she was little, but by her teenage years, she had decided to become a writer; it was what she wanted most in the world, she told a friend at the time.

Sarah Osborne Bender runs the library and research center at the museum. De Beauvoir wrote like a scribe, she says. Bender points out two small piles of graph paper — the kind French students use to discipline their handwriting. They are an early draft of de Beauvoir’s best-known book, The Second Sex, a 1949 feminist treatise on what it means to be a woman. 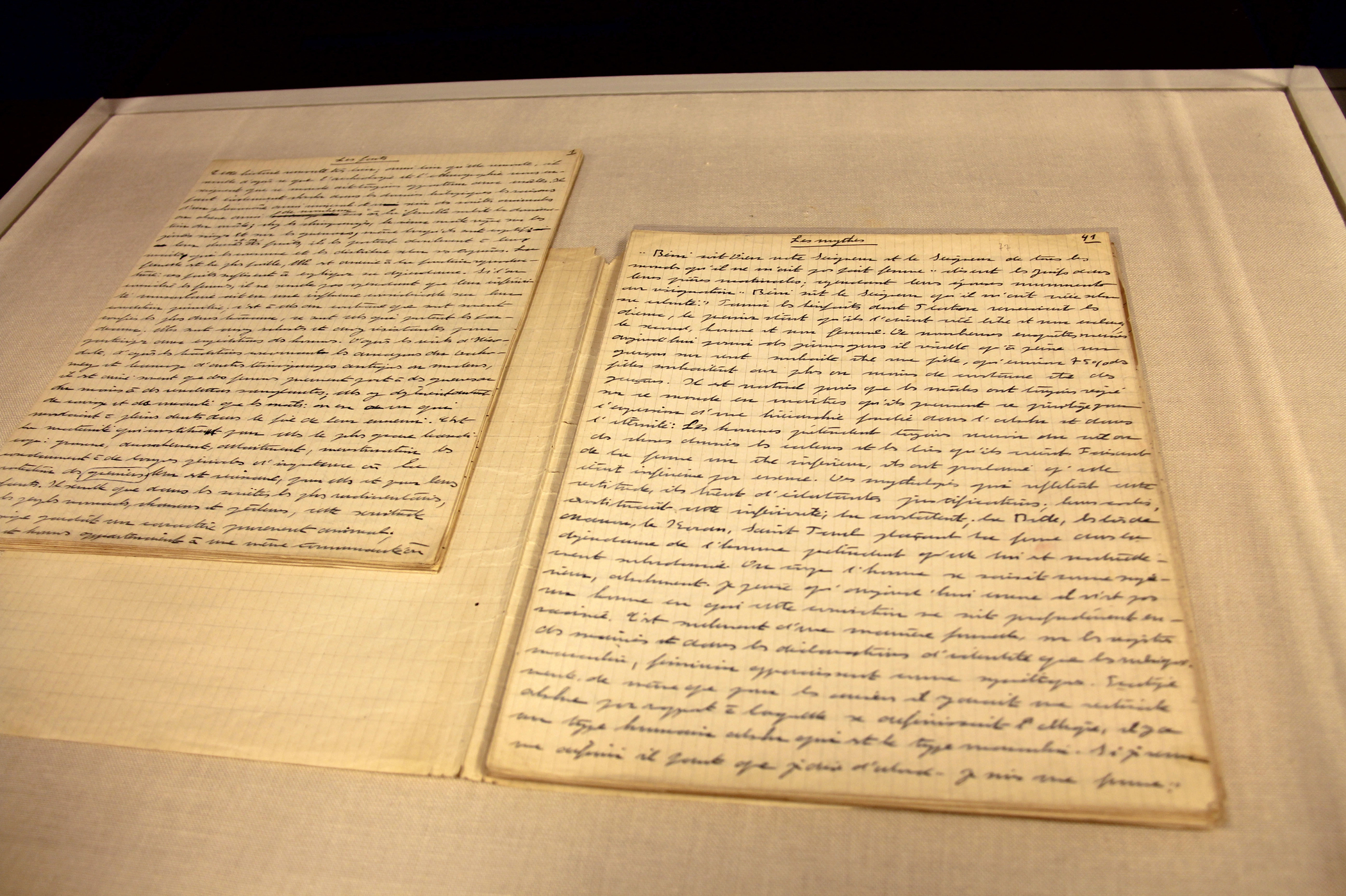 An early longhand manuscript of de Beauvoir’s The Second Sex. (Emily Haight/National Museum of Women in the Arts)

“When she finally decided that she was going to write this, the ideas just poured from her,” Bender says.

You can see it on these pages — she wrote in longhand, the words marching steadily across the paper, only two small crossouts.

This manuscript is the only original object in the exhibit. “From the Desk of Simone de Beauvoir” is a cozy assemblage of objects that could have been in her Paris apartment — desk, lamp, bookcases. 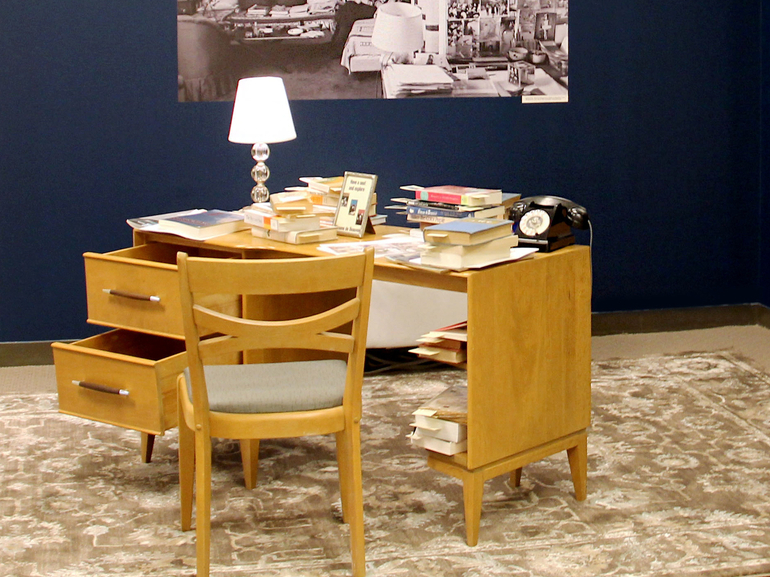 “From the Desk of Simone de Beauvoir” invites visitors to sit down and explore a replica of the French feminist’s desk. (Emily Haight/National Museum of Women in the Arts)

“Her apartment was cluttered, her desk was covered, her bookshelves were packed,” Bender says.

Black and white photographs in the installation show the philosopher in her apartment. You can also see the snapshots de Beauvoir tacked to her walls — showing travels, loved ones, friends she referred to as “the family,” and, occasionally a movie star.

It’s a real intellectual’s apartment — the digs of someone who spent time reading, writing and thinking. An end table holds some travel tchotchkes and cast of Sartre’s hands. Sartre was a Nobel Prize-winning writer, philosopher and existentialist. He and de Beauvoir had a lifelong virtual marriage of intellect, opinions, ambitions, intense conversation and Deux Magots coffee. It was an open relationship — no wedding license, no children and various lovers on the side. 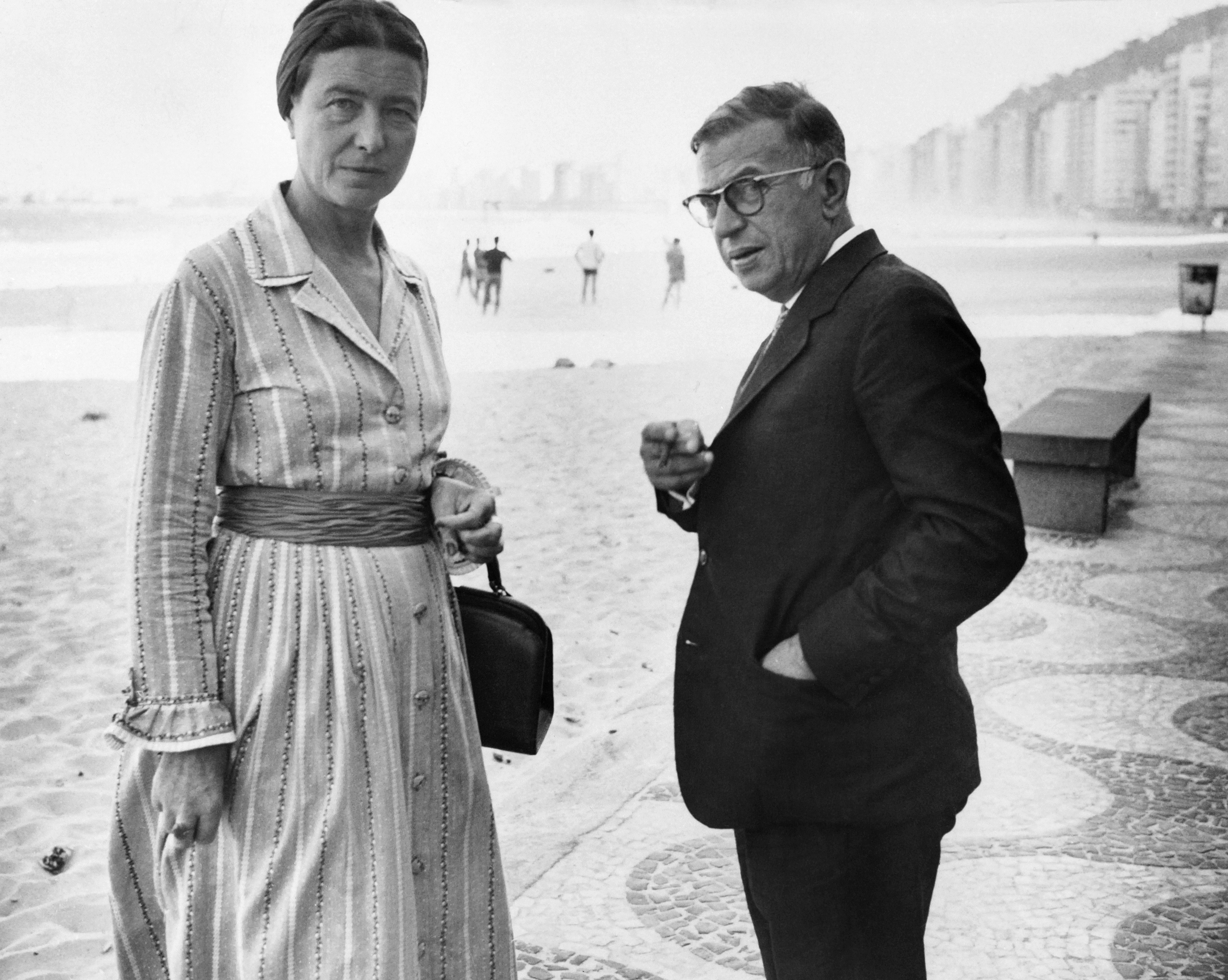 De Beauvoir and Jean-Paul Sartre are shown above at Copacabana Beach, circa 1960. (STF/AFP/Getty Images)

De Beauvoir’s deepest focus was feminism — existing as a woman in a man’s world. “Being a woman was not a problem for me,” she said.

Brilliant, confident and outspoken, she interviewed dozens of women about their problems, and analyzed them in The Second Sex. Decades before Betty Friedan, Gloria Steinem and Ms. Magazine, de Beauvoir declared: “One is not born, but rather becomes, a woman.” It’s society that makes women second-rate, acquiescent, oppressed.

In the late 1960s, when women in France and the U.S. became activists for equality, de Beauvoir agreed with their goals. “They needed to take their issues into their own hands,” Bender says. “They couldn’t wait for men to invite them into the fold. If they wanted change and wanted their own place, they needed to make it.”

“I was amazed at the presence she had in popular culture,” Bender says. “If you search Simone de Beauvoir on Twitter or Instagram, the daily volume of content — her quotes, pictures of her, people saying they’re reading her for a university class — every day there’s content about her.”

The de Beauvoir installation will remain at the Museum of Women in the Arts until August 12.