President Trump delivered one of the longest State of the Union speeches in history.

Clocking in at one hour and 20 minutes, it was the third-longest, behind two from President Bill Clinton in 2000 and 1995.

If you missed the speech, we promise to catch you up in far less than that (so, you’re welcome). 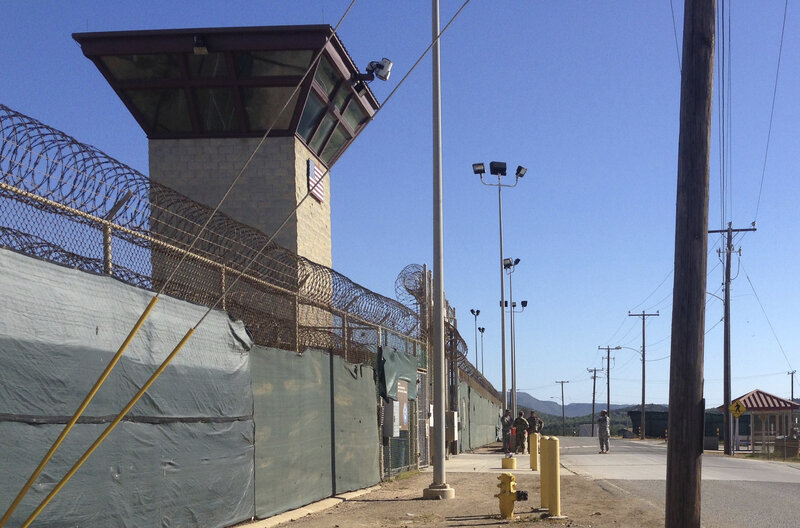 State of the Union addresses tend to be a healthy dose of touting accomplishments (there was plenty of that) and laundry lists of policy proposals the president would like to see Congress take up in the next year.

Trump addressed some policy: calling for the U.S. detention facility at Guantanamo Bay, Cuba, to remain open, vowing to lower prescription drug costs, again dangling infrastructure as something both parties could work on, looking to rebuild America’s nuclear weapons arsenal, and flirting with cutting off foreign aid to countries who don’t move in lockstep with the United States.

But there wasn’t much new policy in the speech. 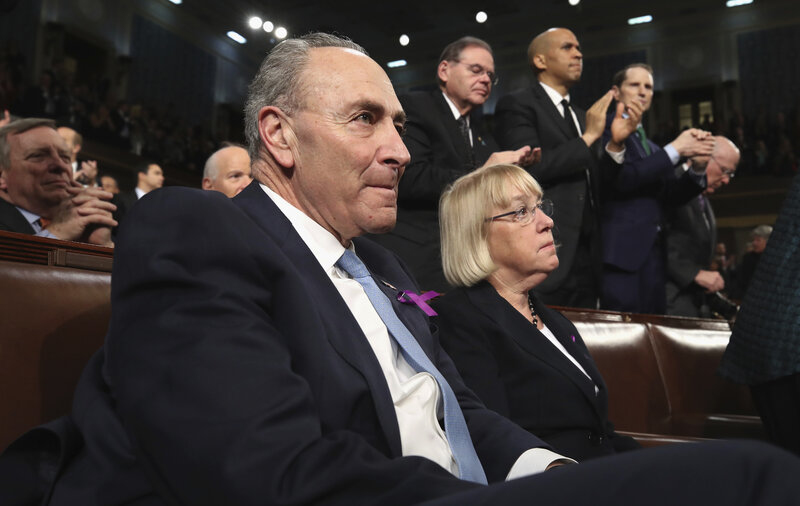 “Tonight, I call upon on all of us to set aside our differences, to seek out common ground, and to summon the unity we need to deliver for the people. This is really the key. These are the people we were elected to serve.”

Tonally, the president seemed more relaxed, comfortable and less stilted reading from a teleprompter this year than last, when he gave an address to a joint session of Congress not long after his inauguration. There was a lot more “you” than “me” in Tuesday’s speech. And that’s always a good thing for a president.

But the president was making a clear calculation — he was talking past the media filter to maybe the biggest audience he will have all year. In 2017, his address to Congress drew 47.7 million viewers. That’s more than double NBC’s Sunday Night Football (20 million), CBS’s Big Bang Theory (19 million) and the finale for HBO’s Game of Thrones (16.5 million with streaming and apps).

In other words, if the past is prologue, the likelihood of actual bipartisanship pursued by Trump isn’t very good.

3. “Americans are dreamers, too”

“My duty, and the sacred duty of every elected official in this chamber, is to defend Americans, to protect their safety, their families, their communities, and their right to the American dream — because Americans are dreamers, too.”

That last line was one that upset many Democrats and advocates of a solution for getting people brought to the United States as children some road to legalization. Those DREAMers see themselves as every bit American. Trump subverted that idea with this line. 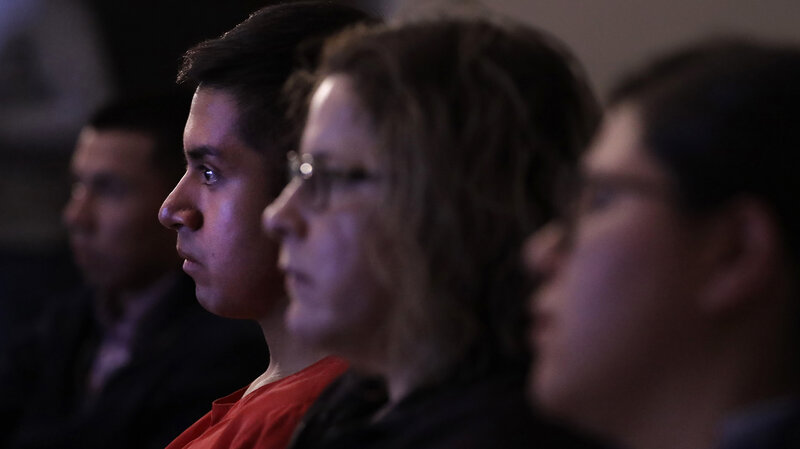 The president also brought in some other divisive themes, including leaning into his pro-police message that was wrapped in with the military. And he even alluded to the controversy he pushed with the NFL over standing for the national anthem.

“Together, we are rediscovering the American way,” Trump said. “In America, we know that faith and family, not government and bureaucracy, are the center of American life. The motto is in God we trust. And we celebrate our police, our military and our amazing veterans as heroes who deserve our total and unwavering support.”

Mentioning Preston Sharp, a 12-year-old from California who planted flags at veterans’ graves on Veterans Day, Trump said: “Preston’s reverence for those who have served our nation reminds us of why we salute our flag, why we put our hands on our hearts for the Pledge of Allegiance and why we proudly stand for the national anthem.”

The military and standing for the anthem poll well, and the White House knows it.

“Today, he has a new leg, but Seong-ho, I understand you still keep those old crutches as a reminder of how far you have come. Your great sacrifice is an inspiration to us all.” 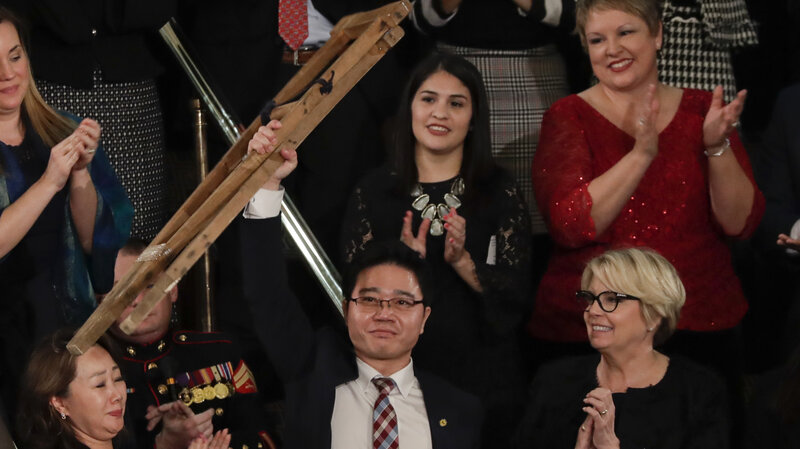 Sound pretty routine for a president to include that? Not back then. Skutnik was the first “regular person” story used in a State of the Union. On Tuesday, Trump took the use of the device to a new level. He acknowledged a whopping 16 people sitting in the audience, such as North Korean defector Ji Seong Ho, at the State of the Union as invited guests and integrated their stories into his speech.

It was an emotional high point of Trump’s 2017 address to Congress when he mentioned Carryn Owens, the widow of Chief Petty Officer William “Ryan” Owens, who was killed in a raid in Yemen. It proved a strong device for Trump then, and his team decided to go all out with their use in this speech, weaving these stories throughout his speech.

No, he didn’t do it in the speech, but afterward he was overheard telling a Republican lawmaker he is 100 percent in favor of releasing a classified memo that reportedly has explosive information on the FBI. It was gathered by the controversial Republican chair of the House Intelligence Committee, Rep. Devin Nunes of California.

Conservatives believe the memo could undermine the FBI and Justice Department’s investigation into Russian interference in the 2016 presidential election and prove bias. The House Intelligence Committee voted along party lines Monday night to release the memo. That vote triggered a process that gives Trump five days to object to the memo’s release, an objection that looks increasingly unlikely given Trump’s comment Tuesday night.

Getting all the attention at the beginning of the speech was first lady Melania Trump’s white pantsuit and blouse. It had people asking: What message is she sending? Democratic women were in all black for Trump’s speech. Hillary Clinton wore white to accept the Democratic nomination for president as a tribute to the suffragettes.

Mrs. Trump also got attention for whom she didn’t show up with to the speech — her husband. CNN’s Kate Bennett noted: “The motorcade ride, from the White House south lawn to the Capitol building, is just a handful of minutes, but for a first couple who has not been publicly seen together since New Year’s Eve, the separate cars were another in a string of isolated movements from a very independent first lady.”

7. Another Kennedy takes a star turn

Joe Kennedy III, the 37-year-old congressman from Massachusetts, delivered the official Democratic response. He is the grandson of Robert F. Kennedy, who was killed while campaigning for the Democratic nomination for president 50 years ago this year.

Kennedy delivered a sharp, on-message performance, except for one thing – the lip gloss.

At 8:45 p.m., 15 minutes before the State of the Union, Hillary Clinton dropped a 1,573-word statement on Facebook backtracking on a controversial decision she made not to fire a senior campaign official accused of sexual harassment during her 2008 presidential campaign. The staffer joined a pro-Clinton outside group in 2016, where he was fired for “workplace issues, including allegations that he harassed a young female aide,” The New York Times reported.

“I very much understand the question I’m being asked as to why I let an employee on my 2008 campaign keep his job despite his inappropriate workplace behavior,” Clinton wrote in her Facebook statement. “The short answer is this: If I had it to do again, I wouldn’t.”

Politicians do this kind of thing when they want to bury something they don’t want getting a lot of attention. The thing is: Hillary Clinton says she isn’t running for anything anymore. And she told NPR’s Tamara Keith after the 2016 election that she has the “responsibility to speak out.”