Christine Thompson is eager to leave the two bedroom apartment she rents in a shabby house on the north side of Milwaukee. There are so many things wrong with the place.

"In the bathroom I have to turn my shower on in order for the light to come on. And when I turn the shower off, the light goes off," she says.

The apartment also has mice, cockroaches, and so many bedbugs that she and her sons — ages 3 and 7 — sleep on an air mattress on the dining room floor, where's there's no carpet. She also has no oven or stove, and water leaking from the ceiling.

But Thompson's search for a new place has hit a brick wall after her landlord recently filed an eviction case against her, saying she owes more than $3,000 in back rent. She says most landlords won't rent to her with a potential eviction on her record while others are demanding that she pay two months rent, plus a security deposit, up front, something she can't afford.

Thompson is hardly alone. There are about 12,000 eviction cases each year in Milwaukee County, and more than an estimated 2.7 million evictions across the country.

Many of those evictions take place in the winter, when temperatures fall below freezing. Some countries, such as France, Austria and Poland, prohibit removing people from their homes when it's so cold. But that's not the case in the United States. A few places, like Maryland and Washington, D.C., postpone evictions when it's below freezing and over the holidays, although those places are the exception rather than the rule.

In Wisconsin, the state legislature passed a law in 2011 that expressly prohibits local governments from imposing eviction moratoriums.

While many evicted tenants are able to move in with family or friends, or into cheaper apartments, some end up on the street. 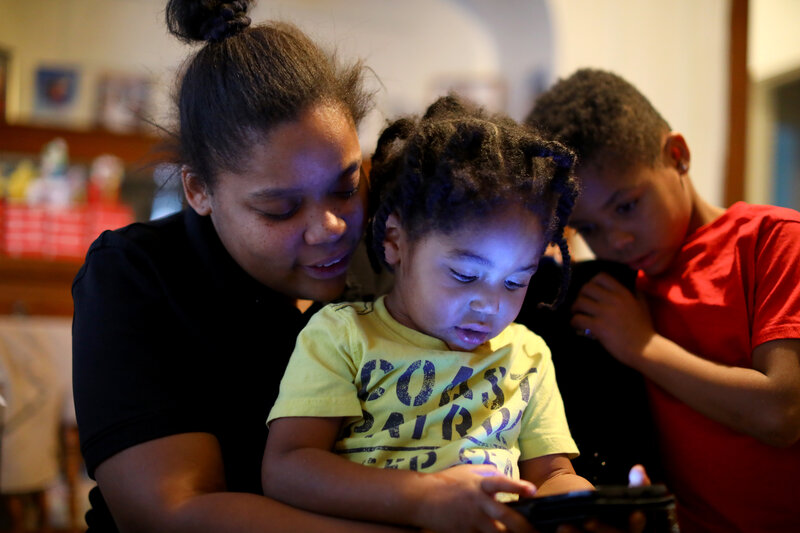 Christine Thompson plays music on her phone for her kids at their rental home in Milwaukee. The family is facing eviction in the next week or two. (Coburn Dukehart for NPR)

Thompson is worried she'll be evicted and has been calling the local homeless shelters just in case she doesn't find another apartment.

"And they'll tell me to call back. They don't have any openings right now," she says. "They're all full. And I understand because it's the wintertime and a lot of homeless people are going to the shelters." 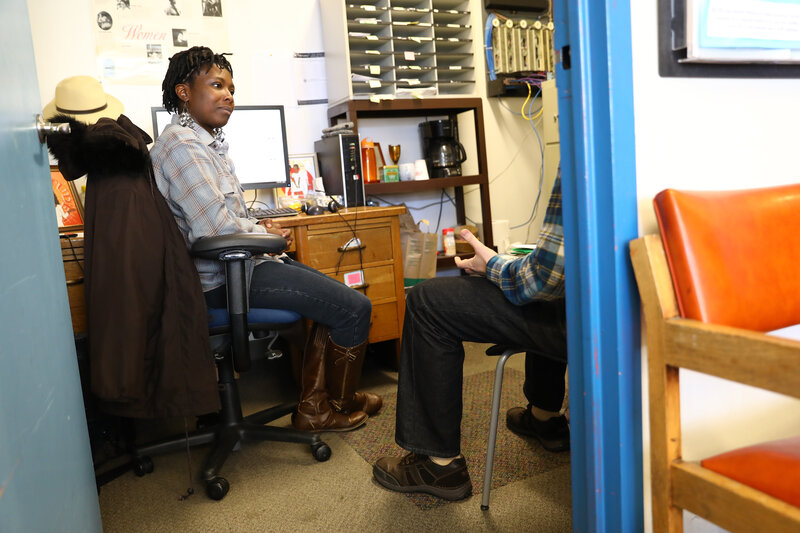 Shenise Morgan talks to a client in her office at the Tenant Resource Center in Madison, Wis. The center accepts walk-in appointments for anyone in Wisconsin needing advice on landlord, tenant or housing issues. (Coburn Dukehart for NPR)

Shenise Morgan, a case manager with the Tenant Resource Center in Madison, knows how scary it can be to not have a place to live. For almost a year, she, her husband and their six children stayed in their car and a camper in a homeless encampment in the city when they couldn't find an apartment they could afford. They would sometimes turn the car engine on just to keep warm.

"I think it sucks. Winter time, especially in Wisconsin, is so cold," says Morgan. "A majority of people that's being evicted got kids, you know. It's heartless."

Today, Morgan helps families facing eviction proceedings in court. She says some of her clients mistakenly think they can't be evicted in winter. 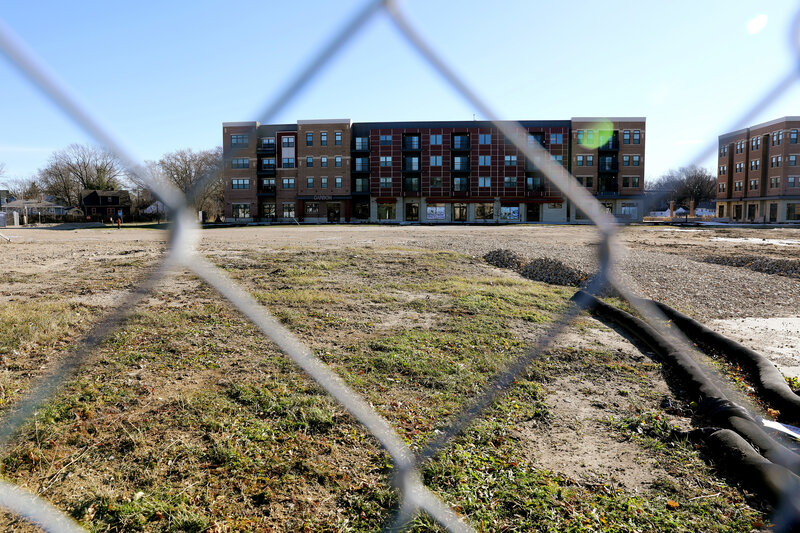 Shenise Morgan, her husband Demetrius and their six children lived for close to a year in this lot in an area called Union Corners, in Madison, Wis., that is now the site of mixed-use development including a health complex and retails shops. They slept in a Subaru station wagon and an old RV, loaned to them by her brother. (Coburn Dukehart for NPR)

"They's like 'I know my landlord's doing this illegally. They trying to evict us in the wintertime.' And we have to call them and let them know, no, that, that's law. They can," says Morgan.

Ed Hahlbeck, who has a building in Milwaukee with five rental units, is sympathetic when tenants have a hard time making the rent, and might give them some extra time to pay. But he says he can only do so much.

Hahlbeck evicted one tenant right before Thanksgiving because the man was a couple of months behind on rent and showed no signs of paying up.

"This particular tenant basically stole $2,000 from me. And again, people say, 'Well he's a landlord. He's got plenty of money and all that stuff.' Well, I don't. I'm just an average Joe," says Hahlbeck. "I've got a family. I've got three kids. I put 'em all through college. And this guy stole two thousand bucks from me. You know, I'll never get it back."

Hahlbeck says an eviction moratorium would mean even more months without receiving any rental income on a unit, even though he still has to pay the mortgage and other bills on the property.

If landlords like Hahlbeck go out of business, there will be even less affordable housing for low-income families, says Heiner Giese, an attorney for the Apartment Association of Southeastern Wisconsin. Both landlords and tenants agree that a lack of such housing is at the heart of the problem.

"We would have no problem with a moratorium. But the question is, who's going to pay for it," says Giese.

Giese says maybe the government should, but he admits that's unlikely.

For her part, Christine Thompson is hopeful she'll find another place, even if it busts her already tight budget. She makes little more than minimum wage working part-time at banquets and other events.

"I was telling my kids like if we have to move, we probably won't have a Christmas this year. But we're gonna make it. It's better to have a house than Christmas, anyway," she says.

But time is running short for Thompson. Her eviction case goes to court December 20th.