The White House continued Wednesday to defend the abrupt dismissal of FBI Director James Comey, arguing that President Trump had “been considering letting Director Comey go since the day he was elected.”

But there are new concerns about how Comey’s role in overseeing the investigation into Russian meddling in the 2016 election and possible collusion with the Trump campaign affected the president’s decision.

Days before he was fired, Comey asked for added resources for the FBI’s Russia investigation, NPR’s Mary Louise Kelly and Geoff Bennett report.

According to two Senate aides with knowledge of the investigation, Comey met with Deputy Attorney General Rod Rosenstein last week to ask for significant added resources for the Russia investigation. On Monday, Comey briefed key senators about the request.

That was the same day that Rosenstein and Attorney General Jeff Sessions met with Trump to voice concerns about Comey’s performance and waning confidence within the FBI. Trump asked the two “to put that recommendation in writing,” White House principal deputy press secretary Sarah Huckabee Sanders said Wednesday, but she denied that Trump had asked Rosenstein for a reason to fire Comey.

In Rosenstein’s memo to Sessions released Tuesday night, the deputy attorney general concluded that Comey’s handling of the investigation into Hillary Clinton’s private email server justified his dismissal because Comey had refused to acknowledge what many viewed as mistakes in how and why Comey made public disclosures about the investigation at key moments in the presidential campaign.

“The FBI Director is never empowered to supplant federal prosecutors and assume command of the Justice Department,” Rosenstein wrote in the memorandum, which was forwarded by Sessions to the president.

Trump on Wednesday continued to defend his decision to fire Comey amid the growing firestorm, telling reporters in the Oval Office that “he wasn’t doing a good job.”

At the White House briefing later that afternoon, Huckabee Sanders said that Trump had lost confidence in Comey “over the last several months” and that “he’d been considering letting Director Comey go since the day he was elected.”

The White House did little to tamp down concerns about possible Russian influence though, with Russian Foreign Minister Sergey Lavrov meeting with Trump in the Oval Office on Wednesday while Lavrov was in Washington for a previously scheduled trip.

And after Trump’s swift firing of Comey drew comparisons to President Richard Nixon’s infamous “Saturday Night Massacre,” the president then had another surprise visitor beside him as he spoke to reporters — former Nixon Secretary of State Henry Kissinger.

The administration’s position remains that Trump took action against Comey after recommendations from Rosenstein and Sessions, even though Sessions had to recuse himself from the Russia investigation being conducted by the FBI.

Lavrov’s visit to the White House to meet with the president also included Russian Ambassador to the U.S. Sergey Kislyak — who spoke with Michael Flynn, Trump’s short-lived national security adviser, during the transition late last year and also had contacts with then-Sen. Sessions during the campaign. Those contacts with Kislyak played a role in Flynn’s ultimate resignation from his job at the White House and in Sessions’ decision to recuse himself from overseeing the FBI’s Russia investigation.

“The president took strong and decisive leadership here to put the safety and security of the American people first,” Pence said.

However, the vice president skirted questions about whether Trump had asked Rosenstein to conduct the review of Comey’s handling of the Clinton email investigation.

The White House has struggled to square Trump’s past praise for Comey with the sudden termination. During the campaign, Trump praised Comey and said his decision to reopen the investigation less than two weeks before Election Day took “guts.”

Huckabee Sanders argued Wednesday that what Trump said as a candidate and now as president “are two very different things.”

“Having a letter like the one that he received and having that conversation that outlined the basic atrocities in circumventing the chain of command” in the Clinton investigation is what led to his dismissal, she maintained, and she compared Comey’s actions to “throwing a stick of dynamite” into the Justice Department.

Huckabee Sanders stressed that the White House wants the Justice Department to continue its investigation into Russia and the election so that it can move on from the issue.

“Whatever investigation was happening on Monday is happening today,” she said.

Clinton and other Democrats have said they believe that Comey’s controversial decision to reopen the investigation helped tip the election to Trump — and it was those statements Republicans began to seize upon on Wednesday. 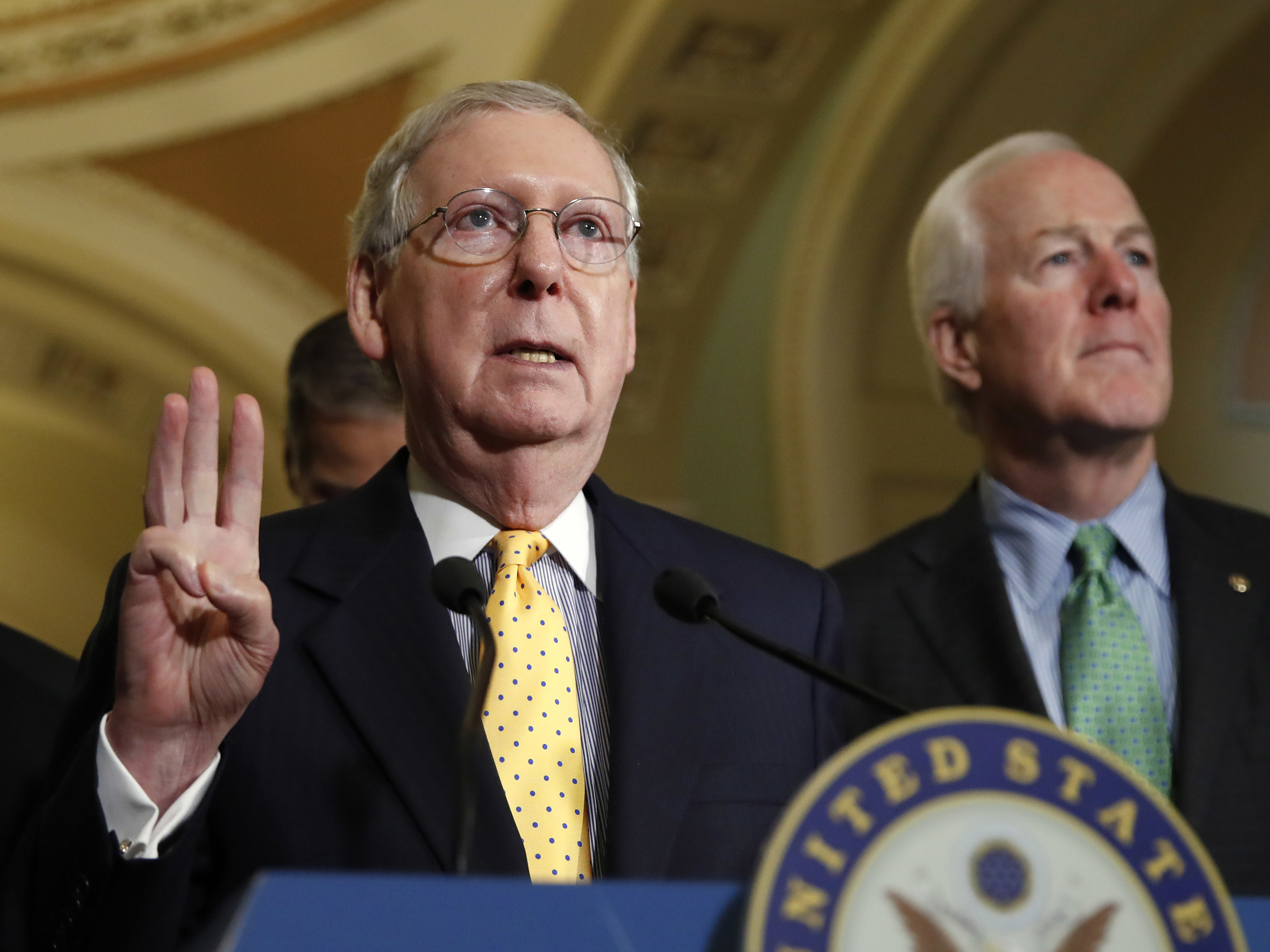 “Last year, the current Democratic leader said it appeared to be an appalling act,” McConnell said from the Senate floor. “One that he said goes against the tradition of prosecutors at every level.”

House Speaker Paul Ryan — who waited more than 24 hours after Comey’s firing to weigh in — went on Fox News Wednesday evening to defend the president’s actions.

“It is entirely within the president’s role and authority to relieve him, and that’s what he did,” Ryan told Fox News’ Bret Baier.

Democratic Minority Leader Chuck Schumer, however, tried to shift the focus away from the Clinton email investigation and onto the current FBI investigation into Russia’s meddling in the 2016 presidential election as well as possible ties between the Trump campaign and Russia.

“There is little reason to think that Mr. Rosenstein’s reason is the true reason that President Trump fired Director Comey,” Schumer said Wednesday, responding to McConnell in the Senate chamber. “Why? Because if the administration truly had objections to the way Director Comey handled the investigation, they would have had them the minute the president got into office. But he didn’t fire Director Comey then.

Reporter: Does the Comey firing cast a shadow over your talks?

“The question is: Why did it happen last night?”

Schumer continued a near-universal call from Democrats for a special prosecutor to take over the FBI’s Russia investigation, but McConnell called the suggestion unnecessary and said a new investigation would “impede the current work being done” by the FBI and by the Senate Intelligence Committee.

Before he met with Trump, Lavrov appeared to mock the kerfuffle over Comey’s firing. During a photo-op with Secretary of State Rex Tillerson, a reporter yelled out a question about whether Comey’s firing “casts a shadow” on Lavrov’s visit. Lavrov scoffed and walked away dismissively.

And prior to McConnell’s and Schumer’s remarks on the Senate floor, the president was predictably on Twitter sounding off about his decision to get rid of the FBI director. “Comey lost the confidence of almost everyone in Washington, Republican and Democrat alike.” Trump tweeted, “When things calm down, they will be thanking me!”