What the hell are these guys thinking?

I’m talking about gay men who end up working for the Republican Party that ultimately betrays them, of course. 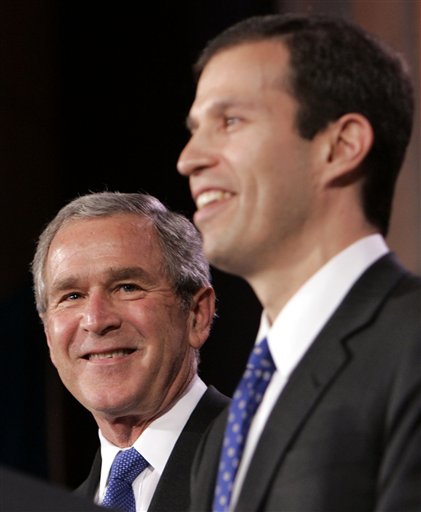 The latest victim -- if you can call a powerful, misogynistic heap of crap like this a victim -- is Richard Grenell. Until just days ago, Grenell was the first ever out gay spokesperson for a Republican presidential campaign. (He made headlines for a series of snarky, sexist tweets -- all removed from his Twitter feed now -- aimed at female political and media figures such as Hillary Clinton, Callista Gingrich and Rachel Maddow, whom he urged to “wear a necklace.”)

Grenell’s sexuality was no surprise to anyone in Romney camp. He came to them fully, publicly gay, having previously served as an out United Nations mission spokesperson during the George W. Bush administration. He’d worked, always out, for a number of GOP politicians before that.

Grenell now says he’s leaving of his own accord, because anti-gay forces in the GOP are distracting from Romney’s campaign by focusing on “personal” matters -- “personal” matters here being his sexuality, which Grenell himself has made a big deal about. Among other things, Grenell supports and strongly advocates for same sex marriage. The Romney campaign says Grenell’s sexuality was irrelevant, and it’s certainly true that as governor, Romney had gay staffers.

Indeed, back at the UN, Grenell tried, unsuccessfully, to include his longtime partner in the Blue Book, a directory of UN spouses. Why couldn’t he do this? Although the Bush administration originally told him the exclusion was due to the UN, this turned out not to be the case: The Bush administration flatly refused to acknowledge Grenell's relationship on par with those of his heteroexual colleagues.

I can only think of cynical reasons, though, for having hired Grenell in the first place. I don't think he was intended as a signal to the gay community, which will no doubt see Romney’s anti-same sex marriage and pro-"Don’t Ask Don’t Tell" stances as stronger reasons to vote against him than the appointment of a gay man might be to vote for him. Rather, I think he was intended as a sign to moderate and independent voters that Romney’s not so bad after all. As far as I can tell, this is part of Romney’s wink-wink campaign to moderates and independents to ignore the rightwing b.s. he said during the primaries.

All this is really just a continuation of a longtime Republican public/private split on queerness that a good number of gay men buy into. Like Grenell, they take the fact that his partner’s name is included in private invitations as a signal of acceptance instead of simply good manners.

I say gay men but what I really mean are mostly white gay men, usually middle or upper class -- the guys who, but for their sexual orientation, would be as much a part of the 1 percent as the people who ultimately kick them to the curb and ask them to understand when their orientation becomes unseemly and problematic.

What in heaven’s name is the issue that trumps human dignity for gay, male Republicans like Ken Mehlman, who reigned as Bush’s campaign chairman and head of the Republican National Committee while Bush promoted an anti-same sex marriage amendment to the Constitution? What was Pete Williams, now an NBC correspondent, thinking during those years when he was a spokesperson for Dick Cheney?

And what about Trevor Potter, the former FEC chair and John McCain general counsel? How does he work for a man who went to his electoral death promising to defend “Don’t Ask Don’t Tell"? What kind of mental twisting does Rick Santorum’s former senate communications director, Robert Traynham -- black and gay -- do to continue defending Santorum and his “man on dog” statements about gay sex?

Does Tony Fabrizio, Rick Perry’s openly gay pollster, poll for anyone who pays the bill? Would he poll for Obama, the Pope or Ms. magazine? Or is there some ideological line in play and, if so, what is it?

I understand that for the GOP to be gay-inclusive and get rid of its anti-gay policies, there must be gay Republicans brave and/or stupid enough to join and engage in the fight.

But my question, to quote John Lennon, is this: How do you sleep?