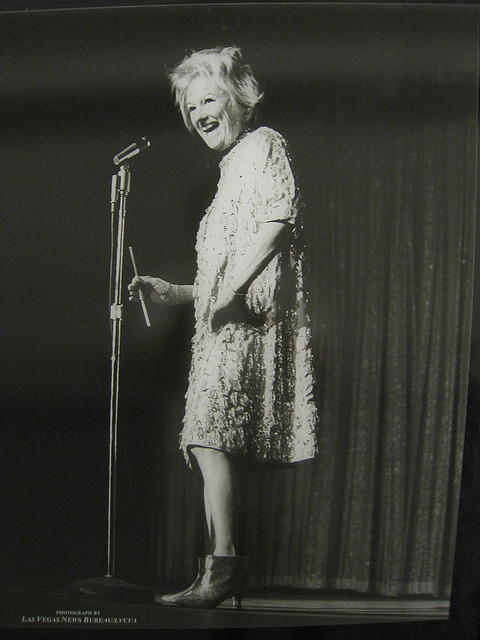 Last week, comedian Phyllis Diller died at the age of 95. But "[w]hat's the lesson of her life, for us?" asks comedian Jeremy Owens. "Phyllis Diller proves, at least for me, that you can teach an old dog new tricks. You can start a stand-up career when you’re almost 40; you get to have your second act. If you’re lucky and live to be 95 you might even get a third, fourth or fifth. So I ask you, what is it you really want to do? Why don’t you go do it." Read an excerpt below or listen above:

“Women want men, careers, money, children, friends, luxury, comfort, independence, freedom, respect, love, and a three-dollar pantyhose that won't run,” at least according to Phyllis Diller. Long before Joan Rivers asked if we could talk and Chelsea Handler sexed it up like a frat boy, there was Phyllis. She created the mold for self-deprecating female comics and did it in an age where women were to be seen and not heard. She was the first woman to tell jokes like a man, did so to great acclaim and all while supporting her family.

Born Phyllis Driver on July 17, 1917 in Lima, Ohio, she became interested in classical music, writing and theatre at an early age.  She briefly attended the Sherwood Conservatory of Music (aka Columbia College) in Chicago before transferring to Bluffton College. Her plans were to become a music teacher. Instead, she married Sherwood Diller and started a family.

She first found work writing a shopping column for a newspaper, then advertising copy. She moved on to writing and promotional jobs at radio stations, anything to make up for her husband’s inability to hold down a job. “I wanted him to get any job. He couldn’t sell Windex to a Peeping Tom.” Her knack for making people laugh at church, PTA and club functions prompted Diller, with her husband’s nudging, to set her sights on a comedy career at the ripe old age of 37.

In an NPR interview to promote her autobiography, Like a Lampshade in a Whorehouse, Phyllis recounted her decision to become a comic. “I didn’t know how to start. I thought you have a show and you find out where to do it. I called the Red Cross and said, ‘I have a show. Where do you want it?’ They said, ‘The Presidio.’ That’s an Army hospital. My first show was in a room with four beds. We did our dumb little show in that room. Three of the guys threw up and the other one re-enlisted. I’ll never forget it. I sweat blood.”