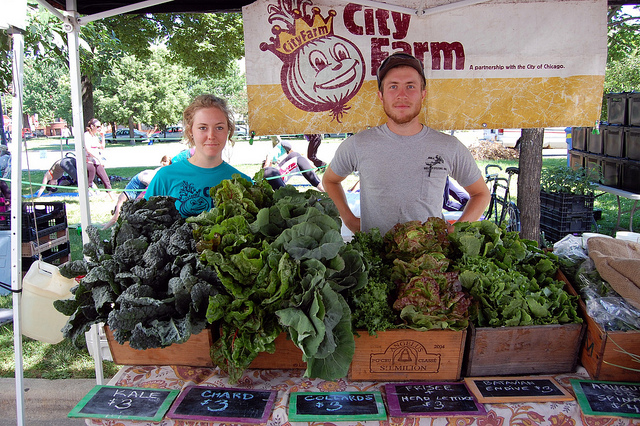 Split for a screening of the documentary Bananas! at Chicago Fair Trade. "[D]iscuss the challenges to securing healthy food and supporting production that is safe for workers. Enjoy some banana treats as well!...Sharon Hoyer, Manager at Dill Pickle Co-op will join the conversation and explain why they ONLY sell fair trade bananas!"

Roll up to the first rooftop bike-in movie of the season at Whole Foods Lincoln Park, benefitting City Farm. WFLP and New Belgium Brewing present breakfast for dinner with The Breakfast Club. "City Farm turns fallow, vacant land into amazingly productive farmland. The benefits are tangible: instead of an acre of crumbling cement and overgrown weeds we have created a viable farm that produces 25,000 pounds of heirloom tomatoes, arugula, beets, carrots, herbs; and jobs for farmers, a green space that attracts hordes of volunteers, students and other visitors."

Laissez les bon temps rouler at Dinner & Movie at Uncommon Ground on Devon. A Louisiana themed menu will be paired with a screening of Veins in the Gulf, a beautiful documentary about some not so good times too. "The words and image of Louisiana poet Martha Serpas guide the viewer as we journey through the remnants of Louisiana’s bayou regions, flying over the wetlands, examining historic aerial photographs, new satellite imagery, and traveling at water level while shrimping for dwindling seafood."

"Dress to thrill" for A Posh Night at Annabel's with dinner, drinks, and dancing at The Peninsula Chicago, benefitting the Illinois Eye-Bank, whose mission is to "preserve and restore sight through transplantation, research, education, and partnership."

Gorge at a Taste of Randolph Street, benefitting the West Loop Community Organization, from the highly anticipated BellyQ, Publican Quality Meats, Grange Hall Burger Bar, and more. "WLCO is the definitive resource for current issues and events in the West Loop community. Residents, visitors, and businesses have an active voice in decisions affecting the neighborhood—parks, development, schools, traffic, safety and more."

Mraħba to The Story of Algerian Pastries and an Epiphany by Rachel Finn at Kendall College, presented by the Culinary Historians of Chicago. "Rachel did a short apprentissage at her favorite bakery, La Bague de Kenza, [in Paris] which taught her as much about Algerian culture, cooking, and Islam as it did about baking." This event will be recorded by WBEZ's Chicago Amplified.

BYOPicnic to the birthday bash and Dirt Day at the Howard Street Farm. "We'll provide beverages, s'mores, campfires, a birthday cake, music and more! You provide your own picnic foods, plates, silverware, blanket, and roasting sticks." One contracted word: S'MORES!

Win some of the green stuff at the 10th anniversary celebration of the Chicago Center for Green Technology—and by green stuff, of course we mean "weatherization kits, rain barrels and compost bins." Aw yeah! "The Center serves as the most comprehensive green design educational resource in the Midwest. We promote and advance sustainable homes, workplaces and communities to enhance the quality of urban life. We work to facilitate this through educational programming and training, research and demonstration and by acting as a resource network."

Sunday, June 17
"Sample sumptious foods" that Real Men Cook for Charity at the brand new Salvation Army Ray and Joan Kroc Corps Community Center. "Founded in 1990, this annual event held each Father's Day in cities throughout the U.S., which began the tradition of men cooking together for a cause. The tradition has been forwarded as far as the White House. The organization's mantra is 'Real Men Cook, Real Men Love, Real Men Care, Real Men Work, Real Men Provide, Real Men Build'. This mantra appears on bandanas similar to the one United States President Barack Obama wore when serving at Real Men Cook Chicago in previous years."