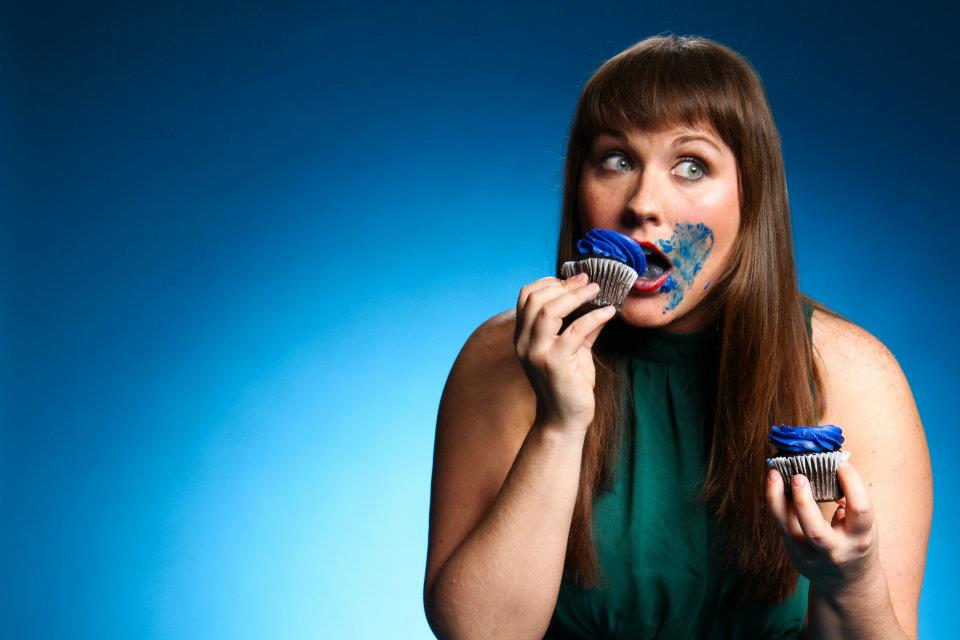 When I sat down with Kelsie Huff, we chatted for a half hour before I actually got around to interviewing her. Huff has a way of making people feel comfortable. Before you know it, you’ve told her things you’ve never told anyone, especially someone you just met. After seeing her perform at Queer Comedy at Zanies, produced by local comedian Adam Guerino, I felt like I knew her.

That buoyant accessibility is exactly what makes Huff good at her job. Huff got her start in the Chicago comedy scene doing one-woman shows, baring her soul to a room full of strangers. Like many of her peers, Huff came up through Second City and IO, honing her voice by doing stand up around the city.

Huff said performing onstage can be “like Thunderdome,” especially for women. She said after her early performances, audience members would often come up to her and say things like, “Hey, you were way funnier than that other girl in the show!”

Although she didn’t take it personally, Huff knew it was important to create safe spaces for women to hone their voice and “change the culture of comedy.” When she was starting out in the scene, she and “a roving band” of comics had group writing workshops and attended open mics together. Finding that community helped her feel at home.

“There’s a strength in finding people like you,” she said.

Femme Comme is a five-week course that caps off with a five-minute set at the Lincoln Lodge, and Huff claims she has yet to see anyone bomb.

“They crush it every time," Huff said. "There’s nothing like seeing someone do something they want to do and not failing.”

Huff started The Kates in 2005, an all-female comedy group in Lincoln Square. Fellow Chicago comedian Ever Mainard says The Kates was a landmark moment for female comedy and a “big factor in getting all the women who are working going.

“Kelsie Huff dissolves all the competition out of comedy," Mainard said. "She understands that many of us are just here to express ourselves, and she will book any woman who wants to perform. That’s the key to building a supportive network.”

Ever Mainard and Caitlin Bergh

For Mainard, occupying public spaces is important for female comedians “to address sensitive topics.” In her act, Mainard uses comedy to highlight the realities of sexual assault and the messages women are taught about getting raped. It’s a way of fighting back and unpacking issues you’re told you can never discuss.

“If not onstage,” Mainard asked, “when else are you going to talk about it?”

Her parents told her, “You can do whatever you want, just don’t shout it from the rooftops.”

“That hush-hush attitude creates so many social problems for queer teens,” Bergh said. As a comedian, she wants to take those “bottled-up secrets” and “spill them everywhere.”

Bergh hosts Chunks at Powell’s and co-runs Performance Anxiety at the Pleasure Chest, the sex toy shop in Lakeview.

In doing so, Bergh hopes to “make an open space for everyone to talk about [their] life and not have it be something where you have to runaway from home because you can’t tell your mom who you’re dating.” For Bergh, comedy is about more than punchlines: it’s about telling stories.

As a storyteller and a blogger, Samantha Irby’s experience in the female comedy scene has been unique. Irby writes “Bitches Gotta Eat,” a wildly successful local blog about her dating and sex life or as she puts it, “farting on some guy’s dick.” Both on stage and in writing, Irby is radically honest.

“If you’re gonna come read my stuff...I’m gonna tell you the whole story,” she said.

Irby primarily writes for women, and she believes she gets the kind of response she does because she puts all her “failures and disappointments and scars out in the universe for people to relate to.”

"My insecurities are locked really tight and stacked really tall," Irby said. "In being super honest, I feel like I wrest some of that back. Yes, I went through it, but I processed it. I did it.”

Irby believes women do a disservice to each other when they only share the good parts of themselves — what she calls their “highlight reel.”

In addition to simply being honest, Dana Norris looks for topics that make her uncomfortable.

Norris is the host and founder of Story Club at Holiday Club, and she argues that the act of sharing your fears in public “creates a weird community,” one that she’s found “incredibly open and supportive” to her perspective.

“When I'm looking to write a new essay I try to look at the things that bother me — those tiny grains of sand that get under your skin," she said. "If it bothers you it means that there are unresolved questions there, that there's some substance to the subject. And you trying to resolve these questions can be funny or it can be sad but an audience really just wants to watch your mind work. They want to hear unique voices. You have one.”

“After my daughter was born, I felt a strong urge to share," Sandberg said. "Motherhood changed the voice that came out of me.”

She began writing on Facebook more often, commenting on others’ statuses and updating about her day, corresponding with her community in a “loose, vague” way.

This propelled Sandberg to do comedy.

“I wanted to pursue [creativity] in a bolder, more brave way," Sandberg said. "That’s what being a mother showed me: F*ck it. I can pull a person out of my guts. I can bomb if I want to.”

Since joining the comedy scene as a performer and stand-up comedian, Sandberg has noted the “male energy” in many spaces, where “feminist is still a dirty word.”

Sandberg related an experience where she performed with “a comic [who] did a really long set with tons of rape jokes and fat b*tch jokes.” She wondered, “Whose rape is hilarious? Is my rape hilarious?”

However, Sandberg said that she has found “many welcoming spaces for a 31-year-old mother of a toddler who goes to bed at 9 p.m.”

“I can imagine that 10 or 15 years ago that it would have been a dealbreaker to tell my fellow castmembers that I’m a mother,” Sandberg said.

At a time when more women are involved in comedy than ever before, Sandberg knows things are changing: “If not, I wouldn’t be here.”

Nico Lang writes about LGBTQ issues in Chicago. You can find Nico on Facebook, Twitter or Tumblr.