Chicago Public Schools has announced the long-awaited list of schools it wants to close.

The district wants to shut down 53 elementary schools—11 percent of all district-run grammar schools. Officials also plan to close a tiny high school currently connected to a grammar school.

If approved, this would be the largest single round of school closings ever undertaken in the country, and quadruple the number of school shake-ups Chicago has tried before in a single year.

The vast majority of the 30,000 impacted students are African American and attend schools on the South or West Sides, or near former public housing developments.

Another six grammar schools will see their staffs completely dismissed, in an effort to address chronic low performance. They are Barton, Chalmers, Dewey, O’Keefe, Carter, and Lewis. The management of those schools will be turned over to the nonprofit Academy for Urban School Leadership, an avowed favorite of Mayor Rahm Emanuel, boosting the group's total number of schools in Chicago to 31.  See the complete list of closures and other school shake-ups below.

Some of the proposed closings involve not only closures, but complicated relocations that will feel like closures even for receiving schools. For instance, the district wants to close May and Armstrong schools; their staffs would be laid off. Leland Elementary is named as the receiving school and would take in the May and Armstrong students. But the district is also proposing a relocation for Leland, to the May building. May would legally become "Leland," and house students from all three schools, headed by the Leland principal and staff. The original Armstrong and Leland buildings would be taken off line.

Initially, CPS pitched massive school closings as a savings measure in light of a projected $1 billion deficit. Thursday, district officials used other arguments: "Fundamentally this work is about improving the educational opportunities for our students," said Todd Babbitz, who's overseeing the closings for the district. "We do as a district today have resources that are spread much, much too thin. We are spending way more on buildings that we believe are unnecessary in our footprint."

District officials said they estimate closing the 54 schools will bring a total annual savings of $43 million. That's in a district with an annual budget around $5 billion. They also estimate the district will save $560 million in "avoided" capital costs over the next decade.

But the district is following the recommendation of the independent School Utilization Commission: "spend the money to do it right."  Chicago Public Schools is promising big amenities at receiving schools, like air conditioning in every classroom, iPads for all third through eighth graders, libraries for schools that don't have one, and new books. They’re also offering schools money for tutoring and mentors. The district is stepping up efforts to create safe passages to school for kids, and providing additional security once they’re there. Total one-year pricetag: $223 million.

School closings are being pushed across the country as a cost savings solution, despite studies that show they tend to save little money.

The Chicago Teachers Union is threatening major protests and acts of civil disobedience to oppose the proposed closings, which won't be final until they're approved by the school board, expected to vote on May 22. The union says the underutilization crisis is “manufactured” and is meant to create chaos in the system, opening the door to privatization. Parents and teachers have challenged the district’s calculations of what constitutes “underutilization.” School officials have not produced any demographic projections, either for the city or the neighborhoods.

In the affected neighborhoods Thursday, parents were reacting with anger about the uncertainty ahead.

Denise White walked her first grader to Overton Elementary in Bronzeville Thursday morning, and talked about her anxiety that her school could close.

A little later in the day, parents and community residents associated with the group Action Now took their protest over school closings to the homes of three members of the CPS Board of Education: Andrea Zopp, School Board President David Vitale, and outgoing board member Penny Pritzker.

Michelle Young said she’d just found out her children’s school, May Elementary, on the city’s West Side, is on the list to be closed.

“We need to elect a school board so that we can stop the cycle of rich outcomers coming to exploit low-income people like us,” she said. “This is a plan designed to fail, and when you design it to fail, our children will never get educated. They deserve that right!”

District officials said they avoided assigning students to receiving schools that were more than a mile away from their closing school.

Despite that, many parents are worried about the distances their kids will have to travel next year.

In East Garfield Park, a West Side neighborhood, the parents who arrived at John Calhoun North Elementary’s dismissal time to bring students home Thursday received a map showing where the district is sending their kids next year: Willa Cather Elementary.

Cather stands less than six blocks from Calhoun but far enough to raise fears about everything from winter temperatures to the neighborhood’s gang boundaries.

“How are they supposed to get back and forth?” Ardell Lewis asked, holding the hands of his daughter and grandson, both Calhoun students. “You got a lot of things going on around in the street: People snatching kids. So what do I have to do? Buy a car now?”

Kelly Wormley has five kids at Calhoun. They can walk together without her now, but not next year, she said. “Especially with me working at 5 o’clock in the morning, I’ll probably have to get somebody to take them school.”

That’s unless Wormley gets them into a charter school that opened in 2009 — right across the street from Calhoun.

Some of the district’s fiercest critics, including the Chicago Teachers Union, have charged that Chicago is creating its own crisis, aggressively opening charter schools at a time when enrollment has declined by 30,000.

CPS has said for months it faces a “utilization crisis” and has room for more than 100,000 additional students in its current buildings. In December it deemed half of all its schools—330 total—under-enrolled, with 140 of them only half full. School officials say closings are a move to “right size” a shrinking school district and spread resources across fewer schools.

“For too long children in certain parts of Chicago have been cheated out of the resources they need to succeed in the classroom because they are in underutilized, under resourced schools,” CEO Barbara Byrd-Bennett said in a statement e-mailed to reporters Wednesday night, after names of schools on the list began to leak out ahead of the planned release.

Even as it closes schools, the district has a commitment to open 60 new charter schools in the next five years. On Thursday, CPS also announced 11 "co-locations"--an arrangement where two or more schools share the same building. Five of the schools do not even exist yet.

Closures have also been pushed as a reform strategy in urban districts. The idea is to weed out low-performing or under-enrolled schools and seed new ones, often charters. The strategy has netted mixed results in Chicago, where it’s been tried for the past dozen years.

That’s meant a wrenching annual process of closing schools, which parents and the Chicago Teachers Union have fought bitterly.

Today’s list will come on top of more than 100 prior school shakeups and closings  since Chicago began the practice in 2001-02, under then CEO Arne Duncan.

It also brings a first: Chicago is closing down some of its original "renaissance" new schools. Williams Elementary and Williams Middle emerged from the ashes of one of Chicago's first "renaissance" school closures (Williams, Terrell and Dodge were the first to be shuttered, amidst mass protests, in 2002). The Dodge Elementary building will also be shuttered; that's where President Obama announced he'd invited Arne Duncan to be his Secretary of Education.  Dodge's principal, staff, and presumably students will move further west and share a building with Morton.

The district is also recommending closing a turnaround school. Bethune Elementary, in North Lawndale, saw its entire staff fired in 2009. The school was given an infusion of cash, taken over by the private nonprofit Academy for Urban School Leadership, and re-staffed. Now Bethune is slated to close. 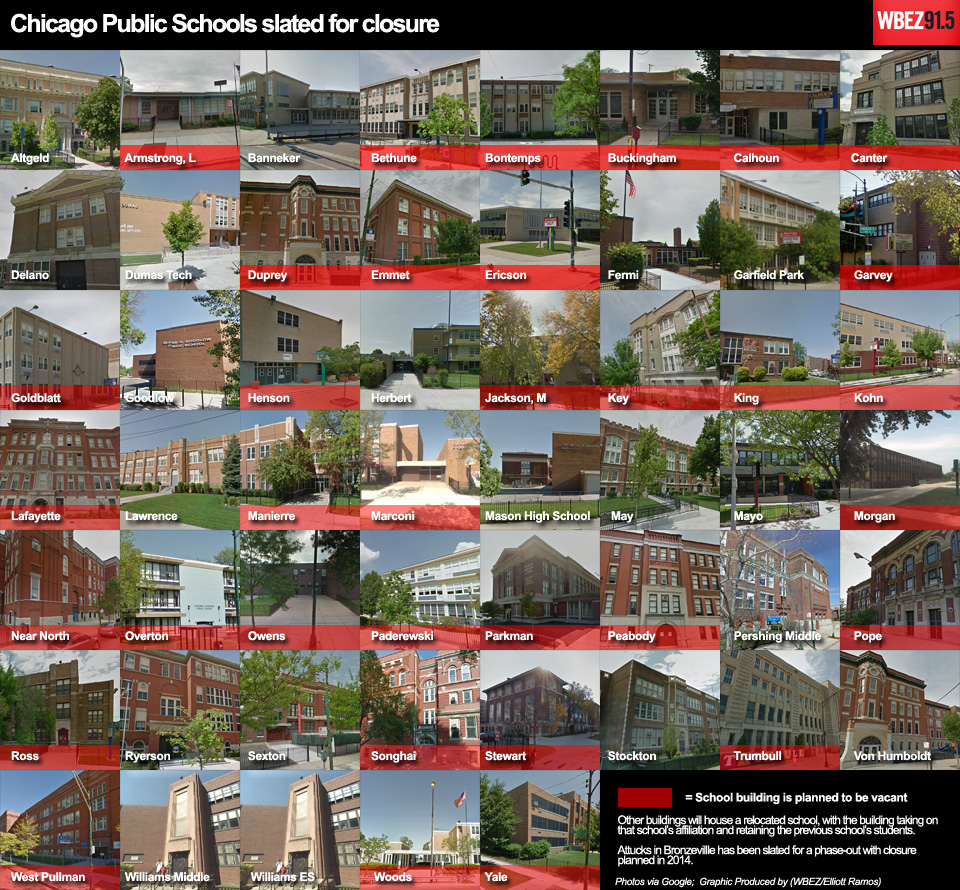 Update: The above graphic erroneously displayed a neighboring library for Delano, it's been updated with the correct image.