The first time Jonathan Salgado visited Harold Washington College’s Healthy Market in downtown Chicago, one of the items he grabbed was something he could eat right away: apples.

“There was days when I wouldn’t eat and that would distract me from classes because I’d be hungry or at work I’d feel a little lightheaded,” Salgado said, sitting in the Healthy Market wearing a bright orange vest from his job as student ambassador.

Jonathan Salgado, 20, is in his second year at Harold Washington. He transferred last year from St. Xavier University because the private school became too expensive. His sister just started at Harold Washington this fall. They both commute over an hour from Chicago’s East Side neighborhood where they live with their parents. Even though both parents work, Salgado said money is always tight.

“Sometimes there's no food or there's little food,” he said. “So since my parents feel bad, they won't eat so me and my sister can eat. And I see that and in return, I don’t eat so my parents can eat.”

For thousands of college students nationwide, choosing between buying books and their next meal can be a constant struggle. It’s why many colleges and universities in the Chicago area and beyond have set up free food pantries to help students avoid that tough choice and stay on track in school.

This month, City Colleges of Chicago is joining the effort to combat hunger among its students by opening pantries at three of their seven campuses. The goal is to open a permanent spot at five of the City Colleges by the end of the school year and two more by 2020. Many of their students are low-income, including adult learners with families, children of immigrant parents struggling to make ends meet, or students working themselves while they attend school.

“I think it’s more common than people think,” Salgado said of his struggles getting enough food. “People are scared or shy or maybe intimidated of saying it. And, I don’t blame them. I'm in that same position most of the time. I don’t go tell people I can't afford to eat.”

City Colleges Chancellor Juan Salgado (no relation to Jonathan Salgado) said this is the reality of who is attending college today.

“Unfortunately, incomes in communities, whether rural or urban, in many cases have not kept up with growing economy, so more students are in need of these supports,” Chancellor Salgado said.

The pantry is open two days a week for the entire day. Once a month, students can choose from a selection of groceries to take home. The market has everything from cereal and oatmeal to dairy products and fresh fruits and vegetables. A recent delivery also included lightbulbs. The school partners with the Greater Chicago Food Depository, which provides half of the food for free as well as a startup grant to purchase shelf stable items.

On a recent Thursday afternoon, Marissa Cirillo, who works at Harold Washington College Wellness Center along with a few student workers, helped a student and his mom sign up for the program.

As part of the registration process, Cirillo asked, “Since being at Harold Washington College, have you worried about your food running out before you had money to buy more?” The student answered the question on the iPad attached to the wall.

There’s no checkout process. Instead, there’s a sign next to each product that says how many students can take.

“We’re not trying to breathe down their necks. There’s no double-checking,” Cirillo said. “We’ll trust they’ll take the allotment they needed and that’s that.” 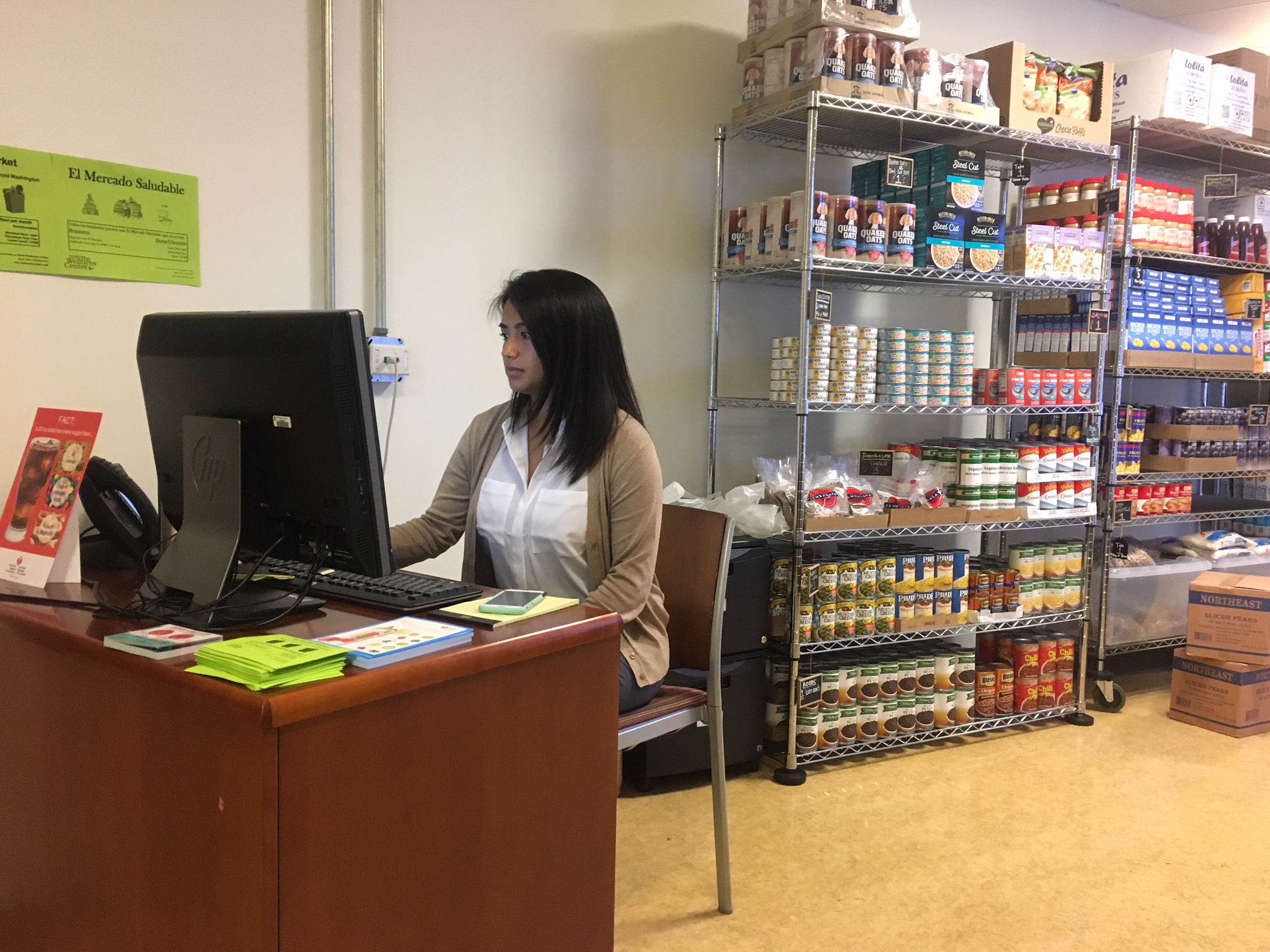 The community college system isn’t alone in trying to combat hunger among its students. University of Illinois at Chicago, Northeastern Illinois, and Governors State University all have food pantries. Chicago State plans to open one this year for students.

It’s an issue nationally, too. Last year, a survey conducted from the Hope Lab at the University of Wisconsin found a third of more than 20,000 university students surveyed nationally experienced food insecurity within 30 days of taking the survey. Some 42 percent of community college students agreed. The survey included local students from Governors State University, Northeastern Illinois, and Oakton Community College.

This week, the same researchers, now at Temple University in Pennsylvania, released a first-ever national survey on college campus food pantries. The survey found that campus food pantries have rapidly increased since 2012, but there is sometimes limited awareness of the pantries because outreach strategies can be informal.

Aurelio Valente, vice president of Student Affairs and Enrollment Management at Governors State, which started its food pantry in 2012, cautions that food pantries shouldn’t be where student services end. At GSU, leaders use it as a starting point to address other issues students might have.

“Sometimes food pantries can be seen as a panacea, a solution to all problems,” Valente said. “People point to it, and it sounds familiar, but it’s not the solution to everything. It’s a gateway to a full array of resources to help address food and housing insecurity.”

“What they're good at is instigating the broader conversation on campus,” she said. “So, I don't think it should be viewed as a solution, but I do think it’s probably part of the process toward one.”

Jonathan Salgado said having open conversations about the need among students would help.

“I get kind of embarrassed thinking like, ‘Oh I'm walking out with a bag of food and I don’t know how people are going to be thinking of me,’” Salgado said. “But at the same time … you feel kind of grateful. And then afterwards, you go home and you're going to get to eat and not starve, and that feels kind of good.”

Leaders at City Colleges say they understand that stigma, which is why they’re calling the food pantries “Healthy Markets.” That way, students might feel more comfortable getting the help they might need.