You might remember making lanyards and mosaic trivets at camp, but at Grrls’ Meat Camp in northwest suburban Volo, Ill., the Saturday morning activity was Whole Carcass Utilization.

The carcass in question was a 205-pound hog who began the morning stretched out on its back on a picnic table. It had already been emptied of guts, so the first order of business was to saw off its legs, as well as its most distinctively piggy part.“What are we gonna do with the head?” asked Chicago butcher Kari Underly. “Does anybody have some things they want to do with the head? I know you mentioned some head bacon?”It’s not often that women who work with meat get to, well, meet up. Female butchers are few and far between. And if you want to become one, you have to carve out your own opportunities.

That’s why 16 far-flung women packed up their knives, their cleavers, their sausage casings, and a number of lovingly cured prosciuttos and salamis for Meat Camp.For most of the morning, the severed pig’s head continued to sit on the picnic table, appearing to watch the campers as they went about turning the rest of the carcass into products you might feel more a little more enthusiastic about finding in your local market.Kate Hill stood at another picnic table literally up to her elbows in pork that had already been put through the meat grinder, and asked someone, “Could you pull up my sleeve?”She was gently squishing it up the way you do when you make meatloaf, except she was making paté. Hill teaches charcuterie at her house in the south of France, including visits to local farms to see how the meat she works with was raised. Meat Camp was her idea: “To get together, to share experiences and learn, and you can see there’s a spirit of sharing and showing and telling what you do and how you do it, and that’s the premise of it,” Hill said. “I wanted to keep it fun and light, and that’s why I called it Grrrls Meat Camp, instead of something serious, like A Conference about Women and Meat.” 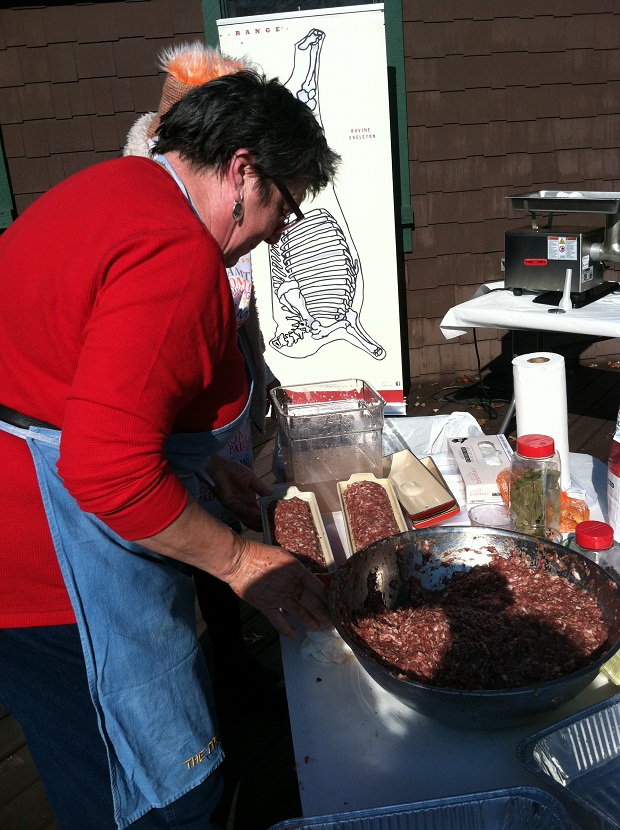 It IS fun and light. But it’s also a unique educational opportunity if you happen to enjoy poking around inside a dead animal with a knife. Over at another picnic table, Chicago butcher Kari Underly helped one camper identify and remove the pig’s eye of round.UNDERLY: So we’re gonna grab the knife, and it’s gonna start here, so let’s release right there. So what are you feeling right now when you’re doing this?

CAMPER: It’s like, yeah, you can tell where it wants to release a little bit, and that’s normal?

Underly, who helped organize Meat Camp, is something of a rockstar among American butchers. She’s most famous in meat circles for winning an online video contest called “Who’s Your Butcher?” and for her recent James Beard Award-nominated book, The Art of Beef Cutting.

Both her grandfather and father were butchers who practiced an artisanal craft that’s been nearly wiped out by the industrialization of meat. Her father’s shop got put out of business by competition from big-box retailers.
“I saw what it was like when my dad came home from work after hanging beef changed to box beef and how it changed something within his soul,” Underly said. “It’s like, I wanna bring THAT back to the community. At the core of my heart is training and education, and I have a dream, and I’m working on a business plan opening up a school to bring the trade back … teach them the economics, teach them what to do with the fat, with the jowls, so we’re not going to waste, and they can go back in other environments and build businesses.”

There were other lessons these women were learning from that hog carcass, as it went piece by piece into sausage casings and the smoker and the paté molds.

For Lilly Baker, who used to work on a goat farm before moving to Chicago, breaking down the pig was one more step in the evolution of her thinking about meat-eating.

“I’ve been vegetarian in the past,” Baker said. “And after being around domestic animals, and participating in the slaughter, and now the breakdown, and seeing how that animal really turns into a finished food product, I definitely have a lot more respect for that myself. And I’m more comfortable eating meat that I know has been respected at all points in the process, from when it was born to when it ended up on my table, and maybe less comfortable eating meat that wasn’t treated in that manner.”

And for Rachel Miller, the sous-chef at a super-hip restaurant in Cambridge, Mass., called Bondir, the lesson was about something else. She relished the all-chick vibe.
“I love it,” Miller said. “It’s a lot more comfortable. I hate to end up sounding sexist on the other end of it, but, it IS a man’s world, in the butchering and the cooking. It’s been hard enough findin’ short-order cooking jobs as a girl. That’s what I really love about the energy here, is that it’s not domineering, it’s not a pissing contest, which gets really old.”

What Miller was learning at Meat Camp had everything to do with the sustainability of the butcher —especially the female butcher.