About 260 Northeastern Illinois University students may be forced out of their campus jobs because of a new rule put in place as a result of the Illinois’ ongoing budget impasse.

Since Jan. 1, state universities haven’t been getting any state money because lawmakers and Gov. Bruce Rauner have not approved a budget. Court orders have kept much of the state government operating, except for universities and social services.

Each university is affected differently by the impasse, depending on tuition rates, enrollment and available cash reserves.

But a new rule put in place in December by the State Universities Civil Service System, the organization that administers university employee rules, is creating new headaches for Northeastern officials as they try to save money. The rule states that if a university is going to force its employees to take unpaid days off, then it has to prove it’s doing what it can to save money by first kicking students out of their part-time campus jobs.

Northeastern is believed to be the first Illinois school to be pursuing furloughs that will trigger this new rule.

“I can’t figure out right now a way around it. And I just find that exasperating,” said Richard Helldobler, the interim president of Northeastern.

A university spokesman said if the school goes through with the furloughs, it’s unclear how long the students will be out of their campus jobs.

Helldobler said the state currently owes Northeastern $17 million and over the last few years, the university has taken several measures to save money, from reducing personnel by more than 100 positions to furloughing many of its employees for six days last year.

But that was before the rule about getting rid of student employees was put in place. This year, Helldobler said he faces new problems as he seeks another round of furloughs.

“It’s hard looking your community in the eye and saying, ‘I’m sorry for the second year in a row (that) you’re gonna have to take a pay cut.’ It’s harder to look into a student’s eyes, who are really trying to get through school, and saying, ‘I’m sorry. I have this stupid rule. I have to follow it and I may have to lay you off.’ That’s wrong,” he said.

For Northeastern students like Tasiana Villalobos, losing her two campus jobs as a writing tutor and answering the phones would mean losing 12 hours of pay. But Villalobos said the loss in pay isn’t what bothers her about the situation because she can ask for more hours at her third job at Home Depot.

Instead, the senior communication, media and theater major said she’s upset that she and other tutors would lose out on the writing skills they’ve gained from helping other students.

“I think it just sucks all around and nobody should have to feel like they have to lose pay when they deserve to be where they’re at,” Villalobos said.

She said being personally affected by the ongoing budget impasse, which is approaching its 20th month, is “uncomfortable to handle and grasp.” 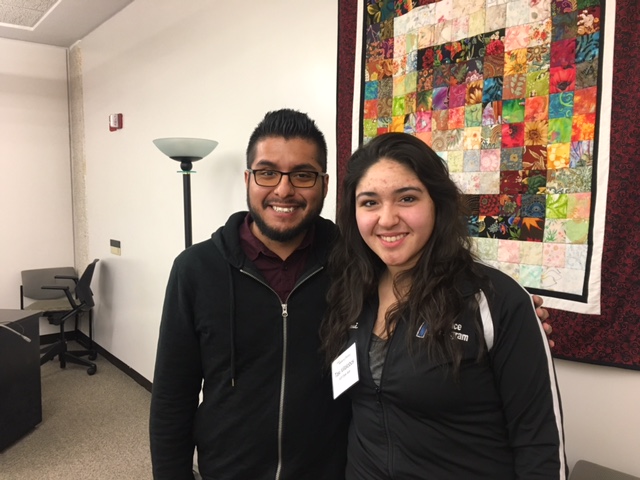 But it’s also an uncomfortable situation for Jeff Brownfield, who helped write the new rule.

“We’re just hoping that through this program, student services can be spared as best they can,” said Brownfield, the executive director of the State Universities Civil Service System.

Brownfield said the budget impasse is putting entire university departments across the state -- not just at Northeastern -- in jeopardy, as other schools pursue ways to save money.

He said the new rule is a way to ensure Illinois universities are saving money everywhere they can before making their full-time employees take unpaid days off, because those full-time employees are also part of what he called an “impossible situation.”

Brownfield said the rule is for “those employees that may be facing a furlough who also may have kids they’re putting through college or just kids that they’re putting food on the table (for).”

There are a few exceptions to the rule. Students who receive academic credit as part of their campus jobs can keep their positions. So can students whose jobs are tied to their financial aid.

Brownfield said he hopes the rule can expire at the end of September and there won’t be a need to renew it, because lawmakers and the governor will have agreed on a full state budget before then.

But if there is no budget agreement, Brownfield said he may recommend the rule stick around longer as more universities consider furloughing more employees.

Tony Arnold covers state politics for WBEZ. You can follow him at @tonyjarnold.