Johnny O’s is a classic Chicago hot dog place. It’s got the red and yellow Vienna Beef menu, the late-night window on the sidewalk, liquor and groceries for sale inside.

On Mondays, you can get a $2.89 pulled pork sandwich. On Thursdays, it’s Sloppy Joes. And lately, on the third Friday of every month, you can sample some merlot or petite sirah.

The 49-year-old Bridgeport hot dog stand and liquor store at 35th and Morgan is offering once-a-month wine tastings in hopes of drawing in some of the newer arrivals to the neighborhood, including young artists with studios nearby and folks who’ve bought half-million-dollar homes in the area.

“The idea is just to bring some new faces in here. Lot of these people from the neighborhood go to the art gallery things on the third Friday — bring ‘em over here,” said Alex Veliotis, whose father John Veliotis started this business as a bar and grill back when factory workers flooded the area for three shifts of work.

The Bridgeport Art Center and the Zhou B Art Center both host art events the third Friday of every month, bringing visitors to the area. This month, about 50 people wandered over to Johnny O’s “dining room” for the wine tasting. The dining room is a barebones space of booths, tables, and a bar that’s opened just for these events. A DJ spins records. Above the door outside, a set of rigged up multicolored lights flashes to the beat of the music.

On the bar were a half dozen bottles of wine. Al’s brother, Johnny O’s co-owner Pete Veliotis, helped pour wine and took pictures to put on the Johnny O’s Facebook page. Revelers sampled the vintages, but if you’re concerned about a classic hot dog stand going too high brow, samples were given out in plastic condiment cups. 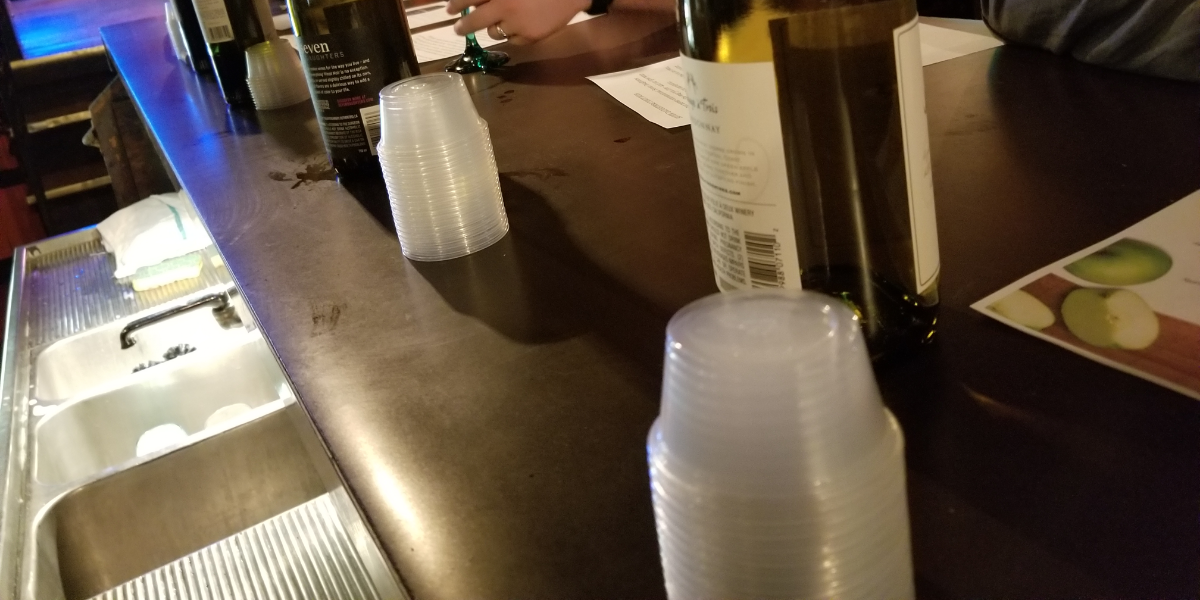 Lauren Karcz was drinking a glass of chardonnay.

“Asked for a merlot, but obviously the wine tasting is flowing, so they’re out of it. I’m going with the chardonnay here, folks,” she said, laughing. Karcz, who works in marketing, lives in the condos across the street. “I’m from the suburbs. My fiancé and I moved out here about three years ago and we love it. We’re big fans of Johnny O’s.”

Karcz was at the art shows earlier. “Bridgeport is being built up — you literally feel like you’re walking in Naperville. … It’s family friendly … . Very artsy, lot of stuff to do.”

For people who grew up in the neighborhood, the idea of Johnny O’s hosting a wine tasting is mind bending. 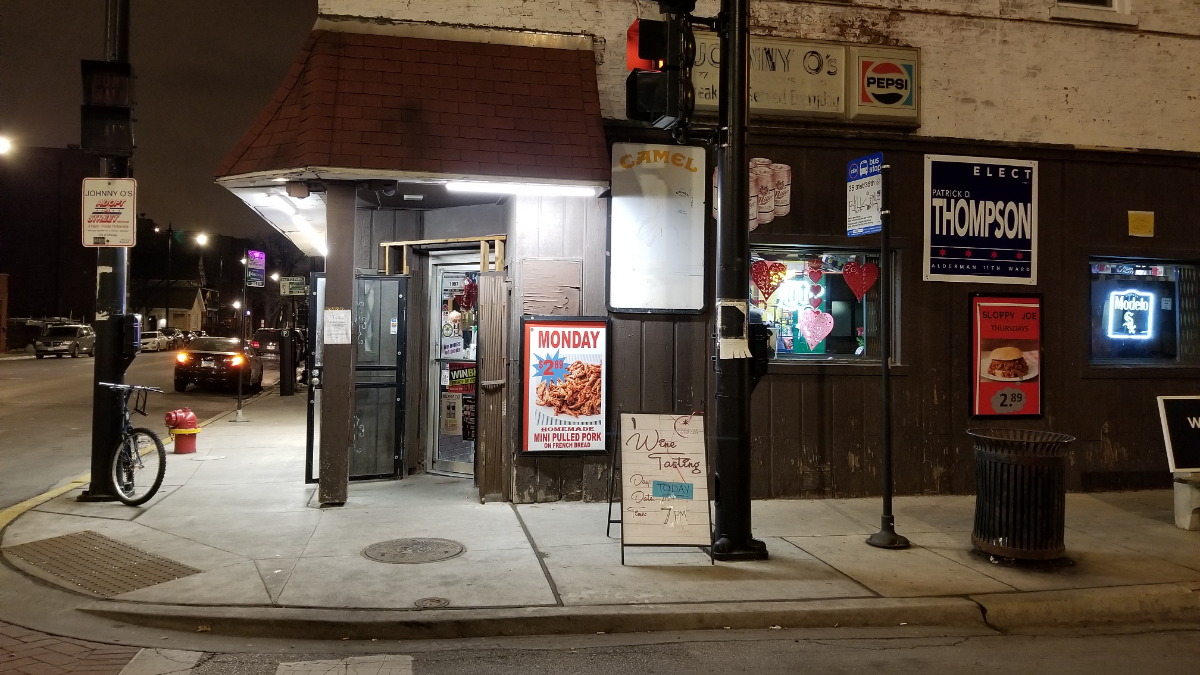 “Johnny O’s was the dive spot,” said Chaz Reza, who grew up in Bridgeport. “It was the place where all the drunks would go to get their food late at night or early in the morning, hung over. And then to see it now, it’s almost fashionable.”

Reza’s neighborhood pal, Mike Stewart, said he's seen other businesses in the neighborhood pander to newcomers and their money, but he doesn’t feel like that’s happening here. The plastic condiment cups help, he says.

“I think that keeps to the original Johnny O’s spirit. … (Al) is embracing what (Johnny O’s) could be, because it’s never going to be what it was,” said Stewart.

All this was factory area

When Johnny O bought this place, it was surrounded by factories. Just across the street was the Spiegel catalog warehouse, which processed catalog orders from all over the country. The company owned multiple five- and six-story buildings, and put an iconic pedestrian bridge across 35th Street so workers wouldn’t have to go outside to cross the street.

“If you were going to a Sox game, you knew you were in Bridgeport by the (Spiegel) walkway,” Al said.

“All this was factory area around here,” Al said. “All these art buildings was Spiegel’s, up and down the street here.” 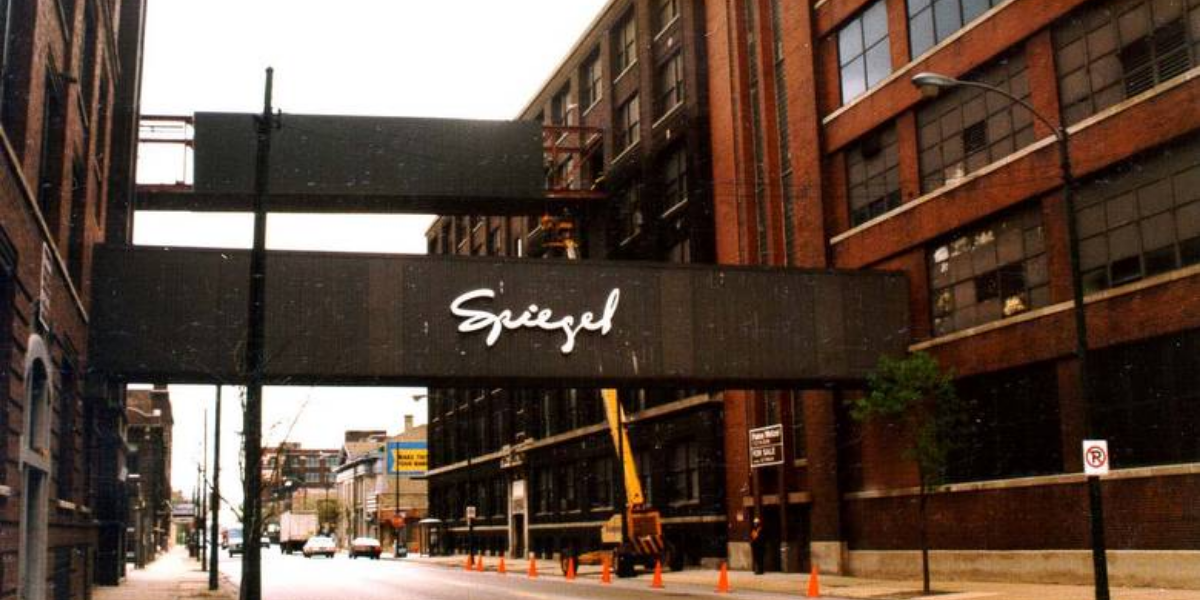 Three shifts of workers meant three crazy shifts at Johnny O’s. Back then, Johnny O’s was a bar and grill, and it was never empty. As a kid, Al re-filled beers and raced between the hot dog stand and the tables.

“My mom was the deli queen. She’d whip up a couple hundred sandwiches a day. We used to have racks with all the phone orders. You’d have 40 deep outside, you’d have 30 deep in here with the lottery. You’d have 200 people there.

“And on every block you had at least two ma and pa bar and grills like us,” said Al.

The Spiegel company had been in Chicago in one form or another since 1866. It was the biggest employer in Bridgeport, with 2,200 employees.  And then, in the early 1990s, it all came to an end. “Spiegel‘s left, and when they left, all these other companies followed suit,” said Al. “Every one of these ma and pa places closed down.”

Johnny O’s hung on. They pulled the booths and tables out and added groceries and liquor.

But Johnny O himself was not a fan of change, said Al. 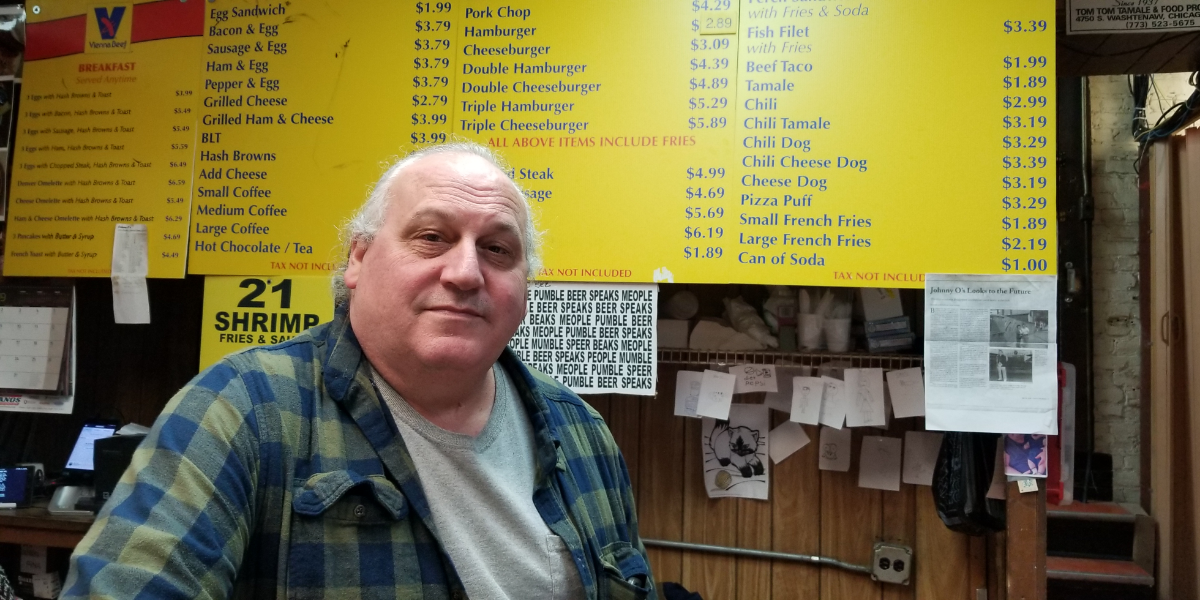 “He would fight anything we had new here. When we opened up the store, we had three pyramid piles of beer: Bud, Old Style, and Schlitz. And we’re like, ‘Ah, dad. We’re gonna have to beef this up a little bit. We’ve got a lot of Mexican guys down the street, and they want that Corona beer,’” Al recounted.

“We’re gonna have to get that Michelob too, and maybe that Heinekens,” Al and his brothers would tell their dad.

Al says his dad was “hard for change.”

“Every time we had to do something, it was kicking these buckets, throwing stuff,” said Al. “But, you know, we had to adapt.”

Johnny O passed away two years ago, but he still feels larger than life at his namesake convenience store and hot dog stand.

He started selling hot dogs from a pushcart outside the Spiegel warehouse at age 12. In 1959, he bought his first brick and mortar place near 31st and Halsted in 1959, Johnny O’s Famous Beef Stand.

He was well-known as a crooner, so much so that the White Sox once asked him to sing the national anthem. So Johnny O, the family, and a slew of customers all walked down 35th Street to Sox Park.

“That was the one and only time we closed the tavern down at 5 o’clock. And we took about 60, 70 people with us,” Al recounted. 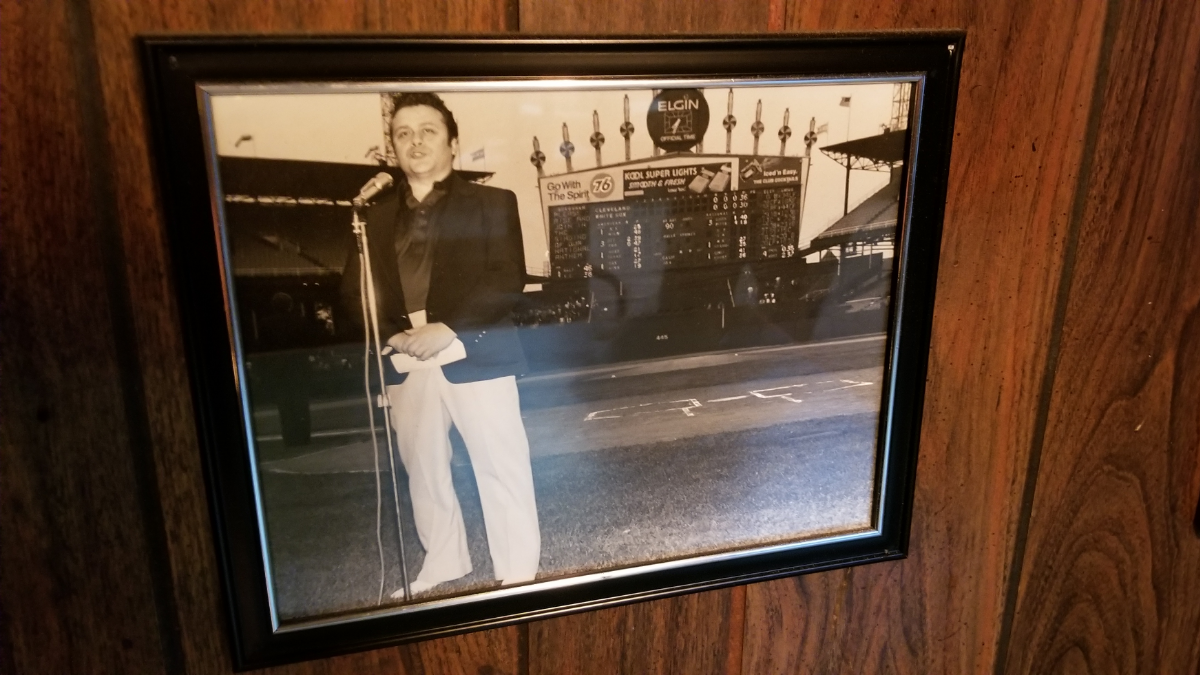 Today, townhomes stand where the Spiegel workers used to park. The warehouses are now art studios and galleries. And Johnny O’s feels caught between what the neighborhood used to be and what it’s becoming.

So what would Johnny O have thought about wine tastings?

“He’s probably turning in his urn right now,” said Al. “’What the hell?!’ But he knows that we’re still hustling.”

Al’s brother Pete has been working hard to modify the “dining room” for the wine tastings, and the two owners are hoping at one point to open a “barcade,” which Al described as “a bar slash pinball arcade for grownups.” They have them on the North Side, Al said (though he figures the last time he visited the North Side was “eight or nine years ago”).

As they paint and remodel the space, Al has insisted the old photos and news clippings stay, along with the wood paneling.

“The old-school crap. I might have a little club over here with some flashing lights, but we’ve gotta have the old pictures. That’s who we are. This is Johnny O’s!”