The village of Palatine sits about 30 miles northwest of Chicago. It’s marked with a water tower you can see from I-90.

Like a number of our suburbs here, Palatine was founded around the 1830s by settlers leaving Chicago’s Fort Dearborn, who walked along various Indian trails until they found the right spot.

That spot, now Palatine, had its own trading post and railroad station by the 1850s. And the population kept growing. Now, Palatine is home to about 70,000 people. And it’s also home to the state’s largest space-themed roller rink, and a mini golf course located in the basement of a funeral home.

Sandra Levin bought Orbit Skate Center in 1992. In this audio clip, she talks about why she bought a skate center, of all places, and what that means to her:

We also meet Ryan Breede, an employee at the rink who’s been skating for about 15 years. We convince him to teach us some skate tricks. Surprisingly (not), we’re both pretty rusty. And yes, we do operate a camera on a tripod on roller skates. But Justin Bieber and disco lights keep us motivated. You should really just watch this whole ordeal on your own:

All of those new moves really work up our appetite. We want energy for the trek ahead: the journey into the basement of Ahlgrim Funeral Home.

So we get a bite at a place suggested by Sandra, our roller rink owner: The Palatine Inn. She adds there is a museum of the village’s history in the restaurant, and that maybe we would find it useful for our story. 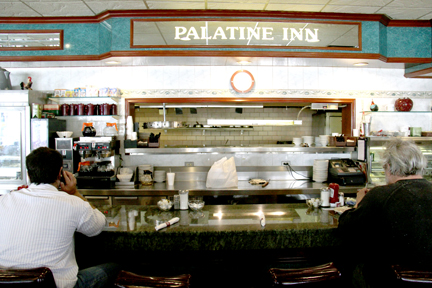 Turns out, the museum is more of a one-wall grid of framed pictures once used in a calendar featuring some of Palatine’s memorable history. This includes a human pyramid of Palatine’s Mens Athletic club from 1918, mustached men playing cards at a saloon in 1900, an aerial view of the village from 1929.

We stick around for the food. The Palatine Inn is the type of place where matzoh-ball soup, a BLT and rice pudding just seems like the right choice.

Around 2 p.m., we start heading to Ahlgrim Funeral Home, but get sidetracked by Spunky Dunkers along the way. Spunky Dunkers is a doughnut shop owned by three sisters who have kept the place in its original everything. It’s clean and cozy and lined with chrome bar stools under big windows. Newspaper clippings and photos of past employees are spaced evenly throughout the walls.

One of the workers, Doreen, has been there for about 10 years. She says she’s not really a doughnut person, but she sticks around for the customers. Sometimes they go to brunch in a nearby town or play cards on weekends. She says her customers would kill her if she quit. 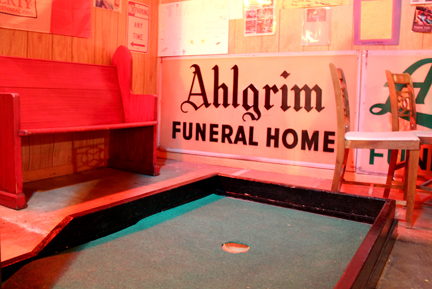 We finally get to Ahlgrim Funeral Home. We were excited about coming here long before we even started our drive: It came up in a search of mini golf places one day, and we’ve been scheming how to get here ever since.

The funeral home itself is familiar to people in Palatine - it’s been around since the 1960s. But not everybody knows there’s a death-themed mini golf course and arcade in the basement.

Bradford Hein, Ahlgrim’s funeral director, explains how this whole thing got started and why it seemed a natural fit to open a golf course in the basement:

He goes on to explain the creative ways to bury people these days:

Rob Wildeboer is the criminal and legal affairs reporter for WBEZ. Logan Jaffe is a web and multimedia producer for WBEZ and Curious City. Follow her @loganjaffe and @WBEZCuriousCity.