Dozens of senior residents who live in public apartment buildings across the city blasted Chicago Housing Authority leaders on Tuesday, protesting chronically broken elevators and what they say are other dangerous living conditions.

The protests come on the heels of a Better Government Association/WBEZ investigation that exposed elevator problems that plague the CHA’s elevator-equipped buildings, most filled with senior residents.

“CHA board, replace the elevators now!” the group of senior citizens chanted as they briefly interrupted a board meeting at the CHA’s Loop headquarters.

Carmen Betances, 66, a resident of Elizabeth Woods Apartments in Lincoln Park, was among the group of seniors and said she wants the agency to address numerous dangerous conditions.

“Those elevators are shut down very often and we have to use the stairs; many seniors are unable to climb up stairs,” Betances said in an interview after she was escorted out of the board meeting at the behest of commissioners. She later joined about 50 protesters in the building’s lobby where some held signs that read “CHA: stop killing us” and “Seniors deserve better.” 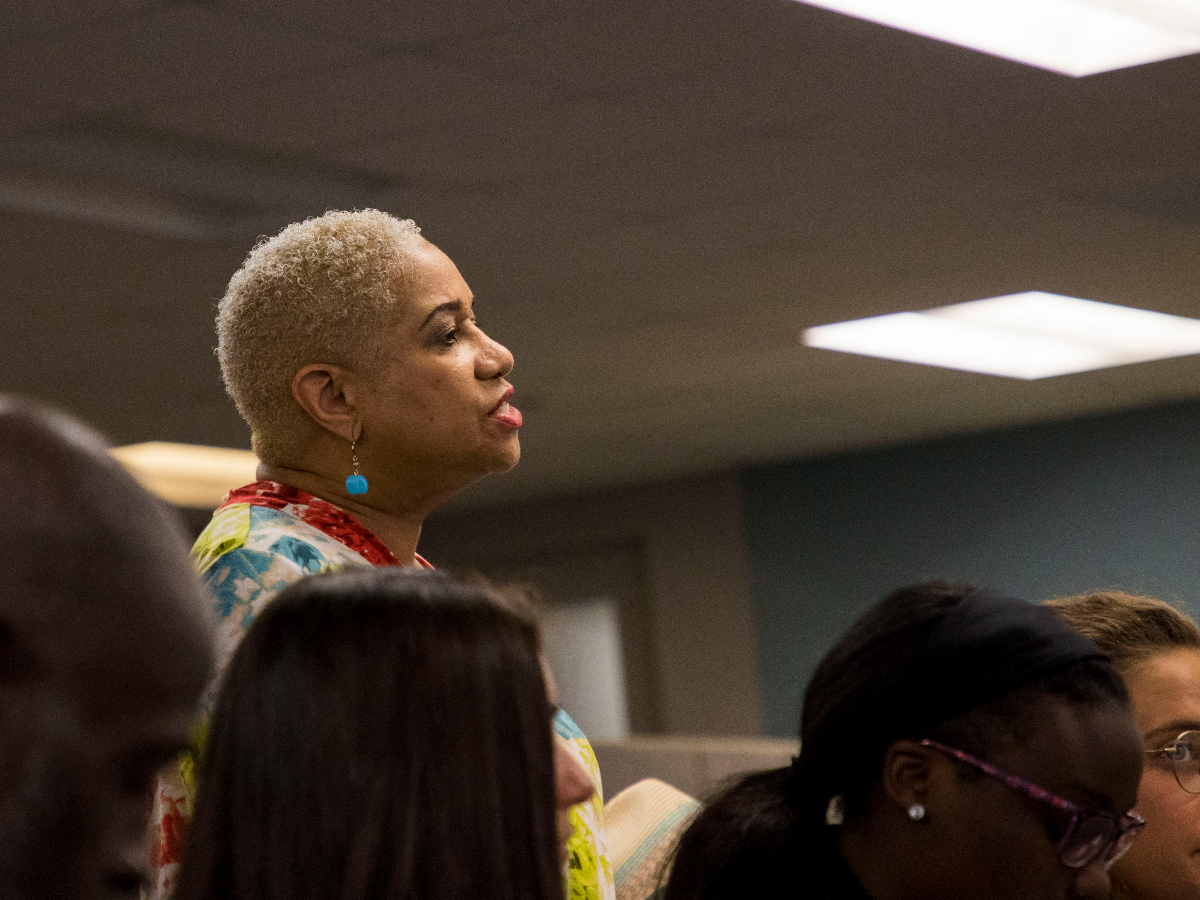 Jeliner Jordan, 74, said seniors were angry and traveled to the CHA offices to voice several demands that went beyond elevator problems. They also complained many apartments lack grab bars in buildings for seniors and lack adequate heating and cooling systems.

“CHA is letting seniors like myself live in dangerous conditions,” said Jordan, a resident of Zelda Ormes Senior apartments on the city’s North Side. “And we are here to tell CHA CEO Eugene Jones and the members of the board of commissioners that they are treating us like our lives don’t matter.”

Jordan, who was among the seniors who spoke to the BGA and WBEZ about elevator problems in her building, and other seniors who attended the protest are members of Jane Addams Senior Caucus, a grassroots organization that advocates for seniors living in public housing.

CHA Board Chairman John Hooker, a former ComEd executive, said the problem is being addressed.

“I’ve heard so much about the elevators and we know that they are bad,” said Hooker, sounding exasperated. “We put a contract out to fix them. What else can we do? I can’t go back and repair 20 years.”

After the board meeting was disrupted, other seniors voiced their frustrations during the planned public comments segment, telling the commissioners they feel unsafe.

“I want to have a quality of life that I deserve at 71 years of age,” said Brenda Perry, a resident of Lincoln Perry Apartments on the city’s South Side. “All I asked for was clean and safe. I didn’t ask for other amenities — clean and safe. I ain’t even got that. Please, I beg. Do it.”

Beyond the protests, the seniors also delivered a letter to Jones and board members stating that management inaction could lead to harm.

“You have endangered our lives by allowing us to ride in elevators out of code,” the statement read. “We are outraged that you continue to put the profit of private developers and politically connected contractors over our own lives. This is not acceptable.” 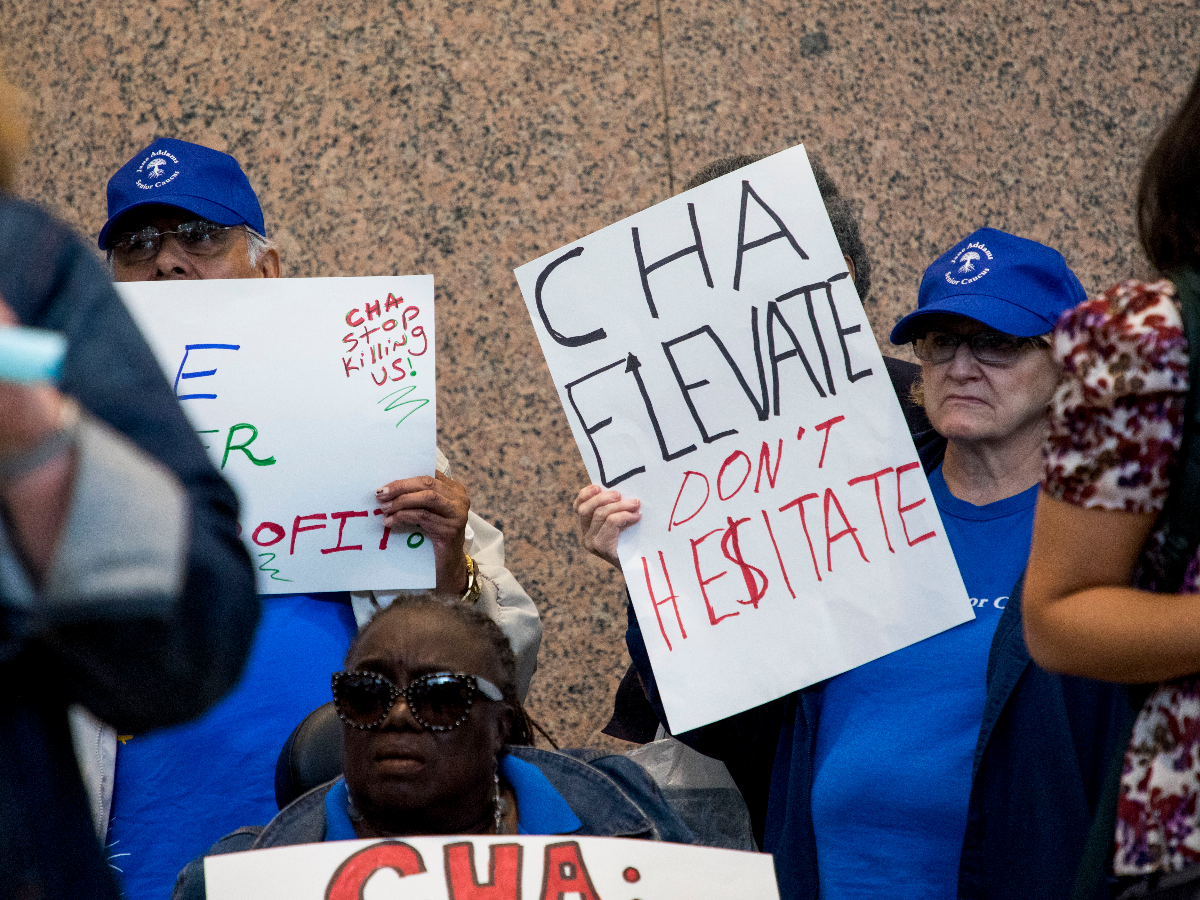 In a written response, the CHA said it is committed to providing high-quality, affordable housing to all its residents.

“The well-being, safety and comfort of its senior residents, in particular, have always been an agency priority. It is important to note that CHA seniors are safe, their buildings are safe and, the elevator systems are safe,” the CHA statement said.

Last month, the CHA unveiled a $25 million elevator modernization initiative, an announcement made as reporters for the BGA and WBEZ were wrapping up a months-long investigation into the agency’s elevators and seeking answers from officials. The investment is in addition to an earlier $3.5 million contract to assess 150 of its elevators and prepare a comprehensive plan for repairs. The CHA, however, has yet to hire a company to fix the elevators. The agency has said the initiative should be completed by 2020.

The agency’s elevator initiative comes after residents said frequent complaints about elevators were largely ignored, the BGA/WBEZ probe found. Such complaints mounted even as the agency spent $480 million in recent years to modernize its buildings. It is on-track to complete another $152 million in upgrades this year.

A slice of those payments went to improve the appearance of high-rise elevators, records show, but balky mechanical systems that are often at the core of safety issues were not addressed.

Hundreds of residents have been trapped in recent years inside failing and unsafe elevators at high-rises owned and operated by the agency. And that doesn’t even count the many routinely trapped in apartment building lobby areas or in their apartments.

The investigation also found elevators remained in disrepair despite repeated citations for safety violations and flunked safety inspections. The majority of CHA elevators failed an inspection in 2015 and no elevators were inspected in 2016, despite a city requirement for annual inspections.

Both the CHA and city, which oversees all elevator safety, insist the agency’s elevators are safe.

CHA elevators, however, have failed inspections for the types of issues the city said might prompt inspectors to shut down elevators, including problems with failing emergency communications systems and alarm bells and malfunctioning door locks.

Alejandra Cancino is a reporter with the Better Government Association.