For years, Chicago Mayor Rahm Emanuel has been staunchly opposed to allowing video gambling machines at bars and restaurants in the city, hoping instead to land approval for one big downtown casino.

But unregulated devices that look and work almost exactly like video poker machines are popping up in places all over Chicago.

Thanks to these machines — often referred to as “sweepstakes” — the city has become studded with what effectively are mini-casinos in gas stations, convenience stores, and even a laundromat.

Unlike the video poker machines that the state has regulated and taxed since 2012, the other machines don’t pay state or local government. And the state does not conduct background checks of sweepstakes machine operators or the businesses that install them, as is required for video poker licenses.

A WBEZ investigation found some bars that were deemed unfit for video gambling have simply installed sweepstakes machines instead.

In Streator, a small city about 100 miles southwest of Chicago, you can gamble at sweepstakes machines in a tavern that was denied a license for video slot machines because state inspectors allegedly had uncovered multiple incidents of illegal sports gambling at that bar, records show.

For Streator and other Illinois cities that allow video gambling, the slot like machines are providing unauthorized competition to licensed operators, who generate much-needed tax revenue.

The Illinois Gaming Board has maintained for years that sweepstakes machines are illegal. But efforts to crack down on them have encountered legal roadblocks in the past year.

The murky laws have allowed more and more businesses to offer the machines to their customers, officials said, even in some seemingly unlikely places.

On Chicago’s Northwest Side, the Bubbleland coin laundromat at Elston and Kimball has three sweepstakes machines in a corner near the entrance. One of those machines issued a receipt to a reporter who placed a bet and won. The laundromat attendant took the receipt, disappeared behind a door, and quickly returned with cash winnings. 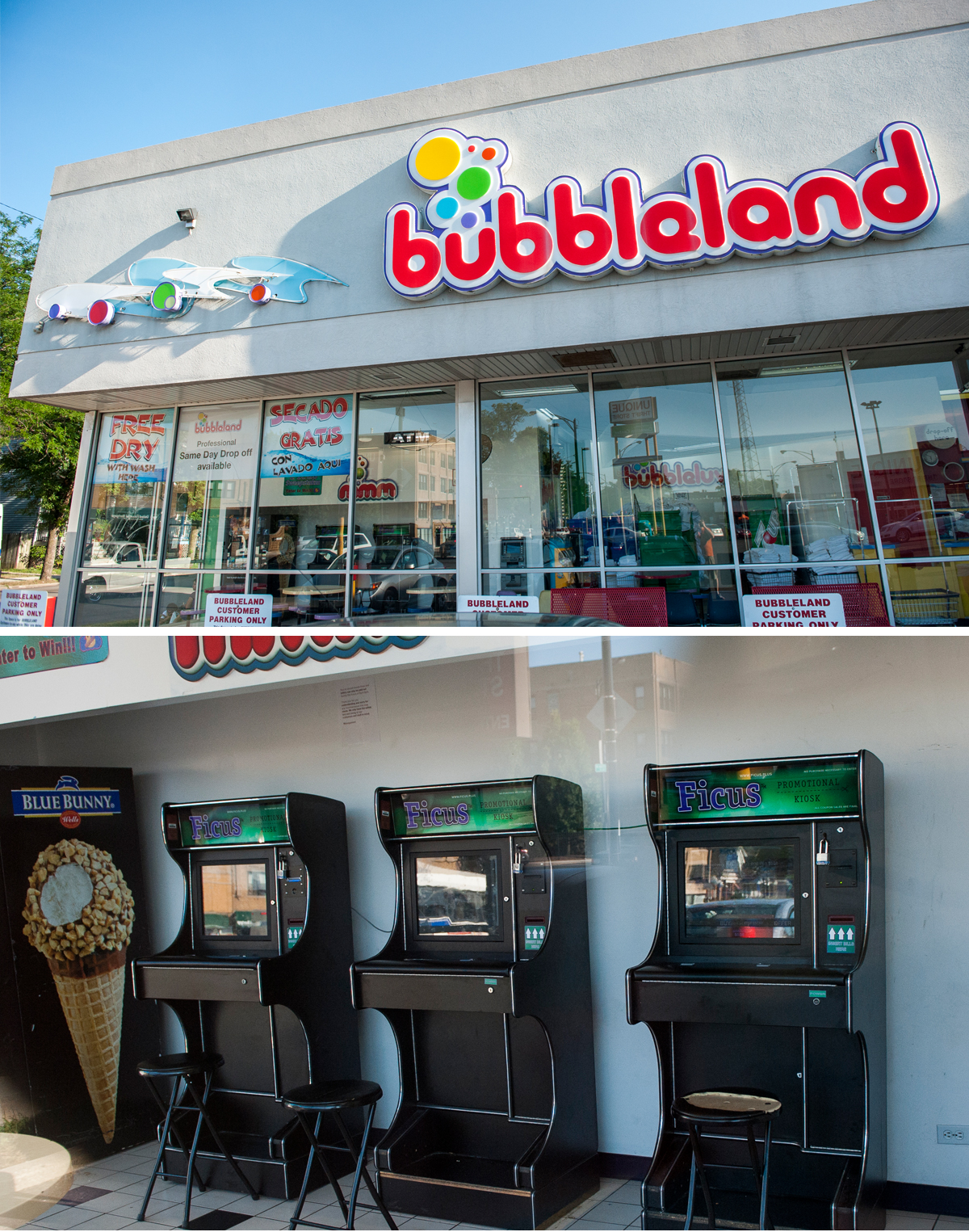 Democratic state Rep. Jaime Andrade, who lives a few blocks from Bubbleland, said the laundromat is one of many businesses that have recently installed the machines in his district.

“They’re popping up everywhere,” he said in an interview at Bubbleland. “I’m looking at the machine right now. I see diamonds. I see sevens. I see cherries and lemons. That, to me, looks exactly like a video gambling machine. There is no difference.”

But there’s a significant difference for taxpayers.

State legislators legalized video gambling and began to collect revenue six years ago. The licensed machines give 25 percent of their take to the state and 5 percent to local government.

Through the end of June, that’s meant more than $1.2 billion for the cash-starved state and another $250 million for cities and villages that have allowed video gambling, according to gaming board records.

In Chicago, though, Emanuel repeatedly has shot down the suggestion that City Hall allow video poker. The mayor says he prefers to limit gambling — which is currently banned in the city — to one casino at a central location.

“I’m opposed to video gaming,” Emanuel said in 2015 after an alderman introduced a proposal to allow it. “I don’t wanna see it spread throughout the city of Chicago. I don’t think that’s good for the type of city we want to have.”

The City Council also is now considering a newly filed ordinance that would end the practice of sweepstakes machines in Chicago.

A co-owner of Bubbleland declined to comment on the machines. Nor would an owner of the Northwest Side Mayfair Marathon gas station near Elston and Lawrence — which has no less than 12 machines under a banner promoting “slot style games” that promise potential “jackpots” to players.

On the city’s West Side, a new business apparently offers nothing other than the chance to gamble at more than 20 sweepstakes machines. The sign above the entrance to Spin City, in a strip mall at 6522 W. North Ave., boldly advertises “SLOTS.”

Yet you need to ring a buzzer to be let in through a locked door. Inside, machines line both walls and two black leather couches. 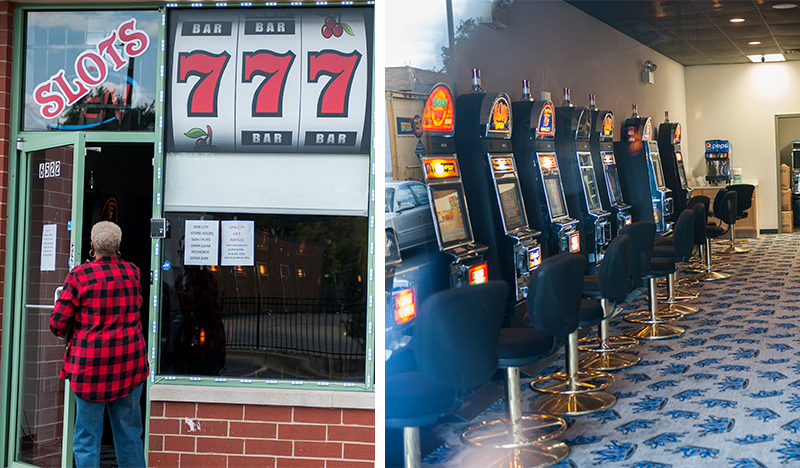 According to a piece of paper taped last month to the front door of the storefront operation, three gamblers there hit the jackpot in the past three days.

“This really looks like a casino,” the alderman said of Spin City, which opened in February. “This is something that should have been brought to the community and the neighborhood in this area before they opened up. I’m certainly against it and I know my constituents are as well.”

According to the business license application that Spin City’s owner, Anthony Todd Sutton, submitted to the Emanuel administration, there is no mention of sweepstakes machines. The application merely said Spin City would sell “general merchandise.”

The city cited Spin City last month for “failure to disclose all activities carried on” there. According to the ticket, the business was “found to be facilitating gambling.”

Taliaferro said he had repeatedly asked Emanuel administration officials do something about Spin City.

“If we can get them for filling out a false application, then hopefully we can get rid of that business,” Taliaferro said. 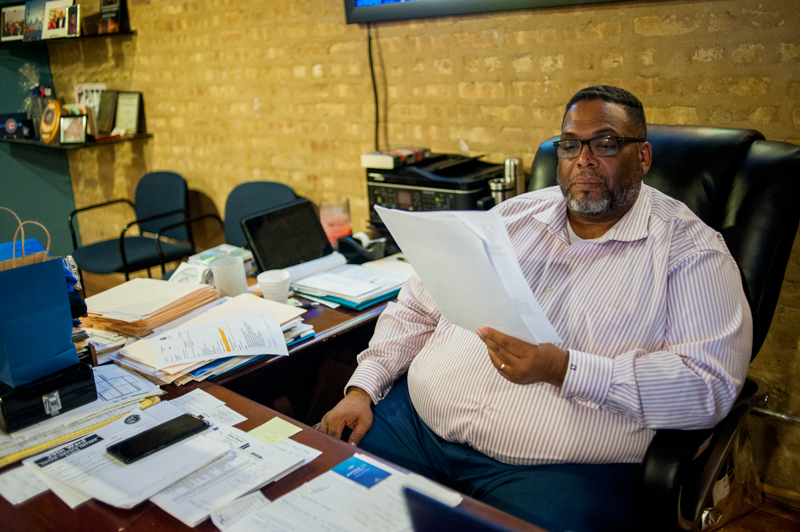 In 2013, Sutton was arrested in Wilmington, North Carolina and charged with illegal gambling at a business there — also called Spin City.

Sutton also did not return calls.

‘They’re in a gray area’

Nothing came of it, Sposato said.

“They sent [the police vice squad] in there and vice says, ‘Yes, they’re paying out and they’re definitely doing something wrong,’ but nobody did anything,” he said last month.

But after WBEZ asked the city about Sposato’s complaint, officials said they also ticketed Mackey’s for not disclosing that it has sweepstakes machines. Owner Salvi Porretta did not return messages left at Mackey’s, at 3715 N. Harlem Ave. 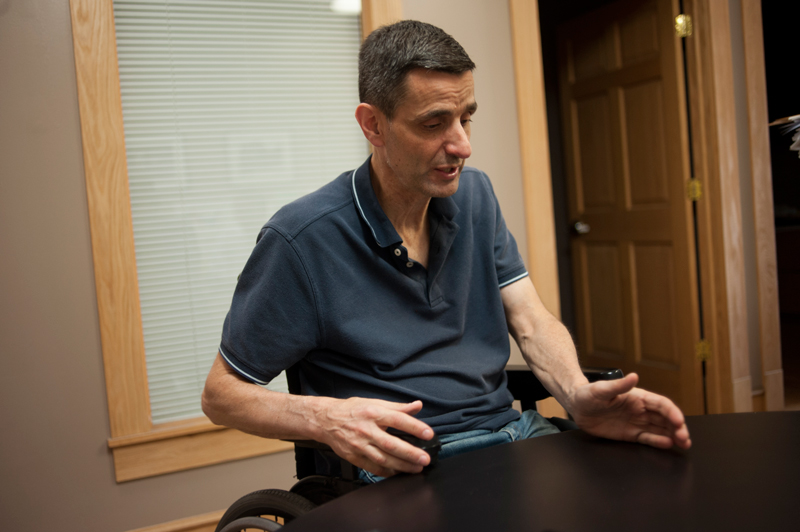 Several sweepstakes machine operators contacted by WBEZ did not return calls. But Jeffrey Steinback, a lawyer who said he has represented some of them, said the machines do not break any law.

Steinback said sweepstakes machines are no different than a sweepstakes game conducted by McDonald’s or Publishers Clearing House. Because users have the option to play the machines without wagering, he said no law is broken — even when users do play with cash.

Another difference between sweepstakes and video poker machines is that sweepstakes machines issue the winners coupons, which can be exchanged for prizes instead of cash. Steinback said 38 percent of winners chose prizes such as discounted goods instead of a cash payout.

“It isn’t gambling because you can enter for free,” he said, declining to identify his clients in the industry.

Some of the machines spotted by WBEZ, including the three at Bubbleland, have stickers affixed to the sides that are marked “LEGAL ANALYSIS.” The text of the stickers says, in small print, that the machines are not gambling devices and can be played for free.

So far, state gambling regulators here haven’t been able to do anything about sweepstakes machines, despite saying they’re illegal.

The Gaming Board seized such machines from a business in the city of Morris, about 60 miles southwest of Chicago. But last year, a state appellate court ruled that the Gaming Board did not go through the proper process for doing so.

The foggy legal status has led to competing legislation for and against allowing sweepstakes machines in Springfield. A state House panel in May narrowly rejected a bill that would have clearly legalized them.

Amid this uncertainty, a company called Jackpot Gaming 777 placed an ad for sweepstakes machines in a restaurant trade publication. The ad said the machines exploit a “loophole” in state law and are “City of Chicago approved.”

“The ad is not only misleading — it’s deceptive,” said Rosa Escareno, the city’s commissioner of Business Affairs and Consumer Protection. “Essentially, [sweepstakes] is gambling. These are individuals that are shady actors. I would caution any good business in Chicago to be wary of ads like this one that promote how to get around the system essentially.”

‘You don’t know who’s behind them’

Emanuel’s City Council floor leader, 40th Ward Ald. Patrick O’Connor, is the chief sponsor of the measure to ban the machines in Chicago. More than 30 aldermen have signed on as co-sponsors.

An Emanuel administration spokeswoman said officials are reviewing the measure but have not yet taken a position on it.

Illinois House Republican Leader Jim Durkin of Western Springs sponsored the failed attempt in Springfield to ban sweepstakes machines from the entire state. Other states, including California, have approved such restrictions against them.

Durkin said he played a sweepstakes machine during a fact-finding mission to a bar earlier this summer. He rejects legal arguments that the machines don’t represent gambling.

“They’re full of B.S.,” he said. “It is gaming. I saw it. I witnessed it. And I won. I won $15 at a sweepstakes machine, which was given back to me from a bartender when I gave him the slip, my gaming receipt. So don’t tell me this is not gaming. I saw it firsthand.”

Citing the state’s longtime notoriety for organized crime involvement in illegal gambling, Durkin worries that the lack of oversight will breed corruption.

“These types of operations, you don’t know who’s behind them,” he said.

At Smitty’s Tap on Main Street in Streator, there are sweepstakes machines — despite the bar being denied a video poker license. 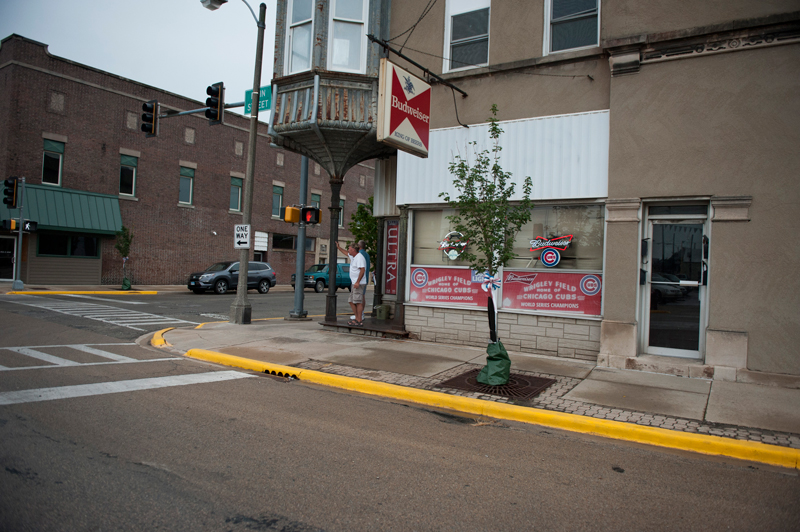 State records obtained by WBEZ lay out the Gaming Board’s case for denying a license to Smitty’s Tap and its owner Lee Yanello. In a letter to Yanello in 2015, officials said he has a criminal history and failed a background check.

The documents show that:

Yanello was not at Smitty’s when a reporter went there recently and did not return messages.

Across Main Street from Smitty’s, a similar story has played out at The 50 Yard Line bar.

And like Smitty’s, that bar has sweepstakes machines now.