From defiant lawsuits to reversing policies, U.S. cities and counties are zeroing in on their immigration rules to avoid losing millions in public safety dollars that the White House has threatened to withhold amid a high-stakes clash over sanctuary policies.

President Donald Trump has made it a top priority to revoke federal dollars from so-called sanctuary cities, broadly defined as places that limit cooperation with federal immigration authorities. Trump says he believes such cities and counties are providing a haven for criminal activity.

Amid an executive order and almost weekly threats by the administration, cities and counties are fighting back.

At least six locales are suing, with Chicago becoming the latest city to join the legal fray last week. Leaders in Baltimore and the Las Vegas area have been trying to prove to the federal government that they don't have sanctuary policies so they can qualify for public safety help. Some local governments have sought to comply with the administration's edicts.

The result for cities and counties: growing confusion, budgeting headaches, worries about increased crime and more tension with immigrant residents. And experts expect more lawsuits and turmoil at the local level.

"They're not getting clarity," said Yucel Ors, a program director for public safety at the National League of Cities. "When you're planning budgets or there's an expectation for grants and applications, it becomes very difficult to properly judge what your resource is going to be, especially with law enforcement."

Sanctuary policies have existed for decades. There's no single definition, but generally local officials enact policies friendly to people living in the U.S. without legal permission, including limiting cooperation with agents in local jails and prohibiting police from asking about immigration status during traffic stops.

The nation's roughly 200 sanctuary cities and counties are now a focal point in the immigration debate with Trump in the White House.

Some locales, including Florida's Miami-Dade County, have already changed their immigration policies to comply. Others are considering the same.

But the more common tactic among sanctuary cities has been to push back. Lawsuits over constitutional concerns cropped up in California's Santa Clara County, San Francisco, Seattle and two Boston-area cities, with the California lawsuits prompting a temporary injunction.

In its federal lawsuit last week, Chicago targeted new conditions for a public safety grant calling for close cooperation with federal authorities, including access to jails. Chicago, a sanctuary city since the 1980s, calls the changes unconstitutional.

"The Trump Justice Department ... is asking the city of Chicago to choose between our core values as a welcoming city and our fundamental principles of community policing," Emanuel said at a recent news conference. "It is a false choice and a wrong choice. Chicago will not let our police officers become political pawns in a debate." 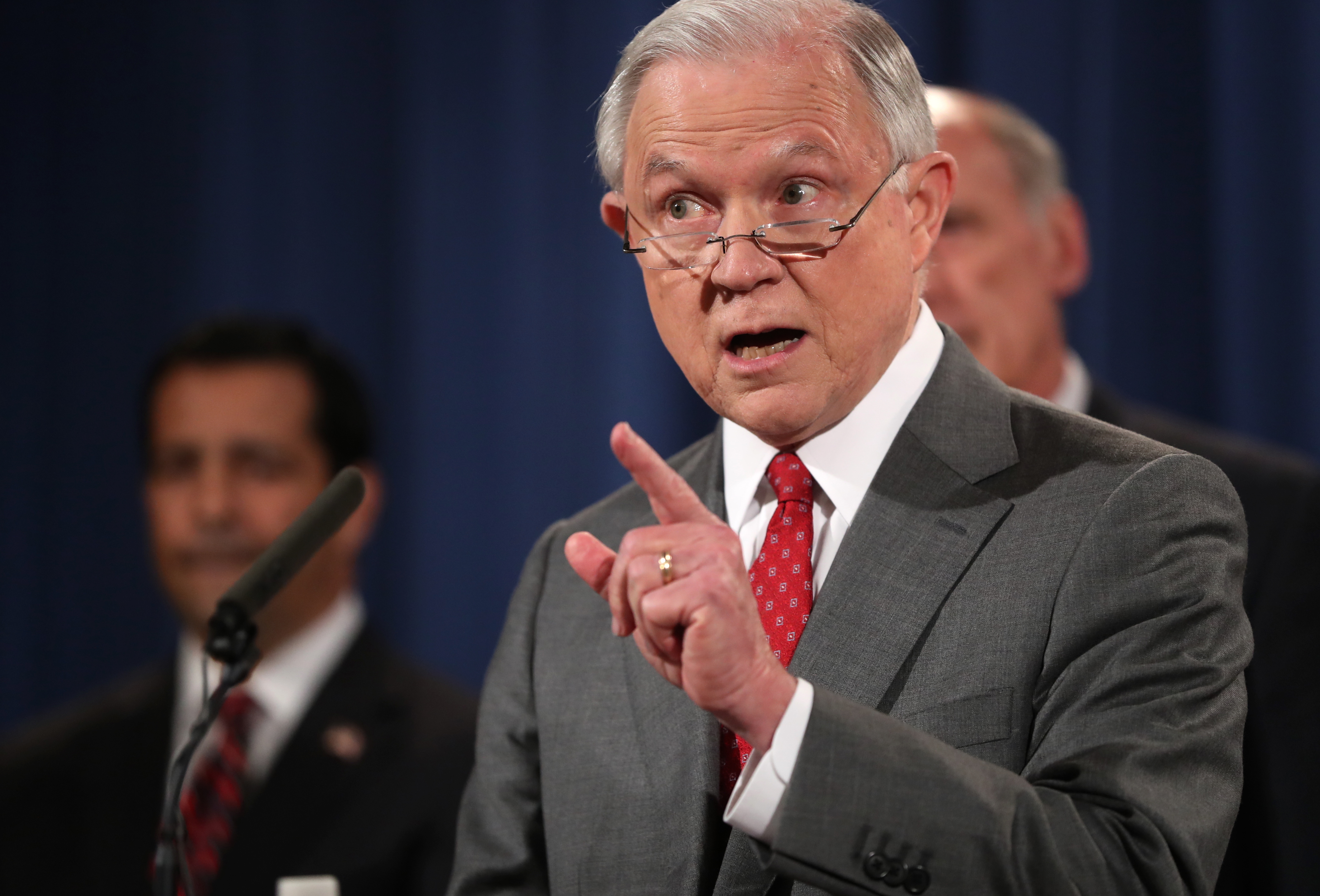 Nationally, the federal government awarded about $264 million to more than 1,000 different entities last year through the Edward Byrne Memorial Justice Assistance Grant program, also known as Byrne JAG. Chicago's share was about $2.3 million, including for police cars. The program is named after a New York City officer killed in 1988 while protecting an immigrant witness who'd agreed to testify against drug dealers.

The fight has led to chaos in cities and counties that say they're being inaccurately branded by the administration.

Roughly $1 million in Byrne JAG money was in limbo for Nevada's Clark County until this month. The county submitted a 108-page memo covering the role of Las Vegas police to prove it should continue receive funds it uses for things like juvenile services.

Baltimore city officials were baffled when they received an August letter saying they wouldn't qualify for a different federal anti-crime program. The city hasn't formally declared itself a sanctuary city, and city jails are run by the state of Maryland, not the city. Baltimore faces a Friday deadline to prove its case.

In New Mexico, Albuquerque received a similar warning. Albuquerque eliminated a sanctuary policy years ago, but city and county officials approved largely symbolic "immigrant friendly" measures this year. The federal warning appeared to target immigrant jail policies in Bernalillo County, where Albuquerque is located. County commissioners debated a plan allowing more cooperation between local and federal immigration authorities, but the Democrat-majority board defeated it last week at a meeting well-attended by opponents.

Two California cities, Stockton and San Bernardino, were also called out after expressing interest in the Justice Department's Public Safety Partnership, which enlists federal agents and technology to find crime solutions. They were told they wouldn't qualify unless they give federal immigration authorities access to jails and notify agents before releasing inmates wanted on immigration violations.

Miami-Dade County reversed its policy earlier this year, saying the county would honor "detainers," or holding people for extra time to be arrested by immigration authorities. Local officials defended the change, saying they wanted to keep receiving federal money for body cameras and community policing. However, the reversal is now the subject of an American Civil Liberties Union lawsuit.

In New Mexico, concerns linger about possible lost funding opportunities for Albuquerque, which ranks first nationwide for the number of cars stolen daily per capita. Commissioner Wayne Johnson, a Republican, said he introduced the plan to increase cooperation with immigration authorities in response to Trump's warning.

"We have a broken criminal justice system," said Johnson, who's running for mayor. "We need to have every tool at our disposal."