﻿Stepping into a longstanding men’s homeless shelter in Chicago’s Uptown neighborhood, it might be hard to tell that the place was shuttered last year just days before Christmas.

The vibe inside the shelter during a recent visit was dramatically different than a year ago, when it faced a disastrous shortfall in private donations that disqualified the shelter from receiving more than  $400,000 in city grants. The shelter was forced to lay off its nine employees, move its clients to other shelters or apartments, sell all of its furniture and appliances, and shut its doors for good.

But the shelter received a last-minute lifeline — a $400,000 gift from the Reva and David Logan Foundation that will be spread out over three years. The donation not only helped the shelter immediately secure matching grants from the city to reopen, but it also paid for upgrades to the facility. Most significantly, it also energized the staff and clients with a newfound sense of optimism that is motivating more homeless men to become self-sufficient, Johnson said. 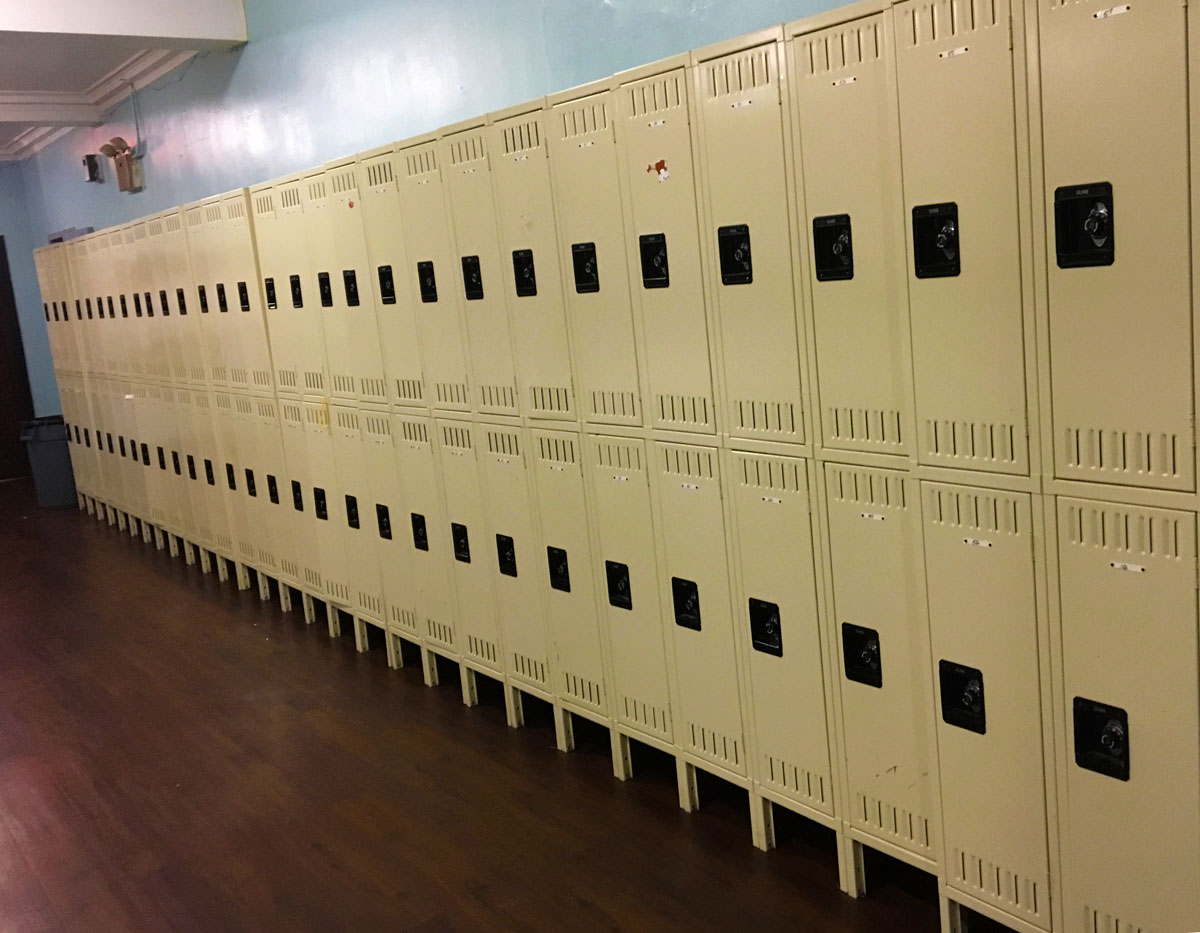 Small renovations have helped to make the shelter a cozier space. In a large main room, where clients receive three meals and spend time during the day, the walls have a fresh coat of sky blue paint. A warm, wood laminate surface now covers the worn concrete floor where the men arrange thin cots at night for sleeping. And a brand new bank of lockers lines one wall.

Richard Ducatenzeiler, executive director of North Side Housing and Supportive Services, said that many of the shelter’s old lockers were broken or would not lock.

“Each of these locks now has their own combination,” Ducatenzeiler said. “People are able to keep their medication [and] not have to worry about it being lost or stolen.” 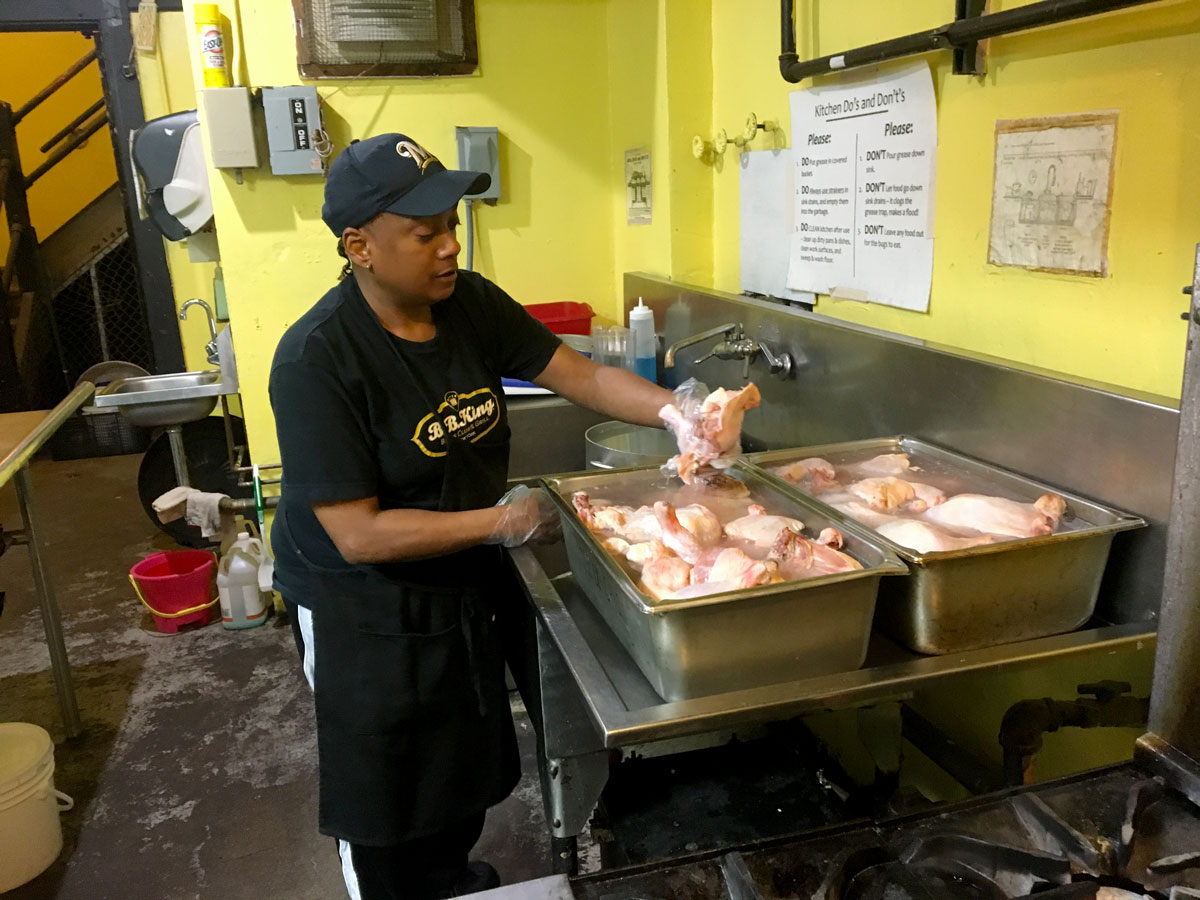 The kitchen, too, has been repainted and supplied with brand-new refrigerators and a freezer. But for Johnson, the most exciting addition has been Maxine Hall, the shelter’s first and only full-time kitchen manager.

“It’s been such a pleasure cooking for clients here,” Hall said.

One Wednesday morning, she prepared sandwiches and salad, the lunch for the shelter’s clients. In a nearby tub by the sink, dozens of raw chickens were being prepared for dinner. They’d be baked and served with cabbage and cornbread. 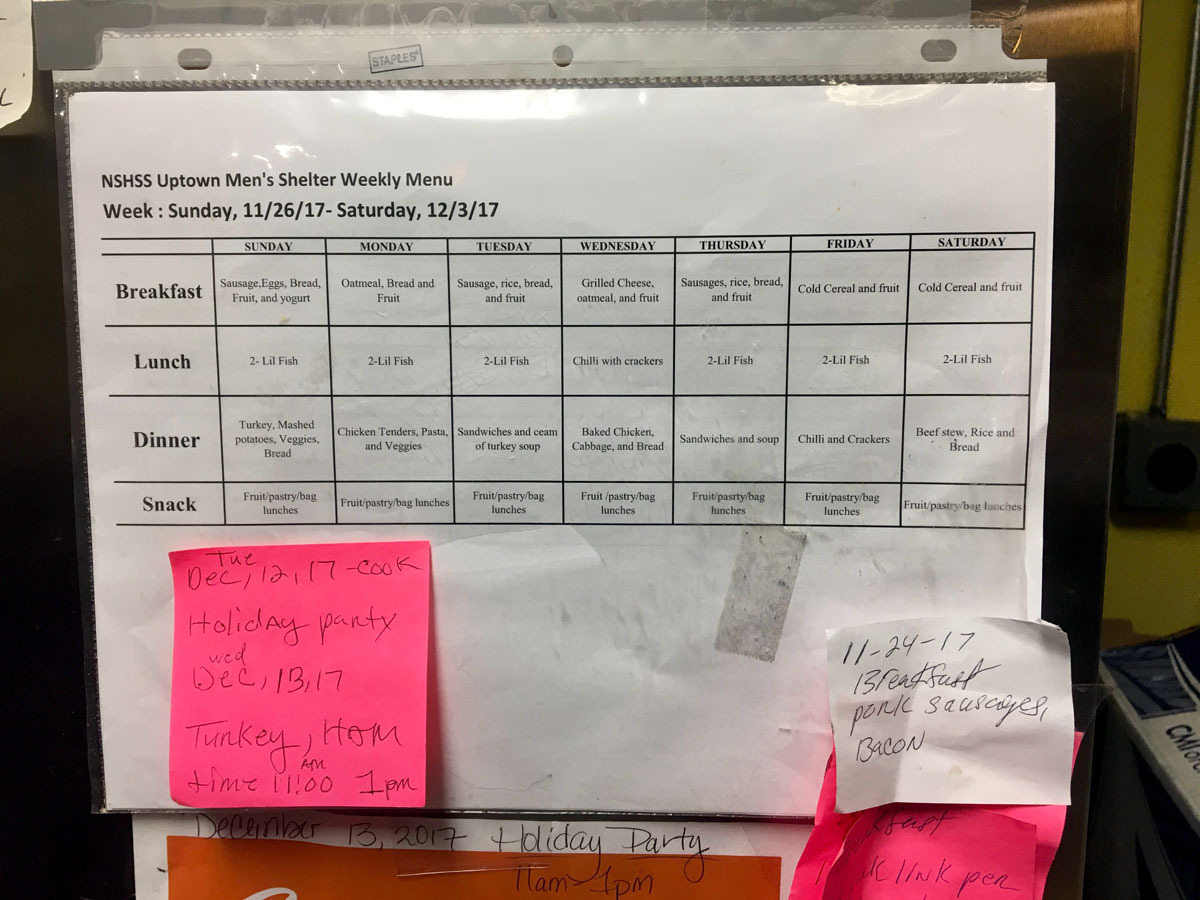 “Just on a small level, being able to provide a nutritional meal is something that we didn’t see before, and that we wanted and now is here,” said Johnson.

Before the shelter had the resources to hire a kitchen manager, clients were expected to prepare meals alongside the shelter’s staff. Johnson said this made it more challenging to ensure that meals were nutritious, varied, and that food was prepared and served in accordance with Chicago health codes. Hall, she said, has been a game changer on all those fronts.

“And the residents always brag about the meals that they’re receiving now,” Johnson chuckled. “The word on the streets [is] North Side Housing gets good meals. So residents [are] always trying to get in here.”

It might seem like all of these new upgrades would make clients want to stay as long as possible at the shelter, but Johnson said that’s not the case. If anything, the changes have inspired them to get out, she said.

Johnson said in the past, “there were a lot of residents who were comfortable and kind of taking their time with moving forward.”

Now, many clients are coming into the program, getting help to stabilize their health and finances, and moving into their own apartments more quickly than before, Johnson said, adding that two new case managers, whom she hired last year, helped transform the attitudes of clients.

“We have case managers who are very resourceful, who are very supportive. And so it motivates participants to want to move out into housing,” she said. “Especially knowing that even after they leave the program, that the case managers will follow them for up to six months.” 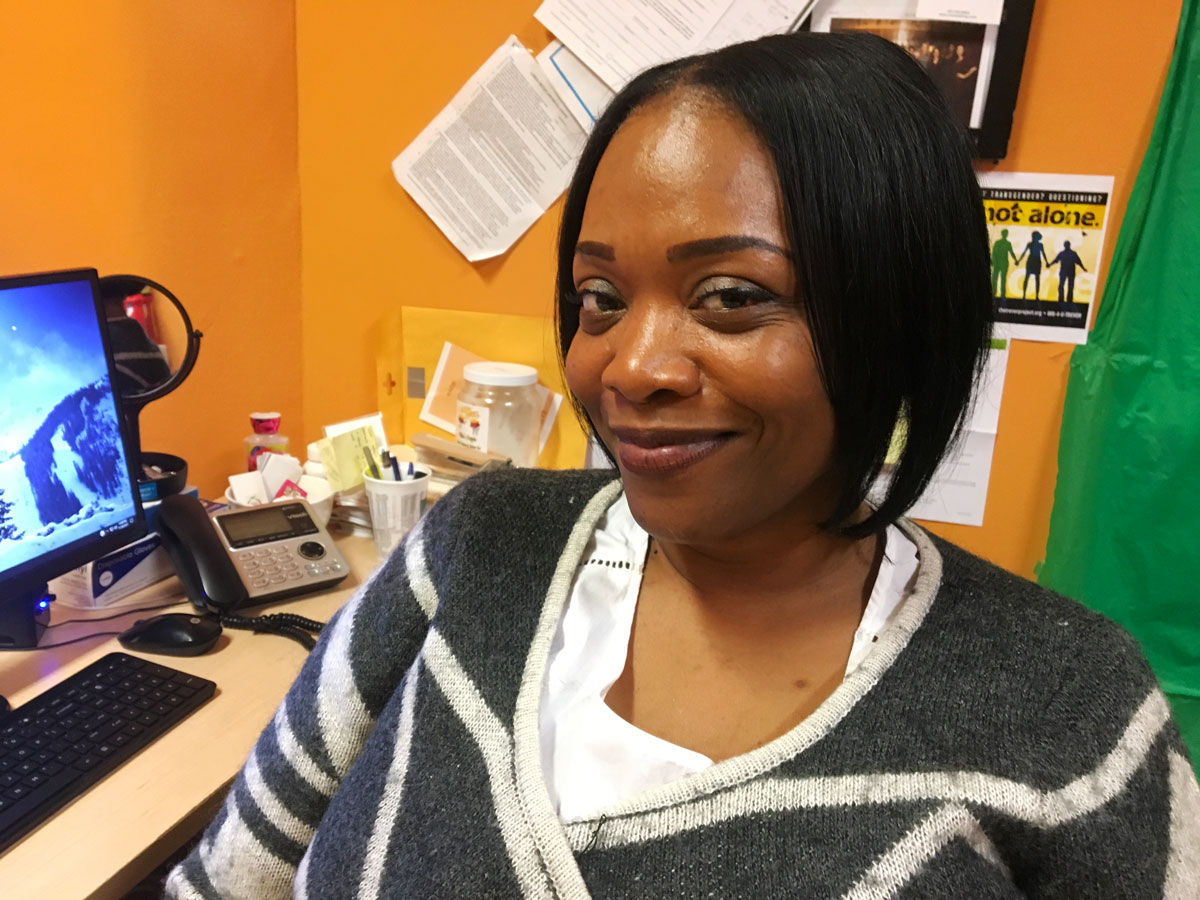 Before Fineface Koko found his way to the shelter, he said he’d spent nearly a year sleeping in his car and occasionally in motels. But as winter approached, the 52-year old former driver realized he needed another option. He arrived at the men’s shelter in mid-October.

Despite the comforts, Koko is quick to share his action plan for getting out. He said he intends to be out of the shelter, self-sufficient, and living in his own place within the next three months.

“What I want to do, now the economy is stabilized, is… go back to driving a truck,” he said. “I want to drive a truck for five years, then I want to retire.” 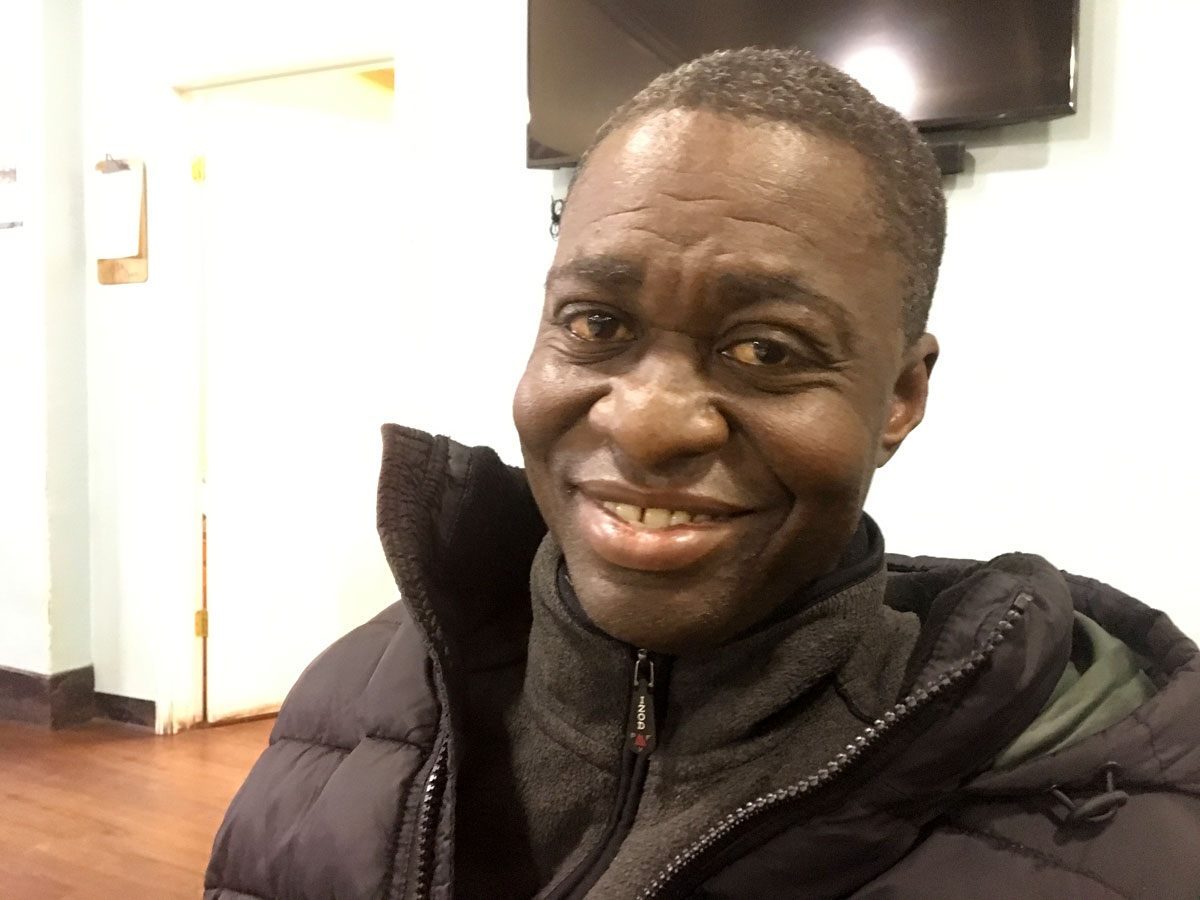 Other shelter clients are eager to share their plans as well. Simmie Carlton, a 69-year old package handler for UPS, said the shelter is helping him while he is on disability leave. Case managers arranged for him to see a primary care physician and a podiatrist about the foot problem that forced him to take a leave. He said in two weeks, he plans to be back at work, save money, move to his own place, and resume some of his favorite physical activities.

“Right now, I’m on the road to recovery, to better health,” Carlton said. “And I think I’ll be able to do all those three things: ride, swim, and run.”