The state of Michigan has reached an agreement with Canadian oil company Enbridge over a controversial pair of 64-year-old pipelines that pass between Lake Michigan and Lake Huron at the Straits of Mackinac, according to a recent report by Dan Egan for the Milwaukee Journal Sentinel.

In the agreement, which was signed by Michigan Gov. Rick Snyder and representatives from Enbridge on Monday, the oil company announced a plan to study the possibility of building a new pipeline that would be buried beneath the lake bed in a tunnel. The existing pipelines currently rest underwater on the bottom of the Straits of Mackinac.

In an interview on WBEZ’s Worldview, Egan said the plan to tunnel a new pipeline under the waterway is not sitting well with conservation groups.

“They’re really concerned that this oil even flows under or through the Great Lakes because the majority of it doesn’t stay in Michigan or the U.S.,” Egan said, adding that most of the oil goes back into Canada at Sarnia, Ontario, and eventually on to the Canadian east coast, making Michigan “a shortcut.”

“They’re being asked to bear a lot of risk,” Egan said.

Monday’s agreement also outlines policies for monitoring the existing Line 5 pipeline, plans to shut it down during periods of inclement weather, as well as promises of increased transparency and communication between Enbridge and the state.

State lawmakers and activists have criticized Enbridge for saying the existing underwater pipeline was in good shape shortly before state officials learned of several areas of missing protective coating, according to the Detroit Free Press. Additionally, a different Enbridge pipeline leaked hundreds of thousands of gallons of crude oil into the Kalamazoo River in 2010.

The agreement comes on the heels of another report — commissioned by the state of Michigan and made public last week — that outlined alternatives to the pipeline that included a proposed route near Chicago.

“Michigan has the biggest card to play because Michigan owns the lake bottom across which these two pipes run,” Egan added. “Michigan really holds the ultimate lever here.”

Egan, who is also also a senior fellow in water policy at the School of Freshwater Sciences at the University of Wisconsin-Milwaukee, spoke to Worldview host Jerome McDonnell about the details of the agreement and the conditions that make pipeline planning such a contentious subject. Below are highlights from the conversation.

Dan Egan: That’s a stretch of water like nothing else in the Great Lakes. It connects Lakes Michigan and Huron. Eight thousand years ago, there was a river connecting Lake Michigan to Lake Huron up there. And that channel still exists and water still flows through it, but depending on weather conditions, it can also flow backwards — instead of toward the east it can flow westward into Lake Michigan — so if you get a leak there, there’s a lot of coastline, a lot of prime vacationland coastline exposed to a spill.

Everything humans build eventually breaks. Everything. A bowling ball will break. So the question is: Are these lines going to be fixed or moved before they break or after they break? 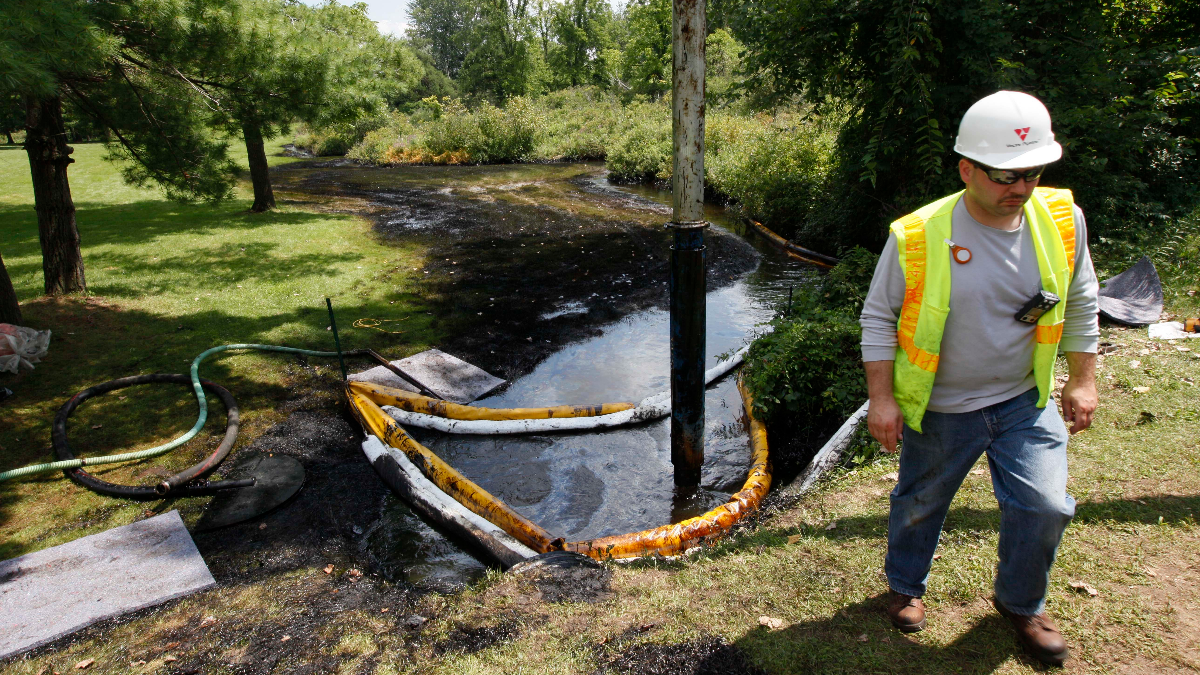 What Michigan gains from the Line 5 pipeline

Egan: Obviously there’s some employees. The pipeline runs hundreds of miles through Michigan. It runs basically the length of the Upper Peninsula and then down the Lower Peninsula quite a way. And that requires maintenance and staffing and taxes.

I don’t have the numbers in front of me, but critics and politicians on both sides of the aisle point out that the economic benefit does not match the risk.

On support for the pipeline

Egan: There are a lot of people in Michigan who support the pipeline because they acknowledge the fact that everybody in these rooms where they have public hearings got there in a car using the oil everybody needs. The question is how much do we need and where is this Line 5 oil exactly going.

When Enbridge talks about trust, they’ve never been really clear about its ultimate destination. They say about a third of it stays in refineries in the Detroit area, but people who have studied oil flows think that it could be far less than that. When you try to get an Enbridge spokesman like Ryan Duffy, who you just had on the line to tell you where the oil goes, they say that that’s their own business.

On what happens next

Egan: I don’t think the public in Michigan is going to tolerate these pipes being on the bottom of the Straits of Mackinac, exposed as they are today. From what I’m hearing — and this agreement was a surprise to a lot of people — most all the conservation groups are opposed to the idea of even a tunnel. They really do see it as Enbridge’s problem to solve and it’s not Michigan’s risk to bear.

So they have some kind of date, August 15 this summer, where they’re going to agree to go forward with a tunnel or perhaps in some other direction. But I think that there’s going to be a lot of debate and discussion between now and then.

This interview has been edited for brevity and clarity and was adapted for the web by producer Justin Bull. Click the “play” button to listen to the entire conversation.