100 Years Ago, This West Town Private School Building Was A Center Of Social Reform

At the corner of Grand and Morgan in West Town stands a connected pair of five-story buildings — one a commanding red-brick and the other a contemporary brick, metal and glass. Together, their histories illustrate how the surrounding neighborhood has changed over the last century.

The private Bennett Day School moved into the older building in 2016 and the newer building is an expansion that’s set to open this fall. But before it was a private school with a new wing, the building offered gathering spaces and educational services to families in need.

“What’s That Building?” fan Cheryl Wisniewski asked us about the contrasting pair of buildings because she already knew some of the history. She currently works for Chicago Commons, which today is based in Bronzeville and offers educational and support services to families and seniors living in poverty.

We visited the buildings with Wisniewski to learn more about the history and future as a school.

Chicago Commons was founded in May 1894 as the live-in project of Graham Taylor, a professor of “applied Christianity” at the University of Chicago. Taylor wrote in 1897 that he and his group were there, “because they [believed] in the sharing of life; that most of the mischief of the modern social situation arises from the distant separation of classes.”

The project moved in at Grand and Morgan in 1901, which was then a neighborhood of working-class Scandinavian, Irish, and German immigrants. A 1898 periodical described the Commons as an upstanding alternative for men who were spending time in the neighborhood’s “163 saloons and many more worse places of resort” and a space where young people could be “brought into continuous contact with some friendly, inspiring, uplifting personality.”

The building was designed by the architects Pond & Pond, brothers who also designed Hull House and university buildings and libraries throughout the Midwest. It had a residential wing, an auditorium, classrooms, club rooms and other spaces, all intended to bring in people from the neighborhood. 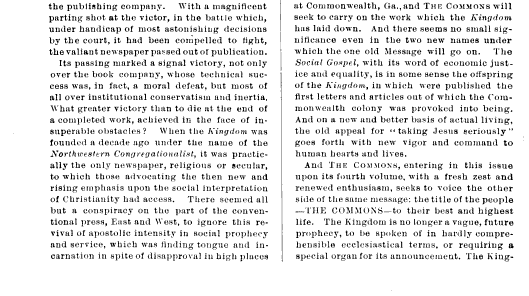 ‘The basement floor plan of the Chicago Commons, as outlined in a 1898 periodical dedicated to the Commons. Google Books

Taylor’s daughter, Lea, took over as head of Chicago Commons after Taylor’s death in 1938. She notably welcomed new African American neighbors when others in the white ethnic neighborhood wanted to ban black people from using the Commons’ services.

Chicago Commons moved out of the building in the mid-1950s as the construction of the Kennedy Expressway displaced many neighborhood’s residents.

The Commons outside of West Town

The legacy of those working in and around the Commons is visible in other parts of Chicago as well.

Graham Taylor founded a school of social work that grew into the University of Chicago’s School of Social Service Administration. His son, Graham Taylor Jr., was part of the Illinois Governor’s commission that studied the causes of the July 1919 race riots in Chicago and produced the seminal report, The Negro In Chicago. Bertha Hofer Hegner, who ran the Chicago Commons kindergarten from 1895 to 1904, founded a teacher’s college that eventually became Columbia College, where she was president from 1929 to 1936.

A school with a vision of collaborative learning

In 2014, Pearsall’s firm began rehabbing the 35,000-square-foot building for his future tenant, the Bennett Day School, which was then in the Fulton Market area. The school uses an alternative learning approach that co-founder Cameron Smith described as “students and teachers learning new things together.” It includes spaces like a “collaboratory,” where students hand-build projects.

The new 15,000-square-foot wing will allow the school to grow into a full Pre-K through 12 program. Tuition at Bennett Day School is $20,000 per year for pre-kindergarten, and about $29,000 per year for all other grades, though the school does offer grants.

For now, the two buildings connect on every level so the interiors flow together. The extensively rehabbed old section, Smith said, is essentially “a new building inside an old building.”