On Sunday, the tiny Albanian-born woman known as Mother Teresa becomes a saint of the Catholic Church. Mother Teresa, who died in 1997, was known for her work among the poor and sick in Calcutta, India. But her mission expanded globally through a religious order she founded, called Missionaries of Charity. In Chicago, a small group of nuns have quietly been carrying on her work, in areas that have been riven by violence, drugs and the challenges of poverty.

The connection began 33 years ago, when a Chicago priest wrote to Mother Teresa, asking her to send some of her nuns to one of the poorest and most violent parts of Chicago. Her response came by mail: “God bless you, Father. As soon as I can, I will send you four nuns.” In 1983, they arrived, setting up in a spare brick building behind St. Malachy church. Mother Teresa herself visited the building to mark its opening.

“She was just a different person, and a lot of people respected it,” remembered Ricky Austin, who met her during that trip and now volunteers at the soup kitchen the sisters continue to run from that building. Austin recalled that, at the time, the building was sandwiched between high rises of the Henry Horner Homes public housing complex on the near West Side. The complex had become notorious as a hotbed of violence and hopelessness. Mother Teresa’s visit, said Austin, changed things.

“They put their guns down,” Austin said, intimating that he, too, left a violent life. “Maybe that’s what changed my life. By me meeting her.”

“The condition there was really bad at that time,” recalled Sister Julian Paul, a diminutive nun whose first placement was in Chicago after she completed her training in Calcutta. “Every day at three o’clock they (had) shootings next door. And the bullets, we picked up bullets from our own house.” Sister Julian Paul said the bullets would sometimes pierce the windows of the building where the nuns slept.

This violence was certainly a change from Calcutta, where Sister Julian Paul had lived with other nuns and with Mother Teresa herself. There, she helped carry on the mission of caring for orphans, the sick and the needy. Still, she said she and the other sisters never hesitated to go into the Chicago high-rises every day to continue that work, evangelizing, feeding the hungry and helping the sick. 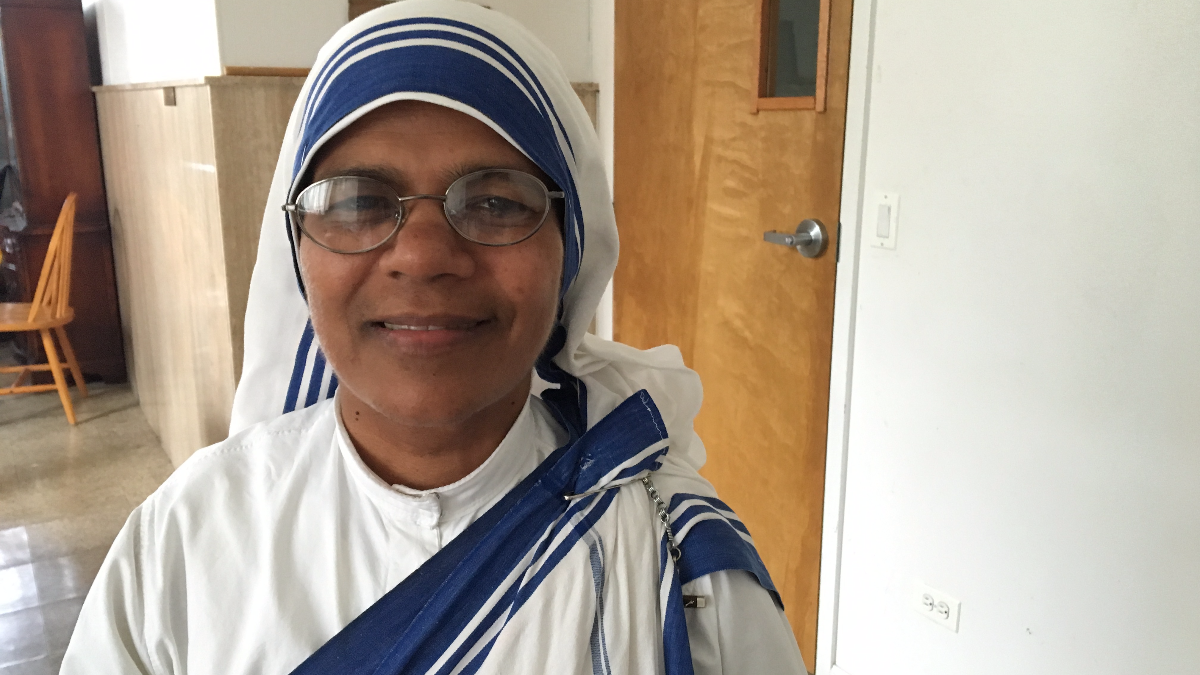 Sister Julian Paul trained as a nun in Calcutta, where she knew Mother Teresa. She says Mother Teresa’s elevation to sainthood affirms that the work that she and the sisters do is “authentic.”

“We were not afraid,” she said. “We’d go out, and when we’d go out to see the people, they say, ‘Let the sisters pass.’ They stopped shooting for us to pass.”

Over time, the high rises were torn down, and the sisters moved their residence to a new location three miles away, near Little Village on the West Side. There, they also run a shelter for single, pregnant women. The soup kitchen continues six days a week in its original location. In 1986, Missionaries of Charity also opened a second location in Pilsen, at St. Procopius church. It’s home to a small number of contemplative nuns.

Normally reticent around the media, the sisters agreed to be interviewed because Sunday's canonization of Mother Teresa is a momentous occasion for them. Very protective of Mother Teresa’s legacy, they expressed concern that their words would be distorted, and are aware of controversies surrounding the famous nun. Critics claim that Mother Teresa administered substandard care to the poor; they’ve condemned her strident stand against abortion and contraception; and, they’ve questioned where millions of dollars of donations have gone.

But for the sisters, Mother Teresa’s canonization is vindication of her legacy and of their choice to carry on her work. Sister Julian Paul and others told me they’ve long believed they’re continuing the work of a saint. Finally, they say, the Catholic Church is affirming that.

“It’s time to rejoice that what we live is authentic, which is proof that she is a saint,” explained Sister Julian Paul, “so we’re living an authentic life.”

Sister Julian Paul said she knew she was called to join the order when she had a dream of Mother Teresa. But having grown up in Southern India, in a family of doctors and nurses, she did it over her family’s objections. “They wanted me to get married,” she said. The people that she and the other sisters seek out often come to them with the heaviest of burdens, including drug use, criminal histories, abuse, homelessness and mental illness. But Sister Julian Paul says she hasn’t had a single day of regret since she took her vows. Indeed, they move quietly about their residence, wearing their traditional cotton white saris with a blue trim, with an air of purpose and joy. Sister Julian Paul says this is something she learned from Mother Teresa herself, back during her training days in Calcutta.

“She [made] you laugh. She said if you cannot smile, go home,” Sister Julian Paul recalled, laughing. “She used to tell us, ‘If you cannot smile, cannot laugh, go home. Because that’s not your vocation. We don’t want sour saints.’”

The sisters will celebrate Mother Teresa’s canonization at St. John Cantius Church in West Town on Sunday at 3pm.