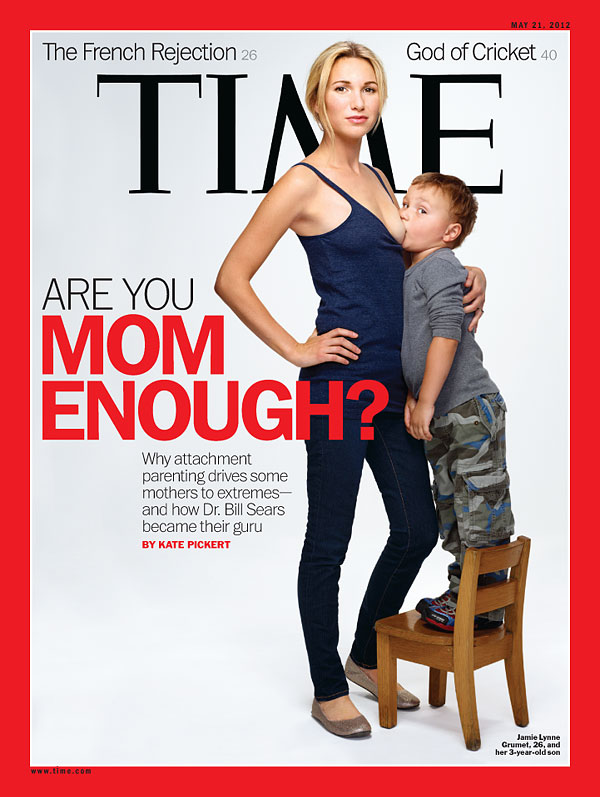 We probably don't even have to introduce this particular magazine cover: Time Magazine really knocked it out of Controversy Park with this one.

Comedian Jared Logan wasn't alone in finding this scandel ripe for the joke-picking, but he may have taken the joke further than others. "I breastfed until I was 11 and, as you can see, I’m a completely normal, well-adjusted person," he said at The Paper Machete.

"My mother died of a severe calcium deficiency," he continued. "It was very mysterious. The doctors said it was as if every bit of calcium in her body had somehow been stripped away." Read an excerpt of his biting commentary below or listen above:

On May 10th, 2012, Time Magazine published an issue which featured on its cover Jamie Lynn Grumet, age 26, and her son Aram, age 4. In the photo, Aram has Jamie Lynn’s breast inside of his mouth and he is sucking on it.

The cover has provoked a lot of controversy. There are a lot small-minded people out there who believe it is wrong to breastfeed a child that can talk and use tools. Those people need to quit drinking from the teat of hypocrisy. The cover has finally given me the courage to reveal to the world that I was breastfed by my mother, Catherine Logan, until I was 11 years old.

Like Jamie Lynn Grumet’s parents, my mother was also a healthcare professional. My mom was a crystal healer and part-time Tarot card reader, so I guess you could say she cared for the entire body; physical, mental and magical. She was a success in her field and I can proudly say that not one of her patients was ever possessed by a demon or turned into a werewolf. My mother decided to try long-term first decade breastfeeding after it was recommended to her by a witch named Hegetha who lived in a bus.