Wrigley Field had a series sweep by the White Sox, a Cubs retirement and a touch of NATO this past weekend.

Are the Cubs that bad, or are the Sox that good? It is hard to decide the answer until more of the baseball schedule is played, but we can look at this past weekend’s series and make a few determinations. 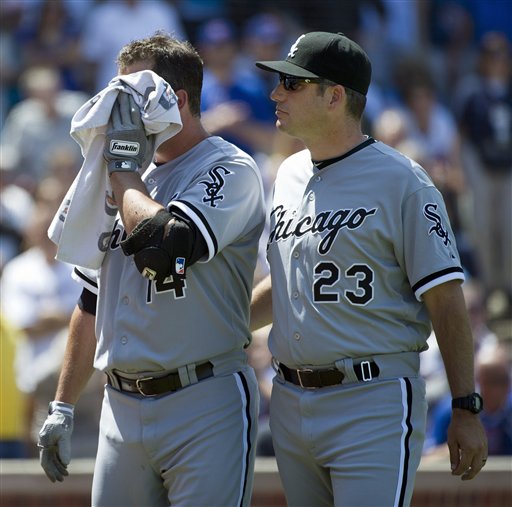 The White Sox starting pitching was definitely effective: Phil Humber (no decision in the Sox 3-2 win) John Danks (no runs in 6 1/3 innings, earning the 7-4 victory), and Jake Peavy (no runs in 6 1/3 innings and the bullpen helped with the 6-0 win). The Sox powered eight home runs, including two by Adam Dunn and Gordon Beckham. Dayan Vicedo, A.J. Pierzynski, Tyler Flowers and Paul Konerko also had homers. Konerko only played in game one; he was knocked out (literally) by a Jeff Samardzija pitch that caught the Sox first baseman’s eye.

Up close, Konerko’s injury looked worse than he said it felt. Fortunately, there was no serious damage and Konerko hopes to return to action on Tuesday. His absence gave Vicedo a chance to see some action, since Dunn, the Sox’s usual designated hitter, was playing left field to keep his bat in the lineup while playing in a National League park.

Now mired in a six-game losing streak, the Cubs are trying to find a way to get some offense. They only tallied two runs in game 1, and on Saturday they were down 7 to 0 in the bottom of the 9th, where the Cubs got 2-run homers by Joe Mather and Alfonso Soriano, in the finale with the wind blowing out – not one run on the board for the North Siders.

Before Sunday’s game, Cubs manager Dale Sveum said the team will discuss bringing up top prospect Anthony Rizzo from Triple-A. That may force the team to move Bryan LaHair to the outfield. The Cubs first baseman told reporters after the series finale that he has no problem with any move. Sveum is also considering making some changes at the top of his line-up. It has to be rough for the Cubs starting pitching; they have kept their teams in games without good results. There is a feeling this team is sinking rather quickly with less than a quarter of the season completed. 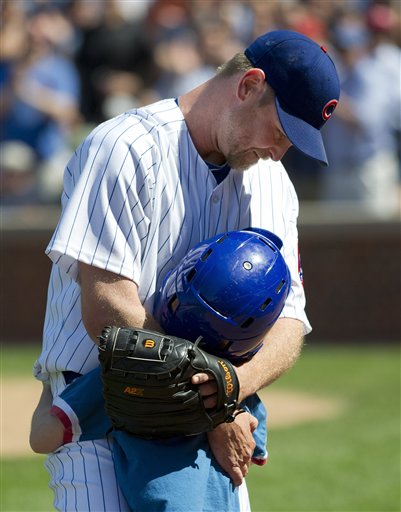 Additionally, the Cubs will be moving on without reliever Kerry Wood after this weekend. It’s almost odd to say, but Wood’s retirement was actually a nice moment for the Cubs. Many players don’t have the opportunity to decide when they exit. Many decisions are made after the season ends; with a sore shoulder, Wood was unable to pitch effectively. The right hander had some wonderful accomplishments, from his 20 strike-outs of the Astros in 1998 to winning the deciding game of the 2003 playoff series versus Atlanta. Yes, he was on the DL 16 times during his career and had “Tommy John” surgery resulting in him missing a season. He came back again and again despite all those ailments, but this time, he just couldn’t do it. He made his final appearance on Friday, faced one batter, Dayan Vicedo, and struck him out on three pitches. The cheers from both Cubs and White Sox fans were heart-felt. But the very best and most touching moment came as “Woody” reached the dugout where his young son, Justin, met him. It wasn’t planned, it just happened and it was perfect.

Saturday afternoon, hours before the game, the Cubs held a ceremony on the field to honor Kerry Wood. His family, teammates, team officials and the media were present. Cubs owner Laura Ricketts presented Wood with an enlarged photo of the touching moment Kerry shared with his son from the previous day on the field. Ms. Ricketts also gave him the flag that flew at Wrigley commemorating his 20 strike-out game. Wood thanked his supporters and said he would always be a Cub. His immediate plans are unclear; he did say he is inclined to look at a consulting role, similar to the one former Cub Greg Maddux held in recent years. 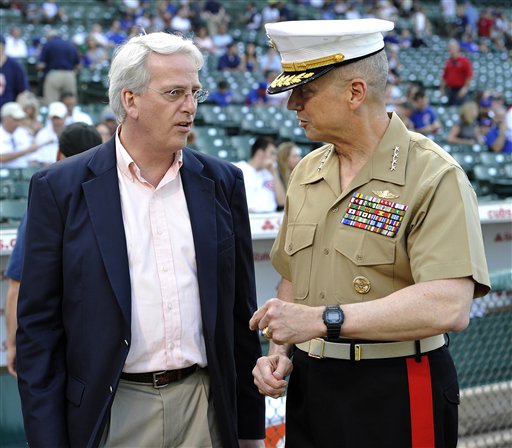 Shortly after the ceremony, Wrigley was filled with NATO dignitaries, U.S. Marine Corps. General John Allen threw out the ceremonial first pitch. Rumors had it that U.S. Secretary of State Hillary Clinton would sing the 7th inning stretch; she was at the game but remained in her suite. Instead, the singing was done by Ivo H. Daalder, the U.S. representative to NATO. The press boxes were never safer; there were plenty Secret Service and military personnel present, so we minded our “p's and q's.” No worries, though. Despite the atmosphere, the game and series were still the focus.

There was one somber note for the White Sox team this weekend, though. Today the team will attend the wake of former Sox coach and player Kevin Hickey. The 56-year-old batting practice coach was found unresponsive in his hotel room the day before the season opener and passed away last week.