What was the first non-wooden building ever built in the city of Chicago? And who built it?

It was a simple question and we thought the answer would be simple, too. It was pure curiosity (Love it!). Except ... we missed the boat on the answer, at least from Sharzi’s vantage.

First, what we got right. We made a good decision by hitting up the city’s official cultural historian, Tim Samuelson. We gave him a ring, he gave us time. And with the help of our friends at the Chicago History Museum, we filmed a miniature replica that tells the story in a tight, two-minute vid.

To sum up, the first non-wooden building was a powder magazine that sat inside Fort Dearborn. Samuelson says the structure was likely built between 1803 and 1808. As he explains, “You had to have a masonry building to keep your gunpowder in because it has a tendency to go kaboom.”

Who built it? Captain John Whistler, Fort Dearborn’s first commander. (Ok, let’s presume he didn’t build it alone — his crew helped, too.) Whistler was an honorably-discharged British soldier who emigrated to the states with his wife before joining the U.S. Army. (Fun fact: One of his grandson’s, James Abbott McNeil Whistler, dropped out of West Point, became an artist, and painted the famous Whistler’s Mother.) 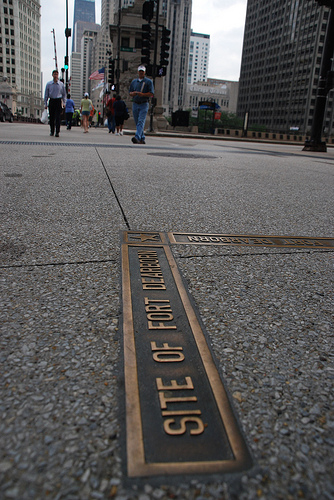 The stone structure itself didn’t last more than a few years, as the first Fort Dearborn and its powder magazine were destroyed by Potawatomi Indians who sided with the British during a raid in 1812.

But we were also curious to see where Fort Dearborn and the powder magazine would have stood today. That turns out to be be right around Wacker Dr. and Michigan Ave.

After producing a version of the vid for our TV partner WYCC, we were ready to put the story to bed since, technically, we answered the question. However, Sharzi’s interests actually lay in a slightly different place: What was the first wooden structure to be built after the Great Fire?

Hmm ... Well, we’ve got plenty of stories in the works, Sharzi, so this one will have to sit for a while. But, that day of reckoning’s likely to come sooner if your fellow Curious City fans could help with leads.

Anyone know what was the first non-wooden building constructed after the Great Chicago Fire? Who should we speak with?