When the temperature in Chicago hit 70 degrees in February this year, meteorologists were having a ball.

“It just keeps getting better and better!” exclaimed Steve Baskerville of CBS Chicago.

But when Curious Citizen Mark Mesle saw all that sun in the forecast, he had mixed feelings. “It was a beautiful day and I went to the park,” he admits. “But I also just genuinely worry. I have a 2 ½ - and a 4 ½ -year-old [child]. And it scares the hell out of me in terms of, what’s this going to be like in 2050? Are they going to be OK?”

“Few people I know can name a climate scientist in Chicago, but almost everybody knows Tom Skilling or their local meteorologist. And they have credibility,” he said.

So Mark came to Curious City to ask: Why aren’t meteorologists in Chicago talking about climate change?

Mark suspected TV weather forecasters were hesitant to mention climate change on air because of political backlash or maybe felt that talking about climate change was outside their job description.

We reached out to six meteorologists at Chicago’s major TV stations. Only one was willing to talk to us. Two of them declined to talk about the politically-charged issue on-the-record, and three more ignored our calls and emails.

So are these individuals shirking their civic responsibility? Not necessarily, says Victor Gensini, professor of meteorology at College of DuPage. Many of Gensini’s students have gone on to become TV weather forecasters.

“As a meteorologist, when you get up on camera, you’re paid to give the weather forecast,” he says. “You’re not paid to interject with your opinion of what may or may not be happening on the grand scale of climate.”

Gensini also emphasizes that studying weather and studying climate are not the same thing. Weather forecasters look at day-to-day changes, like if it will rain tomorrow or be hot next week. Climatologists instead look at long-term trends, like the average temperature over decades or even centuries. So while weather and climate are deeply connected, understanding one doesn’t mean you understand the other.

“It’s theoretically possible for an on-camera TV weather person to have little to no training in climatology,” Gensini says.

Still, some weather forecasters may choose to educate themselves in climate science by attending conferences and keeping up with research. In fact, Gensini says that one well-known Chicago weatherman is particularly climate-savvy: Tom Skilling. 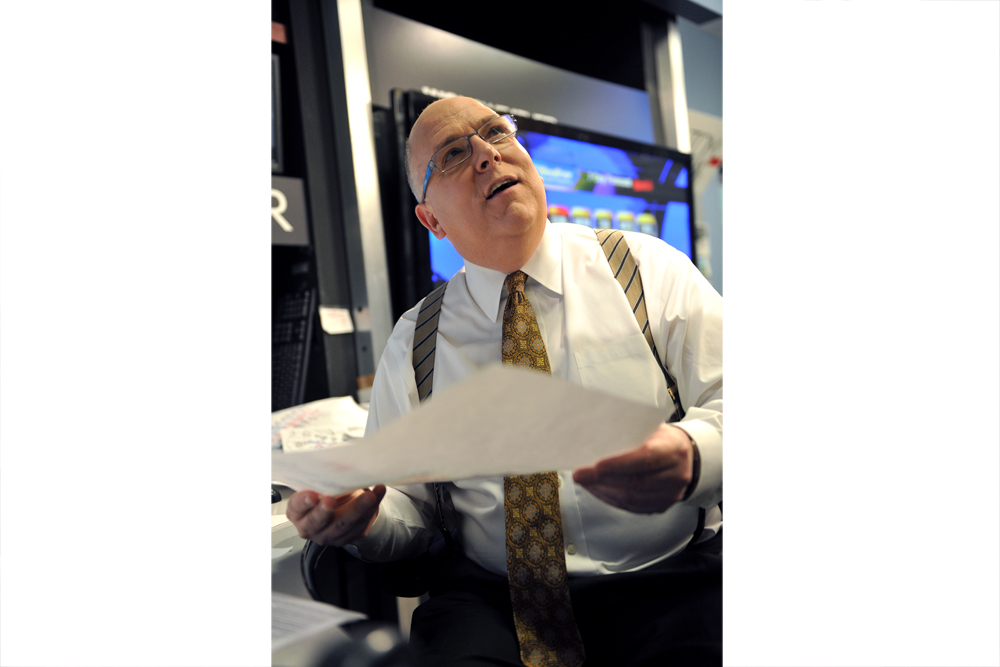 Skilling is the chief meteorologist at WGN. He frequently discusses climate change on Facebook, at public events and on TV and radio broadcasts — and, as it happens, is the only meteorologist who agreed to talk with us. A transcript of our conversation, edited for length and clarity, is below.

Curious City: When was the first time you talked about climate change on air?

Tom Skilling: I would say five, 10 years ago.

CC: What was the reaction?

Skilling: Surprisingly little. And you know what I’ve found? The folks who really are against climate science make noise far beyond their numbers. You’ll get a couple of letters saying you’re an ignorant ignoramus and you drunk Al Gore’s Kool-Aid. But they aren’t as numerous as you might have suspected!

CC: Back in February when it was strangely warm, climate change was on a lot of people’s minds. Did you mention it on air?

Skilling: I did indeed. In fact, I mentioned it on radio and television, and all forums.

CC: How did you make that decision?

Skilling: A lot of this comes [to me] stream of consciousness. So I’ll say on the air, “This is a North American temperature map. You folks may not have looked at these over the years. But at this time of the year, you oughta be seeing a big area of 30 and 40 and 50 below zero temperatures. And look — we’re not cooling in the Arctic the way we used to. And this conforms with what we know about what’s happening on the planet.”

I do think it’s a hot-button issue that some people are afraid of. We’re rated every day. We have ratings services to find out how you’re appealing to your audience.

CC: Are you expected to consider those ratings in how you do your job?

Skilling: No! You know, a lot of people think this is some sort of conspiracy — that people come to us and our bosses say, “Don’t you touch that! That’s a scary subject!” I have never, in my experience, had any manager ever come to me and say, “Don’t even go there.”

I know one of our younger weather people wanted to do something on climate change and was told by a news manager, “Now, be sure you get somebody from the other side of the story.” And I stepped in and said, “There isn’t another side to the story.” I think this young forecaster felt concern. He was new, not established. But it’s not because anybody came out with an edict and said, “Don’t talk about it.” I think he was trying to avoid any pitfalls that he suspected might exist.

When you’re young and vulnerable, I think you think like that — and you should! The first three-quarters of my career, I thought they were gonna fire me every day I went to work. You hear stories in broadcasting about people who come into the station and suddenly all their belongings are out in the hallway and the office has been locked. And that’s how you’re told it’s all over, you know? So I think people hear these stories and maybe make more of them than they should.

CC: If you were a young meteorologist starting today, or you worked in a more conservative place than Chicago, do you think you would talk as vocally about climate change as you do?

Skilling: No, I don’t think so. And I can think of regions of the country where you better not. If you were working down in the deep South where there’s a more conservative bend, you better think about it. I don’t quite know how I’d handle that; it would be a dilemma.

CC: Is there an obligation for local broadcast meteorologists to talk about climate change? Or is it above and beyond the call of duty?

Skilling: We’re communicating about a fascinating system, our atmosphere and all. And when it does unusual things, I think it’s important for us to put in context what’s going on. I don’t set out to change minds. Therefore you don’t come off like you’re preaching. You’re trying to educate and illuminate what’s going on. Because people will reject preaching if they think that’s what you’re doing to them. You want to bring them along.

I didn’t immediately buy into the whole climate change scenario. When I used to hear model forecasts that the Arctic was going to melt and all, I thought, “Well you’re going to have to prove it to me.” My mind was changed by the evidence as I went along. And I see great compatibility with the thinking on climate change with what I see in my daily work. I see things happening I haven’t seen happen before and I say, “Darn it! They’re right about that.”

CC: Do you consider talking about climate change part of your job?

Skilling: When something happens that’s out of the ordinary, I think part of your job is to say, “This is out of the ordinary, and here’s how we place this in context. And gee, isn’t it interesting that we’re seeing more of these situations show up more frequently?” I’ve been interested in the weather since I was a little kid. It’s been all-encompassing. It’s been my life, essentially. And I view it as kind of taking my viewers and my listeners on a trip through my own sense of fascination with what’s going on, you know?

When I see a storm develop, I’m not being sadomasochistic when I say, “That is absolutely fascinating to watch how all of this is coming together.” And the same thing with our climate. What happens if we start submerging our cities? I have no idea! It’s fascinating and frightening at the same time.

Before we left, Skilling had one more thing to say to our question asker, Mark.

Skilling: Mark, I know exactly where you’re coming from. You probably are thinking — I mean let’s be blunt about it: “Why aren’t they saying more about it? Why aren’t people standing up and screaming on top of the mountain?” And I share your frustration. And I must say, I wish more people were talking about it too in my line of work.

More about our questioner: 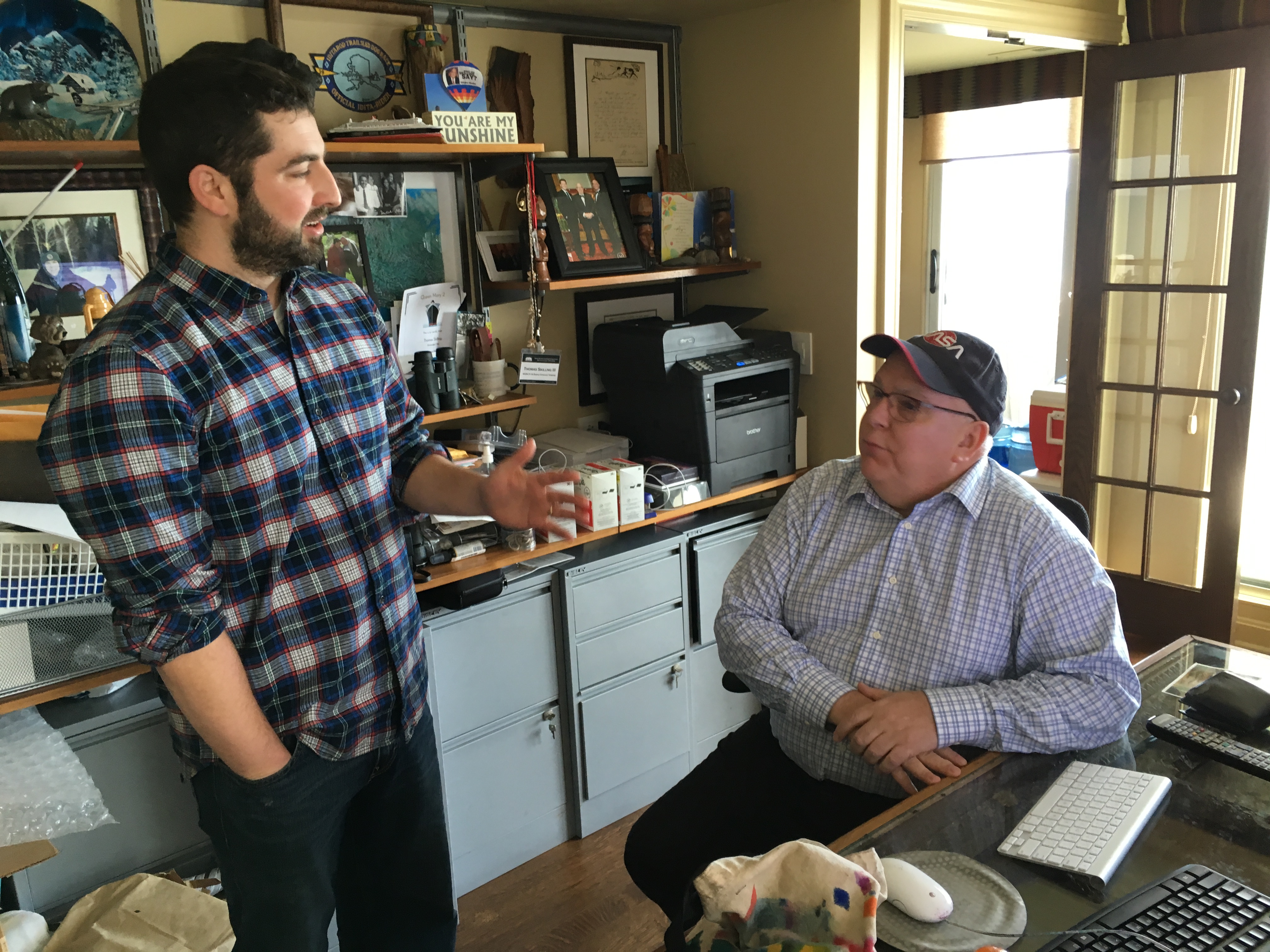 Mark Mesle is the outreach coordinator for the Cook County Clerk’s Office, and founder of the website 50 Year Forecast. You may remember Mark from a previous Curious City story on climate change. Mark says he appreciated hearing Skilling’s perspective on his question — but in the end, he still can’t help but worry that more meteorologists aren't following suit. “My daughter Charlie who’s two and a half, every year of her life has been the hottest year on record. Yet for the most part, we still treat it like it’s business as usual.”

Jake Smith writes and produces radio stories in Chicago. Follow him at @JakeJeromeSmith.