Illinois’ newly-enacted school spending law funnels new state education dollars to underfunded schools, opening the door for more equal school funding in Illinois over time. But a new report released on Thursday shows just how hard it will be for those schools to catch up.

Nearly 60 percent of all Illinois public school students — over 1.1 million children — are enrolled in school districts rated as underfunded or borderline underfunded, according to an analysis released to WBEZ by IFF, a community development organization that also assesses school district capacity in Illinois and across the U.S.

“As great as the new law will be in getting us to move toward providing adequate funds, it is still only a down payment on the funds we need to get there,” said Jose Cerda III, vice president with the Chicago-based IFF, formerly known as the Illinois Facilities Fund.

Illinois’ new school law, enacted in August, sets the stage for the state to boost funding for its neediest schools by putting them at the front of the line for new education dollars approved by lawmakers.

But there is no guarantee of additional funding over time. The state’s education budget will still be debated each year as part of the annual budgeting process. This year, lawmakers approved about $350 million in new state education dollars to be funneled through the new formula.

“There is only change for real if the formula is funded year in and year out,” said Tim Farquer, superintendent of a small school district in Williamsfield, between Peoria and Galesburg, and a member of an advisory committee for IFF’s report. “Otherwise, it’s just smoke and mirrors again.”

A bipartisan commission created by Gov. Bruce Rauner found that Illinois needs to increase spending by at least $3.5 billion — and as much $6 billion — over the next decade to adequately support all Illinois schools. The financially-strapped state, which has a bill backlog of about $14 billion, plans to spend nearly $8 billion on schools this year, excluding pension costs.

In addition to funding, IFF looked at academic performance across Illinois, finding that just 12 percent of students had access to a “high-performing” school based on state test data from the 2013-2014 school year. Only the North Shore districts that include Glencoe, Winnetka, and Wilmette had enough high-performing seats for every child enrolled. IFF defined high-performing based on an ambitious goal of having 80 percent or more of all students performing at grade level in reading and math. This is just shy of the a new goal set by the state to bring 90 percent to grade level by 2032.

Illinois currently has one of the widest spending gaps between wealthy and poor districts in the country and ranks last among all states in the amount it contributes to its public schools. Illinois school districts rely heavily on property taxes to support their schools, with state money meant to make up the difference in property-poor districts. This is what the historic new spending law aims to unwind. 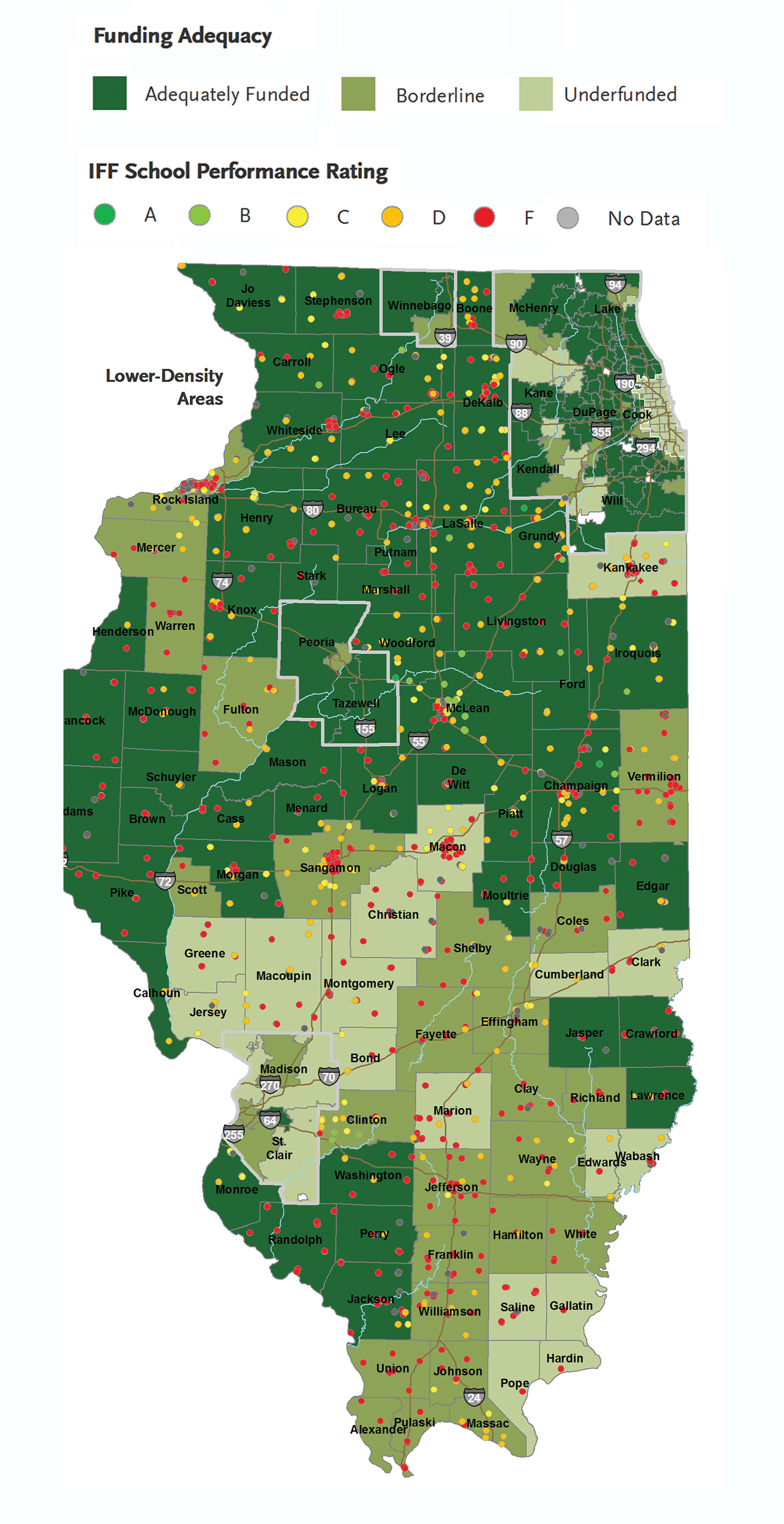 “We have a funding system in place now that is arguably one of the best in nation — Illinois went from having one of the worst to one of the best,” said Bobby Otter, budget director for the Center for Tax and Budget Accountability, a nonprofit research and advocacy group.

As a starting point for looking ahead, IFF found that 57 percent of all students are enrolled in underfunded or borderline underfunded districts. The group calculated that by comparing each district’s revenue to a “foundation” spending level calculated by the state. That foundation level — $8,672 per student in 2014, the year IFF studied — reflects what it takes in property taxes and state revenue to properly educate a child. IFF weighted figures to reflect cost-of-living differences and to account for higher costs of educating needier students.

Not surprisingly, the state’s poorest districts were five times more likely to have inadequate revenue. High-income districts on average spent one-third more than low-income districts — or about $3,000 more — in 2014, IFF found. The figures are $12,704 vs. $9.549.

A greater proportion of students in urban areas went to underfunded districts, the researchers also found. Chicago is considered underfunded, getting just 71 percent of the foundation level in 2014. But overall, downstate areas tended to be more poorly funded than in the north. In southern Illinois, most districts were underfunded or borderline, the report found. 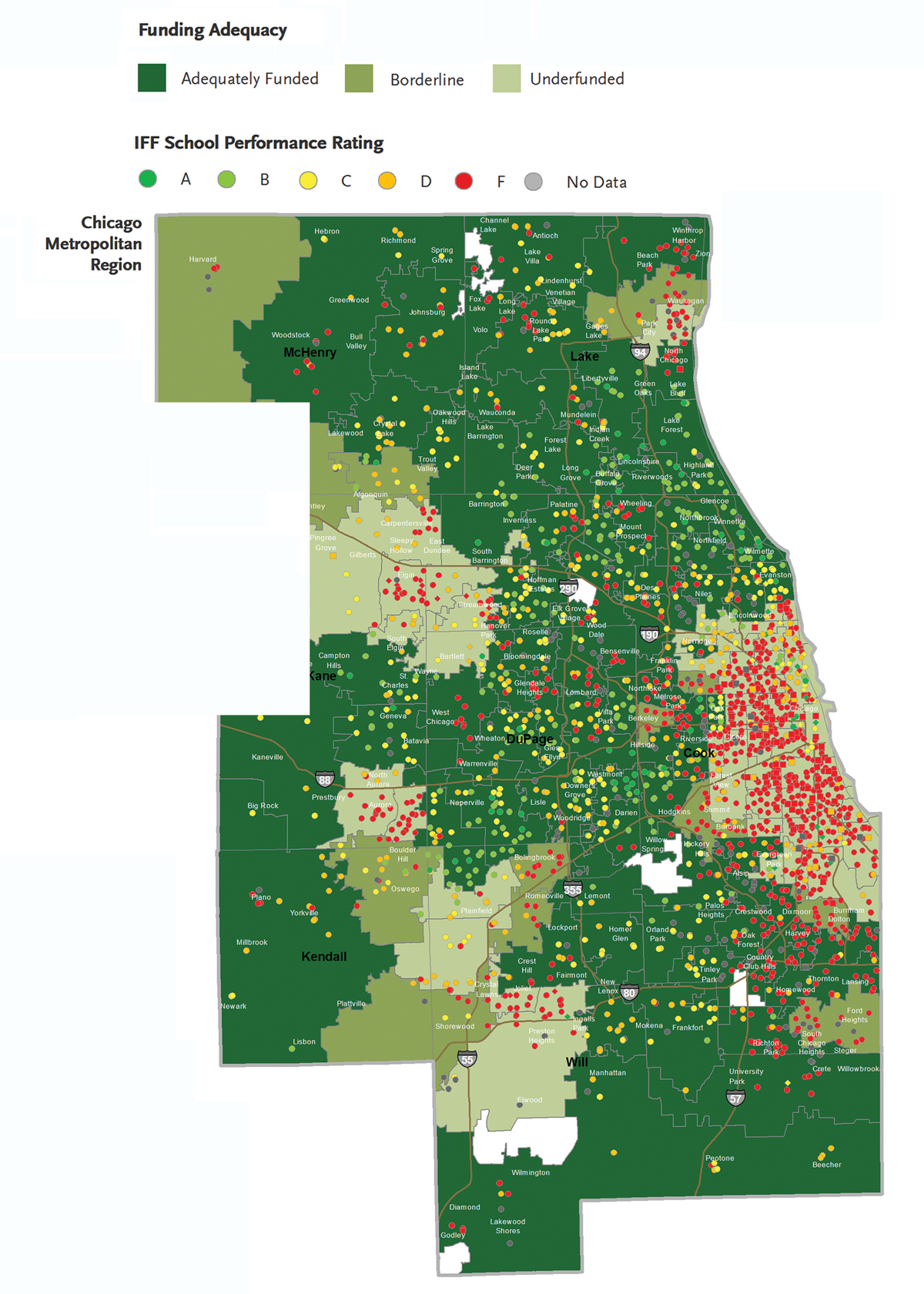 The study authors emphasized that more money doesn’t guarantee academic success, but they made clear that adequate funding is a prerequisite.

“The study shows there is a very strong relationship between adequate funding and performance,” Cerda said. “So yes, this is the first thing that we need.”

Locally, they highlighted Elgin-area School District U-46, which serves more than 40,000 students in 11 northwest suburbs, for its academic performance given its limited resources and its high-need student body. The study includes an online tool with granular data to encourage schools and districts across Illinois to learn from each other.

“We know there are exemplars out there that are getting things done,” Farquer said. “We should all try to emulate what makes them successful.”

Editor’s note: Grossman is moderating a panel discussion on this report on Monday.

An earlier version of this story incorrectly referred to the organization IFF as the Illinois Facilities Fund.