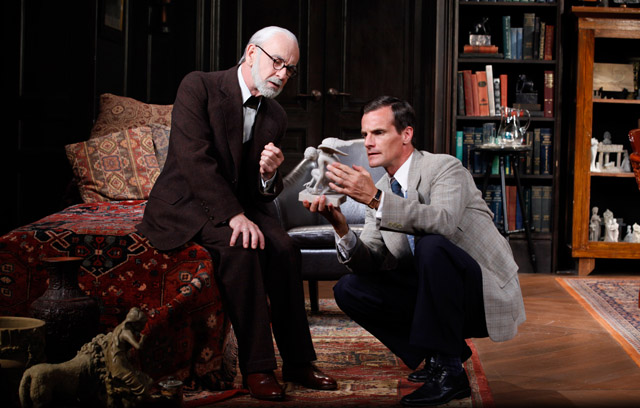 Jonathan and I debate the Midwest premiere of Shattered Globe’s Her Naked Skin, about women
fighting for the vote in England and what it cost them. We then consider the question what it
would take to bring equality for women to the Chicago stage. In Rebecca Lenkiewicz’s play, at
least, the women win their battle. Thursdays-Sundays through June 3 at Stage 773 on Belmont;
tickets $18-$34. –KK

Freud’s Last Session, Wednesdays-Sundays through July 15 at the Mercury Theatre on
Southport; tickets $45-55.

Sigmund Freud and C.S. Lewis have been debating for quite a while in Mark St. Germain’s
drama. But last week a new pair of actors stepped in to portray them: Coburn Goss (The Crowd
You’re In With at the Goodman, Dead Man’s Cell Phone at Steppenwolf) and the flinty, unstoppable Mike Nussbaum. Guess which plays which. –KK

Living Large in a Mini Kind of Way, Thursdays-Sundays through June 17 at the Viaduct on
North Western Avenue; tickets $12-$40

Opening Thursday is Teatro Luna’s new show, the first ever created by an artist
from outside the company. Obie winner Diane Rodriguez is in from Los Angeles to direct the
world premiere of her own play, featuring the splendid Sandra Marquez (Anna in the Tropics at
Victory Gardens, Mariela in the Desert at Goodman, among many others) alongside four
ensemble members. –KK

And now for something truly and entirely fabulous . . . meaning, of course, “like a fable,” as Vintage Theater Collective and Edgewater Arts Center present the first-ever Fable Festival in a variety of non-traditional spaces in Edgewater and Andersonville. The all-original works are non-traditional as well, with nary a moral of Aesop within sight nor sound. Be warned, too, that not all of the presentations are suitable for kids even though puppetry, masks, live music and food may be involved. For this unique collection of original plays and performances, the presenters have called upon 20 artists and troupes from the ‘hood, among them Greg Allen of the Neo-Futurists, Hearts and Brains, Lifeline Theatre, New Beast Theatre Works, the Sweat Girls, Terence Mosley with Onus Theatre Company, and playwrights Brett Neveu, Christopher O. Pena, Lisa Dillman, Mia McCullough and Thomas Bradshaw. –JA

Pedro Calderon de la Barca, often called “the Spanish Shakespeare,” penned his best-known play in 1635. La vida es sueno, or Life Is a Dream has been translated and adapted into scores and scores of English versions, but perhaps none as radical as what Blake Montgomery is engineering at The Building Stage. The play—which is something of a moral fable (see above)—tells of a Renaissance prince raised as if he were a prisoner, and then unexpectedly set amidst the splendors of the royal courts. Montgomery (who, unusually, is acting in this production as well as directing) re-imagines it as a live rock nightclub show. Patrons are invited to buy a drink and seat themselves at one of the intimate theater’s cabaret-style tables. –JA