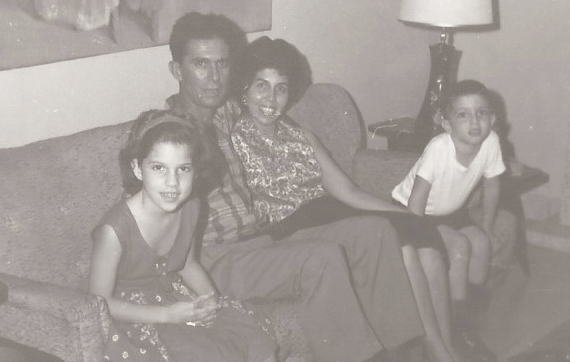 Fifty years ago today, my family and I arrived in the U.S.

The night before, we’d gathered just outside of Havana, my parents, my brother and I, joined by 40 other people to board a 28 foot boat to escape from Cuba.

For my parents, it was goodbye forever to the life they'd known. For my brother and me, a transformation of the promise of whatever life we'd had, or could have had, under any circumstances, in Cuba.

For this queer girl (in every sense), that's been a gift.

Over the years, I’ve heard often enough about my parents’ courage in embarking on this journey. Those were and remain a treacherous 90 miles that now, so many years later -- and regardless of whatever politics we espouse -- are a grave of bones, the last refuge of all the people who didn’t make it.

But as an adult, I’ve also heard some less charitable takes on my parents’ decision. They were reckless, I’ve been told, to risk our lives like that.

The truth is that, as a parent myself now, I can’t imagine bundling my son and taking him on such an excursion.

But as a parent now, I’m also much more relieved to be here and not there. Not for the material things but for the less tangible ones: my son is growing up surrounded by a community of diverse backgrounds (Cuban and every kind of Latin American, Eastern European and Vietnamese, Irish and African and African-American, Middle Eastern, Muslim and Buddhist and pagan, Hindu and every imaginable kind of Christian and Jew, and every color under the sun, and with every family structure imaginable), diverse experience (artists and writers and political operatives, teachers and doctors and nurses and computer geeks, bankers and drug counselors and construction workers, teachers and real estate agents and PhDs and high school drop outs, bakers and stay at home moms and dads, mechanics and lawyers and journalists), diverse political affiliations (a Tea Party great-uncle, a communist -- not just a lefty, a communist -- cousin, a slew of Republicans of different stripes, Democrats of all sorts, anarchists on the left and right).

All of these people come and sit at our table, tell their stories, argue their ideas, and talk about their successes and their failures, their happiness and their pain.

It’s not that this couldn’t happen in Cuba. But it would be less likely. There’s simply less diversity by race and class, and while there’s much more racial miscegenation, there’s -- ironically -- much less social mobility. And more importantly, while conversation is certainly smart and provocative, it lacks the kind of difference, and tolerance of difference, that I experience here. And, as trite as it sounds, it lacks the freedom we have here.

I have a dear friend back in Cuba, a brother almost, who’s got a well-earned reputation as a conversationalist and host. He’s not quite part of the nomenclature, but he’s well-protected, comfortable, a man of certain privilege. And I so enjoy his company when I visit. But there comes an inevitable juncture in every visit when the conversation goes astray and he suggests we finish it out on the terrace, where there’s fresh air and the sounds of the city -- wind and noise to cover our voices in case we’re being listened to in his living room.

I used to be amused by this, to joke about it. And now I just find it sad.

My parents would say -- certainly my father would insist -- that this was the whole point of coming here. That the freedom I experience in my home, at my table, is precisely what they were offering to us by coming over, by risking our lives.

But, honestly, sometimes it just sounds so hokey, especially from my parents, who weren’t always so tolerant (and also were sometimes shockingly tolerant).

Then I look at my own son. And when I doubt my own courage, I just say thank you, from the bottom of my heart, to Pepe and Alicia, who came over on that boat and brought me, sparing me the agony of having to make such a decision myself.