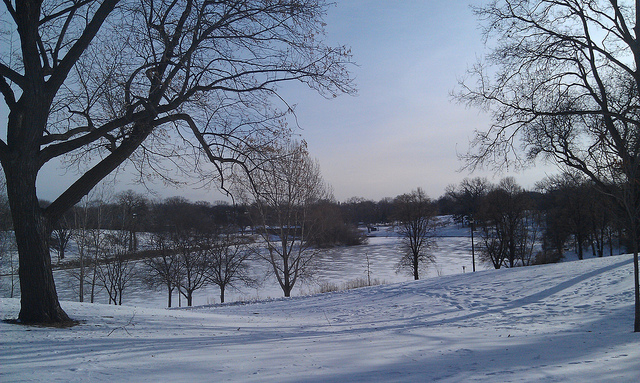 During his announcement Friday that federal and state agencies would commit an additional $6.8 million towards Millennium Reserve projects, Gov. Pat Quinn repeated the claim that the massive Southeast Side restoration initiative constituted the “largest open space project in the country.”

While it is undoubtedly ambitious, and unique in a few ways, the “open space” project is not exactly that. After all, the initial project area (the “Calumet Core”) is home to nearly half a million people, as well as 2,000 acres of industrial land.

The Illinois Department of Natural Resources prefers the more accurate, admittedly less sexy, term “one of the largest collaborative urban open space projects” in the country.

At 140,000 acres, the Calumet Core certainly is a huge tract of land. Open space holdings in that area, however, only total about 15,000 acres. That includes Indian Ridge Marsh, the Burnham Greenway, and other high-profile projects.

About 60 percent of that open space land is owned by the Cook County Forest Preserve District. The Chicago Park District recently acquired more than 680 acres in the Calumet area from the city, which it plans to convert into open lands.

Urban growth has long reduced open land in and around cities, and Chicago ranks at or near the bottom, depending on methodology, of parkland per capita.

“The significance of it being an urban project is that people have the best opportunity to become connected to the outdoors in the places most easily accessible to them, such as where they live,” said John Rogner, chairman of the Millennium Reserve Initiative steering committee that Quinn unveiled Friday.

Several cities and counties around the country have large urban open space projects — Baltimore, Madison, Wisc., and Harris County, Texas, for example — but unlike the Millennium Reserve they are strictly city- or county-led.

By partnering governments and civilian organizations, Rogner said, the Millennium Reserve team may be able to more quickly acquire new land than conservation groups would be independently.

Larger projects consolidating and connecting open space exist in the U.S., but they don’t share the Millennium Reserve’s urban focus. Plans to conserve land in Pennsylvania’s Delaware Valley, and in the Washington-Baltimore metro area, focus on rural greenways and, apart from their emphasis on farmland, might be considered more traditionally conservationist projects than Millennium Reserve.

Seattle’s Open Space 2100 plan is both collaborative and urban. It took the form of a generalized plan, however, while Millennium Reserve is, according to the department of natural resources’ Lisa Cotner, “an on-going initiative to make on-the-ground projects happen.”

What these other projects really illustrate about the Millennium Reserve is how wide-ranging its goals are — industrial resurgence, economic development, recreation and ecological restoration all share top-billing with open space, depending on who you talk to. The broad scope may help clear the path for action by the project’s more than 50 partner organizations, but it’s also likely to foster some disputes over just what the “open space” project is all about.