Fifty-three groups have signed a letter of support for the union, including big names like Black Lives Matter and Action Now, and lesser known groups like Stop Moving Backwards and Solidarity. Some groups on the list have gotten donations from the union’s foundation.

One-by-one, supporters came to the microphone Tuesday to explain why they supported teachers and what they hoped would come out of the teachers’ contract fight.

April Stogner, a local school council member at Mollison Elementary, said: “Some of our teachers have 30 to 40 kids in a class. How can a teacher possibly give students the attention they need with these kind of classroom environments?”

And Sherise McDaniel, with the organization Parents 4 Teachers, added: “How about we give black people access to jobs and affordable housing instead of closing their schools and hospitals and letting their neighborhoods crumble to the ground.”

Some of those requests, like affordable housing, won’t be solved with a teachers’ contract, but the long list included some school specific issues like class sizes.

The current contract does include guidance for class size limits, but a WBEZ analysis in 2013 found 50,000 children in Chicago Public Schools were in classrooms over the recommended limit. That number hasn’t changed much, according to a 2015 story by the Better Government Association.

Under state law, the school board in Chicago isn’t required to bargain over much more than wages and benefits.

“The officers of the union are restricted by law to say, were there a strike, it would only be over compensation or evaluation issues,” said Steven Ashby, a professor at the University of Illinois who led the coalition supporting the union. “They cannot say, if they strike, that it’s over ‘we want smaller classes and they keep getting bigger. We need nurses in the school. We need social workers if we want to deal with the stress and the crime and the pain of our students and they’re getting cut. We need more special education teachers.’ The board refuses to bargain over any of these issues.” 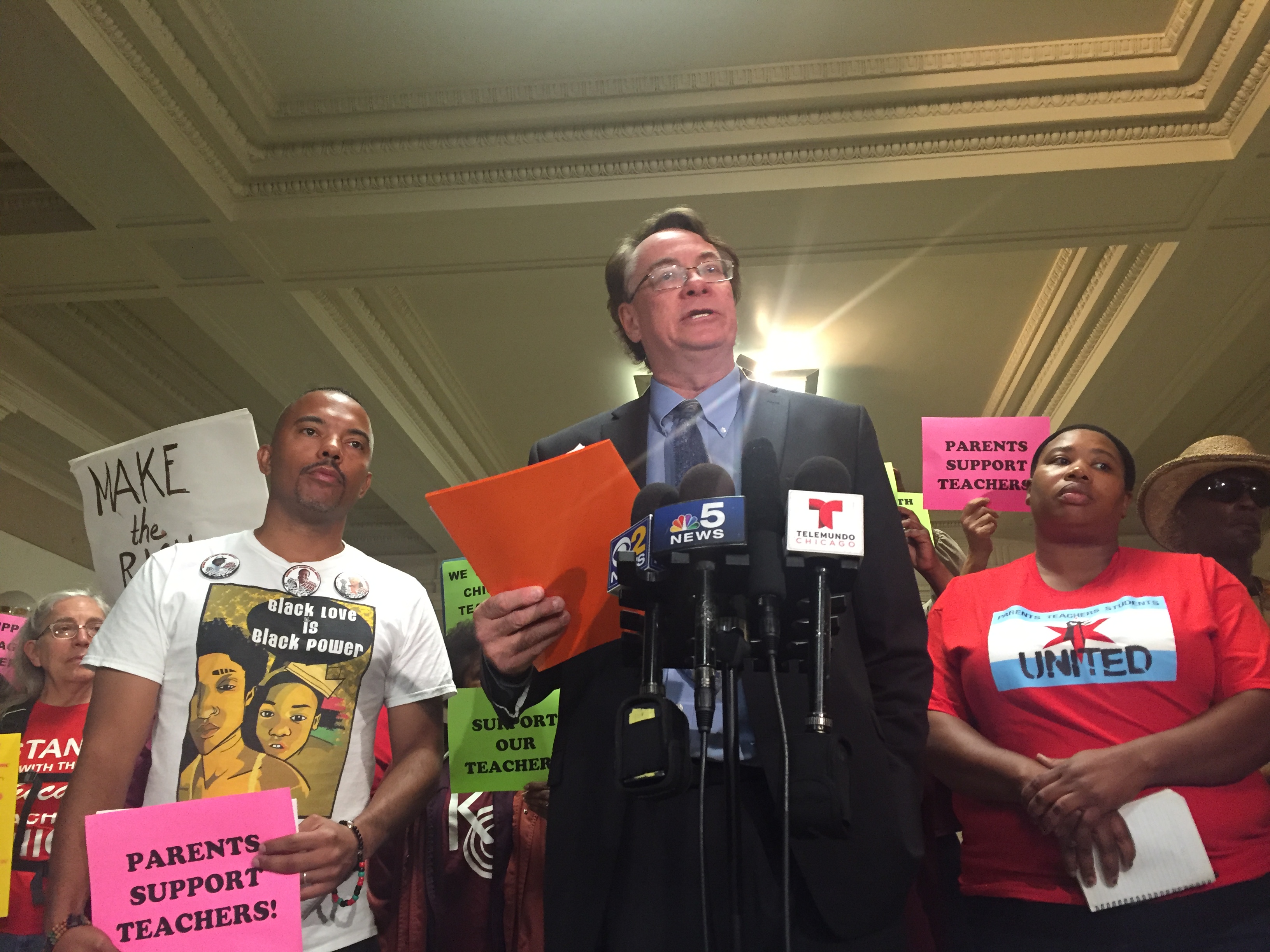 District spokeswoman Emily Bittner said the board has discussed some of these “quality of life” issues and came to a tentative agreement this year on a number of them, including giving teachers less paperwork and more freedom over grading, as well as installing air conditioning in all schools.

But teachers cannot strike over those things. They can only strike over pay and benefits.

Currently, the median salary for a CPS teacher is about $78,000. The median age is 40 and the median years of experience is 11. These all factor into the total contract costs, but the two sides disagree on whether the offers currently on the table mean more or less money for teachers.

“CPS is open and willing to listen to any idea that the CTU leadership presents that makes the agreement work better for both parties and allows the district to operate within its financial constraints,” Bittner said in an email.

Issues like how many social workers or counselors are employed at each school are areas that Ashby and other activists said could be issues that Emanuel settles with the teachers and wins back some public approval.

“I think the mayor is reeling and is extremely unpopular right now, so if he wants to be popular with the people of Chicago, I think he’s going to respond,” Ashby said.

But mayoral ally and floor leader Ald. Pat O’Connor, 40th, said Wednesday no matter how unpopular the mayor is, the city’s financial reality is what it is.

“I think the case doesn’t have to be made this time that the city is tapped,” O’Connor said. “I think most people who have been listening realize that that’s the case.”

It’s a point echoed by Ald. Howard Brookins, 21st, at a community forum on schools and violence Monday.

“What are we willing to sacrifice in order to have those things?” Brookins asked of the teachers’ and activists’ demands. “I think that in a perfect world we’d have all those things, but there is an economic reality and something has to be cut.”

There is a proposal sponsored by Ald. Susan Sadlowski Garza, 10th, and Ald. George Cardenas, 12th, to release additional money from special taxing districts known as TIFs, but it’s stalled in committee.

“I’m optimistic that my colleagues in the City Council will do what it takes to avert a strike if that will work, but even if they got all of the TIF money, it’s still not enough to do all the things that we’ve been requested of,” Brookins said.

The union’s allies rejected that stance, saying the mayor and city leaders could find additional resources if they had the political will to do so.

Becky Vevea is an education reporter for WBEZ. Follow her at @wbezeducation.