Nearly a year ago, the U.S Department of Justice delivered a scathing evaluation of Chicago’s police training and practices.

The report harshly criticized the way misconduct investigations are handled, highlighted the breakdown of trust between police and residents, and called on the Chicago Police Department  to “do a better job” and to demonstrate “that it presumes community residents to be allies rather than suspects.”

Young activists in Chicago’s immigrant, Latino, and African-American communities said they have some history of collaborating with one another on direct action campaigns against police brutality. But in the last year, they have worked hard to build a more sustained relationship to push for change. As Chicago officials and the Chicago Police Department claim to be working on improving relations with young people in these communities, the young people themselves are proposing a different vision of what it will take to make Chicago safer for everyone.

These young Latino and African-American activists said they’ve seen no evidence that the department or the city has taken the DOJ’s recommendations to heart — and that it is clear those entities do not know how to restore community trust in police.

Two programs in particular — CPD’s controversial gang database, where police keep an electronic record of individuals whom they believe are gang-affiliated, and the city’s $95 million proposed police academy on the West Side — embody the disconnect among city, community, and police, the activists said.

Here is a closer look at those issues.

In March 2017, Wilmer Catalan-Ramirez, a Guatemalan national, was arrested by Immigration and Customs Enforcement agents at his home in Chicago’s Back of the Yards neighborhood. Catalan-Ramirez ended up suing CPD and the city of Chicago, alleging that he was falsely labeled a gang member, and that this designation led to his immigration arrest.

“That’s how we found out that Wilmer had wrongfully been placed in the gang database, and that’s how ICE ended up detaining him, or getting ahold of his information,” said Reyna Wences, an organizer with Organized Communities Against Deportations (OCAD).

The gang database is, in fact, a subset of Chicago’s Strategic Subject List, which CPD uses to track individuals that it believes are likely to be involved in violence as either perpetrators or victims. According to city data, about 65,000 Chicagoans on the Strategic Subjects List are considered “gang affiliated,” and more than 95 percent of those are black, Latino, or both.

“It is really just another unconstitutional tool for the police to criminalize young people,” said Tania Unzueta, policy director for Mijente, another immigrant-led group.

Mijente and OCAD joined with the black-led organization Black Youth Project 100 (BYP100) to call for an end to CPD’s so-called gang database.

“Is there a way to actually find ways that reduce violence in our communities that don’t end up with just a list of black and brown people?” Unzueta asked.

The database, Unzueta said, contains errors that could have particularly far-reaching effects for undocumented immigrants.

Catalan-Ramirez, who is still fighting his deportation case, has reached a settlement with the city and CPD. As part of the settlement, CPD took the unusual step of admitting it had no evidence to verify that he is a gang member.

A Chicago police spokesman wouldn’t discuss the gang database, citing pending litigation. But in an interview just after CPD’s admission in the Catalan-Ramirez case, Superintendent Eddie Johnson told WBEZ that he still feels that the database is reliable. However, Johnson added that “in any facet of life that we deal with there may be errors.”

The CPD admission has added fuel to critics’ argument that the gang database is flawed and can have irreversibly harmful effects on some people. While it might lead to immigrant residents’ deportations, Unzueta said non-immigrant black and Latino Chicagoans often face longer prison sentences for crimes when they are considered gang-affiliated. 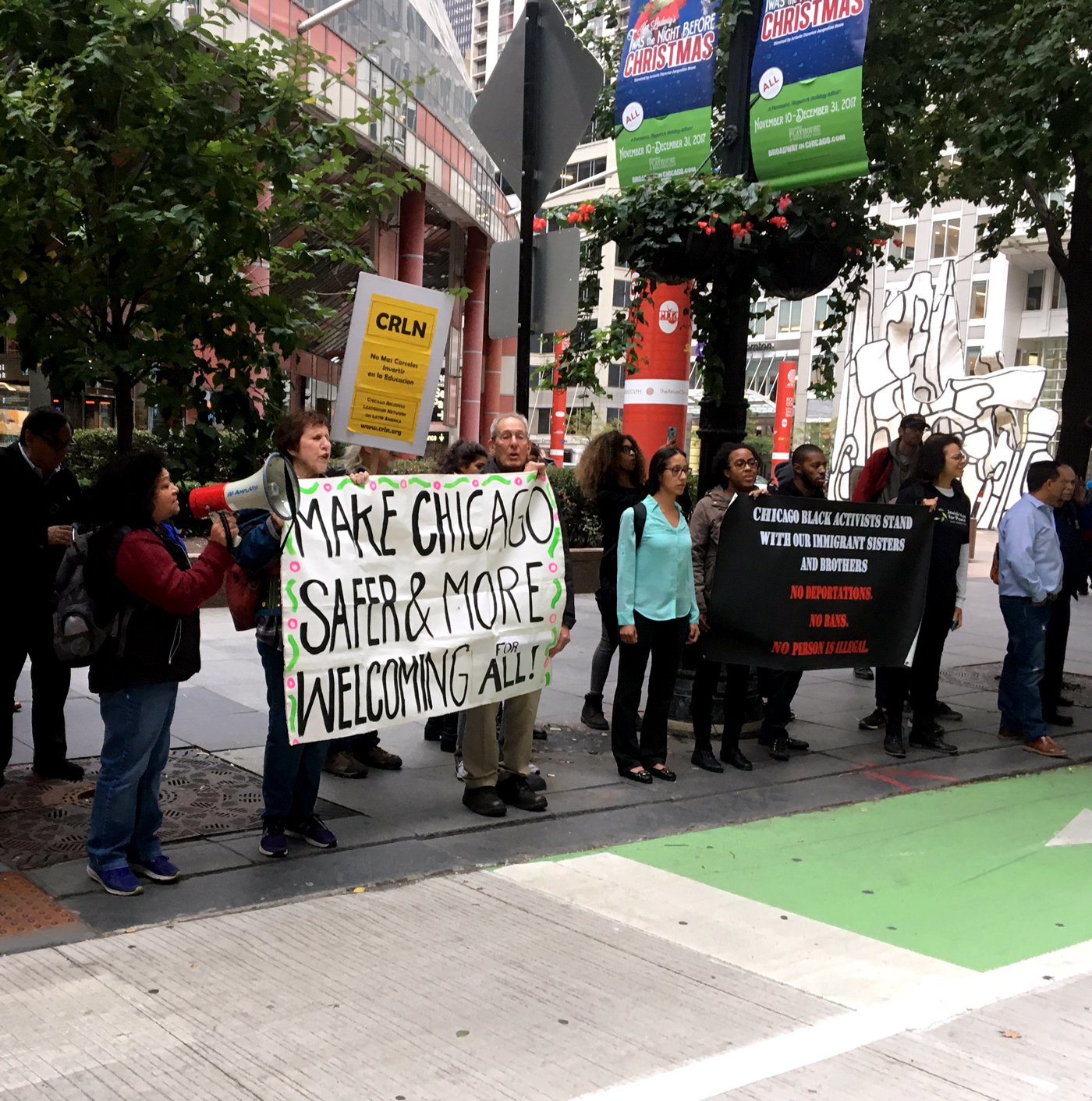 Unzueta said black-led activists in the coalition immediately understood why the gang database was an area of common concern. But she said it has taken longer to explain to the wider Latinx and immigrant communities why police may be a threat.

“Among the immigrant community there’s no other idea about how to keep the community safe,” Unzueta said. “And I think that’s the part that we’re trying to talk through and work out.”

While the coalition has conducted joint teach-ins and disseminated educational materials about the gang database, Wences said they have had to be mindful of their differences, as well.

For both Unzueta and Wences, the 2017 DOJ report bolstered their long-held beliefs that CPD fails to engage young Latino and African-American residents in productive ways. But they said they’re not expecting any real change, such as gang database reform, to result from that report. Instead, they said they and their black allies will focus on growing grassroots support to address the problems of the database and to pressure City Council’s black and Latino caucuses to force a change.

In summer 2016, Chicago Mayor Rahm Emanuel announced plans to build a $95 million public safety training facility on the city’s West Side. The need for more and better training was sternly addressed in the DOJ report.

But a new and expensive training facility was not the answer, according to activists with “No Cop Academy,” a coalition of local groups — including People’s Response Team, Black Lives Matter, and BYP100 — that are challenging the city’s plan to spend millions of dollars for a police facility in a mostly black, disinvested neighborhood on the South and West sides.

“More police won’t help our future because the police have been treating us unfairly,” said Nita Tennyson, 20, of Assata’s Daughters, the group of young women leading “No Cop Academy.”

The activists said they would rather spend that money on schools, mental health centers, job training, and youth programs. The mayor has said the academy would spur that kind of local economic development.

Young black and brown organizers have taken the city to task for spending more than $1 billion a year on the Chicago Police Department. Even though the DOJ report calls for more and better police training, No Cop Academy activists said a proposed police training facility in West Garfield Park could lead to increased militarization in neighborhoods.

“I’m involved in No Cop Academy because I feel Rahm Emanuel is way too much on the police when he could be giving us resources, especially the youth,” Tennyson said. “We need jobs, better housing for people because there are a lot of homeless youth.”

Tennyson said she supports collaborations between Latino and African-American groups because they represent the future.

“We’ve all been working together as a unit. It’s very important for this coalition to be with the black and the Latino youth groups because we are the community. We’re growing up and soon we’ll be able to vote,” Tennyson said. “This is an opportunity for our voices to be heard.”

In November, the Chicago City Council approved a $10 million purchase of 30 acres of vacant land for the proposed academy.

Matt McGrath, an Emanuel spokesman, said in a statement that working with the city's youth and the public safety facility are "not an either/or proposition."

"From the very first days of this administration, Mayor Emanuel has prioritized investments in Chicago's young people, more than tripling funding for summer and after-school jobs programs, mentoring and early childhood education," he said in the statement. "As a result, more than 30,000 young people will have access to jobs in the summer of 2018, up from 14,500 in 2011, and we're on our way to making mentoring universal for young men in the eighth, ninth and tenth grades.

"At the same time, the new public safety academy will replace several outdated facilities and provide Chicago's first responders with the state-of-the-art training facility they need to maintain professional excellence and to keep our communities safe. It will also serve as a catalyst to economic activity and growth in a community that needs it."

This story has been updated to include a response from Mayor Rahm Emanuel's office.