Man, I love a good roll call at a national convention. And Wednesday night’s at the DNC didn’t disappoint, with its odd collection of state facts, jabs and braggadocio. 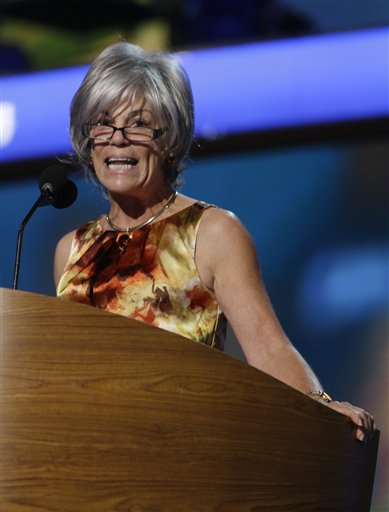 "We are a city that pays three-and-a-half billion dollars annually in federal taxes and raises $5.6 billion dollars in local taxes to support our city. Our great nation was founded on the fundamental principle of resistance to taxation without representation, yet we continue to endure that in the District of Columbia. So we ask you, please America, as we work to re-elect President Obama, work with us to bring justice and equality to the District of Columbia," Gray said, with a D.C. statehood sticker on his jacket.

A little later, the Virgin Islands rep made a similar plea: “We ask Americans for their support so that one day we too will be able cast our votes [in the presidential election].”

Puerto Rico skipped a plea for statehood. Instead, it declared itself “the land of Sonia Sotomayor, the first wise Latina on the Supreme Court ... here to support our great amigo ... in favor of el presidente de los Estados Unidos, Barack Obama.”

Most awkward moment? When Mississippi passed — it just looked like they were totally disorganized — and then it turned out that they were only passing so that Ohio, dubbed “the center of the universe” by party chairman Patrick Gaspard earlier in the week, could put the president over the top as the party's nominee.

Alabama boasted that it’s the state with the most black officials per capita and “where the right to vote is worth dying for.”

American Samoa claimed it’s the “only part of the country south of the equator, where we have our nation’s cleanest air.”

Speaking for the Arizona delegation, C.C. Goldwater, Barry Goldwater’s granddaughter, said, “My grandfather wouldn’t recognize the Republican party of today. My grandfather believed in personal freedom, the right to privacy and a woman’s right to choose.”

Delaware underscored its ties to the Biden family — “the home of of Dr. Jill Biden” —  and boasted that it was “the first state to ratify the Constitution.”

Guam said it was “where America’s day begins” and called for a military build up “done right.” (!)

Hawai’i cast its votes “in the memory of the president’s mother and father ... for our keiki o ka ‘aina, or child of the islands.”

Indiana, “the heart of the heartland,” reminded the world that its late Democratic Sen. Birch Bayh shepherded Title IX through Congress and claimed that Obama’s “commitment to the auto industry saved 150,000 Hoosier jobs.”

Kansas declared itself “the birthplace of the president’s mother ... where Kansas citizens fought against segregation in Kansas vs. Board of Education.”

Kentucky “showed the nation how Democrats can win in the south” and also declared itself “home of a reinvigorated and rejuvenated auto industry and host of the one and only vice presidential debate in which Joe Biden will deliver a knockout punch to Paul Ryan.”

Louisiana: “Home of the nation’s richest gumbo of culture.”

Maryland: “The number one state state for innovation and entrepreneurship, for public education in America and looking forward to the Baltimore Orioles winning the world series.”

Michigan: “Home of the first Muslim-American woman elected to a state legislature.”

Nebraska: “The only state — a red state — a great state — to beat down a repressive voter registration law.”

New Mexico: “Home of the hottest chili in America.”

Pennsylvania claimed to be “where the Constitution was born, where the labor movement was born, the birthplace of Joe Biden.”

South Carolina only claimed to be “the place where the fired up chant was organized.”

Utah: “Home of the most successful Winter Olympics ever — because of 32,000 volunteers and $1.3 billion in tax support.”

Wisconsin  made sure the stakes were properly understood: “The Green Bay Packers have never won a Super Bowl without a Democrat in the White House.”

And Illinois? A snore. Michael Madigan read of the names of every Dem state elected official, and of all six congressional challengers, then finally cast our votes for “a son of Illinois.” Snooze ...