WASHINGTON — President Barack Obama is turning a historic South Side neighborhood in Chicago into a national monument Thursday, in a visit that also could provide a political lift to the city's mayor.

Obama will formally designate the neighborhood where African-American railroad workers won a significant labor agreement in the 1930s as the Pullman National Monument. In the process, the president's trip to his hometown could help boost turnout for his former chief of staff, Rahm Emanuel, who is up for re-election on Tuesday.

The White House says Obama is focused on the historical designation, which honors the neighborhood built by industrialist George Pullman in the 19th century for workers to manufacture luxurious railroad sleeping cars.

Curious City: What would it take to revitalize Pullman?

The 203-acre Pullman site includes factories and buildings associated with the Pullman Palace Car Company, which was founded in 1867 and employed thousands of workers to construct and provide service on railroad cars. While the company employed a mostly white workforce to manufacture railroad passenger cars, it also hired former slaves to serve as porters, waiters and maids on its iconic sleeping cars.

The railroad industry — Pullman in particular — was one of the largest employers of African-Americans in the United States by the early 1900s. Pullman workers played a major role in the rise of the black middle class and, through a labor agreement won by the Brotherhood of Sleeping Car Porters, they helped launch the civil rights movement of the 20th century, the White House said.

Emanuel doesn't have big-name challengers in his push for a second term, but he faces the possibility of a runoff election if he doesn't get more than 50 percent of the vote Tuesday. A Tribune poll found he's close to achieving that mark.

Before leaving Washington, Obama signed a proclamation in the Oval Office designating the Browns Canyon National Monument in Colorado, a 21,000-acre site along the Arkansas River popular for whitewater rafting. In Chicago, he was also expected to announce designation of the Honouliuli National Monument in Hawaii, the site of an internment camp where Japanese-American citizens and prisoners of war were held during World War II.

In his appearance before students at a South Side magnet school, Obama also will launch the "Every Kid in a Park" initiative to provide all fourth-grade students across the country and their families with free admission to national parks and other federal lands and waters for a year, the White House said. The program begins with the 2015-2016 school year, marking the 100th anniversary of the National Park Service next year. 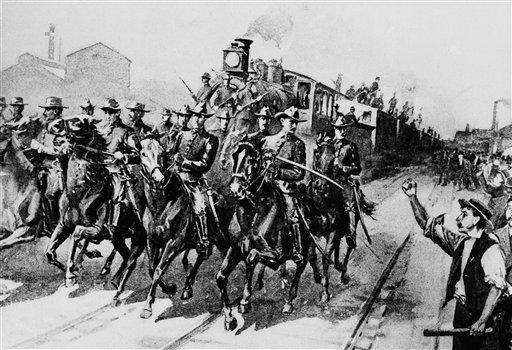 The White House said the three new monuments "help tell the story of significant events in American history and protect unique natural resources for the benefit of all Americans."

The new monuments will bring to 16 the number of national monuments Obama has created under the 1906 Antiquities Act, which grants presidents broad authority to protect historic or ecologically significant sites without congressional approval.

Some Republicans have complained that Obama has abused his authority, and they renewed their complaints over the new designations, especially the Colorado site, the largest in size by far among the three new monuments.

Obama should "cut it out," said Rep. Ken Buck, R-Colo. "He is not king. No more acting like King Barack."

Rep. Doug Lamborn, R-Colo., said he was outraged by what he called "a top-down, big-government land grab by the president that disenfranchises the concerned citizens in the Browns Canyon region" in central Colorado, about 140 miles southwest of Denver.

"As Chicago's first national park, Pullman's 135 years of civil rights and industrial history will be protected and enjoyed for generations to come," Kirk said in a statement. "This new national park will breathe new economic life into this community, bringing up to 30,000 visitors and more than $40 million each year."

— Matthew Daly of The Associated Press contributed to this report.