Today I chat with Lydia Netzer, the author of Shine Shine Shine. Reviewers have passionately praised Netzer's debut novel for its sci-fi love story: the book follows the relationship of Sunny, a congenitally bald woman, and Maxon, a robotic space engineer, as they find their own version of normal both at home and up among the stars. The novel's blend of folksy and futuristic is like a bacon muffin: shocking, yet somehow it all makes perfect sense. 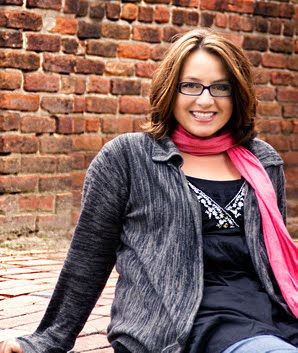 One of the things I identified with most in your book was the somewhat mystical/alien nature of pregnancy. What was the weirdest part of being pregnant for you?
Feeling the baby move for the first time was terrifying. The reality of having created a life form within myself which was separate from me and controlled by a brain other than mine really freaked me out. If I think about it too much now, I still get unsettled.. I mean, imagine if you had a worm inside you that was going to grow by a factor of like a thousand, and then bust its way out the nearest available hole and go found a corporation.. Yet our reaction is supposed to be to coo and crochet a hat.

The following two questions will take you through some high-highs and low-lows. Your book has elicited some really positive reviews. What were some of the best compliments people have paid to your book?
The best compliments I have received were supportive messages from parents of children with autism, or wives of men with Aspberger’s Syndrome. I wrote my book including characters with these traits, but I did not not make it a central point of the book. I was concerned I would be seen by people who live with these disorders as having been dismissive, or trivializing the troubles they experience. That doesn’t seem to be the case, and that’s very rewarding to hear.

Now: What were some of the meanest critiques you received on your piece about a successful marriage?
I think the best one was the woman who was like, “Fifteen years? That’s nothing! Try again when you get to 30, like me!” And I mean, there’s no response to that, except to say, yes, you’re right. Thirty is certainly a larger number than 15. It doesn’t really bother me — in fact, I’ve had as much fun with the one-star reviews of my book as the five-star. The person on Goodreads who trumpeted, “Shine Shine Shine? This book is crap crap crap!” made me laugh ‘til I cried. I mean, you have to laugh. You can’t take anything so seriously.

So many depictions of marriage in pop culture paint it as a drag. What are some examples of marriages — either fictional or real — that seem sexy and fun?
I always really loved the Bartletts on the show The West Wing. They always had a twinkle in their eyes with each other, even when they fought. I like the Obamas, too. I really love seeing couples that kid around with each other without crossing a certain line of respect. The difference between the marriage on Everybody Loves Raymond, which I found depressing, and the marriage on Roseanne, which I found fun, was that strangely, Roseanne and Dan actually never really crossed that “teasing” line into insulting. Of course, I like April and Andy on Parks and Recreation. And I love Pam and Jim on The Office.

What are some of your favorite examples of books or movies that successfully combine sci-fi and romance?
I’m reading a book right now called The Infinite Tides by Christian Kiefer. While it’s not really a romance, I think it really gorgeously combines sci-fi elements with contemporary literary fiction, so it’s a compelling statement about fatherhood, marriage and identity, and it still has astronauts, space walks, math and rockets. One movie I really love is Contact, which is about a straight-laced, scientific-minded woman falling for a woo-woo theologian dude, all in the framework of alien contact and extraterrestrial machines.

What’s one of the biggest differences so far, between Shine Shine Shine and its follow-up?
The new book has no robots. Which is sad, but if I put robots in every book, people would start to think I had an unnatural affection for them. Which I totally don’t. Really.

What did you learn from writing and publishing Shine Shine Shine that has helped you in approaching the second book?
Readers have responded so positively to the elements in Shine Shine Shine that I thought would be the most strange and inaccessible: the meditations on A.I., the weird death/hallucination/memory scene, the spacewalk encounter, etc. I really feel, after having people connect with and love those elements, that I have permission to let myself write what I really want to write, and not edit my imagination to the things I think will be palatable for a wide audience. I think the wide audience has more willingness to engage in strangeness than I had given them credit for.

You give lots of helpful writing advice online: Whose writing advice has helped you?
I often use Write or Die, which is writing software that begins to blink, beep, flash and shout at you if you stop writing for more than three seconds. I also am addicted to National Novel Writing Month, which encourages mad drafting, no editing and buckets of output in a short time.

You’re making the book club circuit: for those new to that world, how would you advise authors on how to best prepare for these appearances?
Engage as a member of the club as much as possible, and as The Visiting Professional Author Lady as little as possible. Be a friend, be a nice person, be a good addition to the group. Listen.

You homeschool your kids. What are some of the biggest misconceptions of homeschooling you encounter, either regarding the parents or the kids?
That homeschoolers are isolated. I mean there are stereotypes about homeschoolers being religious nutburgers or hippies or anarchists. . .  but those are pretty much dissipating nowadays as homeschooling becomes more mainstream. What people still really don’t understand is how much interaction these kids get — karate school, horse barns, violin academy, homeschool co-op, church — and that’s not even counting the intentional socializing that homeschoolers do at park days, dances, play dates, field trips, etc. If there’s one misconception that I wish I could explode, it would be that homeschooling is lonely. We actually have to work to *limit* the kids’ social calendar, so it doesn’t start taking over our lives.

Who are some of your favorite famous baldies?
I loved Natalie Portman bald. She’s my very favorite Also Sigourney Weaver bald. I’d love to see Claire Danes bald! Demi Moore and Britney Spears, not so much. In terms of boys, Bruce Willis, definitely. Dostoevsky, obvs.

How does it feel to be the 324th person interviewed for Zulkey.com?
It’s a dream come true. Thank you so much for having me! You’re a peach, and all my love for your new baby!

Lydia Netzer lives in Virginia, where she homeschools her kids, writes wonderfully about writing and runs this Twitter account. Click here to read an extended interview with Netzer.