A five-day visit to New York.  Six shows, half good and half not-so.  Three museums.  Some of this is utterly evanescent; some will come to Chicago if you're patient; but some of it requires you to jump on a plane and go.  Herewith a guide to your trip.

Pippin at the Music Box.  There are plenty of people whose first response to the revival of Pippin was, "Oh, I hate that show!" but I've always loved it.  (No one is neutral.)   The Broadway revival, faced with the challenge of eradicating otherwise ineradicable memories of Ben Vereen doing Bob Fosse's dances, makes two major changes to the original: Vereen's role is played by a woman (the excellent Patina Miller), and much of Fosse's athletic choreography gives way to actual acrobatics created by circus artist Gypsy Snider, including tumbling, trapeze, contortionism and human pyramids.  This makes wonderful thematic sense, as the titular character spends the entire show seeking thrills.  With superb performances by all concerned (a special nod to almost-certain-Tony-winner Andrea Martin as Pippin's remarkably nimble grandmother), director Diana Paulus's production should satisfy novices and Pippin cultists alike.  Most likely it will play on Broadway until we're all as old as Granny, but the producers have just announced that it will begin a national tour in Denver in a few months.  Presumably Chicago will either be one of the subsequent stops or will get a sit-down production of its own--in which case all those hours local performers spend on trampolines at the Actors' Gym will finally come in handy. Magic to do, indeed.  Open run. 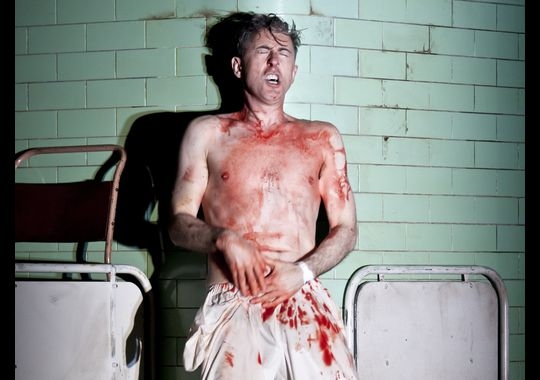 What to see if you can get there before July 14:

What you hope you'll get a chance to see:

On Your Toes at City Center.  The Encores! series unearths little-done musicals and revives them for 5-day runs.  Ostensibly, these are staged readings, whose actors have book in hand; but at least for this production it's accent on the "staged."  In fact, the production was fully choreographed, by director Warren Carlyle in the first act and by George Balanchine in the second, and danced with precision by a company including principals of the New York City Ballet as well as musical comedy actors.  Rogers and Hart's 1936 musical concerns a tap-dancing music teacher, an unappreciated composer, and their efforts to put up a show called "Slaughter on Tenth Avenue," a show which consists of Balanchine's jazz-inflected ballet about a gangster and a chorus girl named Lola.  (Is that where Barry Manilow got the idea?)  The ballet moved from Broadway into the classical dance canon and has never moved back, til now.  It's a perfect coda to the musical, and makes a marvelous contrast with the Act I finale, a send-up of modern dancing crossed with baggy-pants pratfalls which had the audience gasping with laughter.  As the dance diva from hell via Russia, ballerina Irina Dvorovenko shows a real gift for comedy as well as flawless ballet chops.  Yes, it's cruel to describe such a marvelous show and then point out that it can't be seen anywhere; but Encores! productions have occasionally led to full-scale revivals, and On Your Toes certainly deserves to join that storied group.  Closed, but not forgotten: perhaps it will do a pre-Broadway tryout in Chicago.

What not to bother with:

Nikolai and the Others at Lincoln Center.  I went to see Richard Nelson's play, though I'm not a fan of his historical dramas, because it was  directed by Chicago's David Cromer, whose production of Our Town here and in New York was considered so revelatory.  But there's nothing Cromer or any other director could do with this text, whose central conceit is that George Balanchine, Igor Stravinsky and a dozen other Russian emigres meet for a weekend in the country while Messrs. B. and S. are working on "The Firebird."  They've all worked together or been married to one another or both, and one of them is wheezing so hard you know he's the Act I loaded gun which must go off in Act II.  But adherence to Chekhov's law of stagecraft and minute attention to boring Russians aren't enough to turn this into Chekhov.  We start off not knowing or caring about these people and end up the same way, even as they create what we know is a lasting work of art.  The best moments come from the two New York City Ballet dancers whose rehearsals of "Firebird" convey the excitement of creation.  The rest of the play just lies there like cold blini.  I did, however, enjoy hearing the characters rag Balanchine about choreographing for Broadway ("Of course, that's where the money is"), knowing they're inveighing against "Slaughter on Tenth Avenue."  Through June 16.

The Big Knife at the Roundabout's American Airlines Theater.  This late Clifford Odets work is a naked piece of autobiographical special pleading, in which Odets portrays Hollywood as a monster destroying the morals and lives of otherwise good men.  No doubt that's what it felt like to him as he spent years out there producing not too much and drinking himself to death; but, as a friend once said about Arthur Miller's equally autobiographical After The Fall, "Why should I pay to listen to his therapy?  He should pay me!"  Portraying a movie star whose guilty secret keeps him in thrall to the studio, Bobby Cannavale gets nothing to do but whine, though he can be an exciting performer who holds his own with Steve Buscemi and Michael Shannon on tv's Boardwalk Empire.  But neither his character's secret nor the struggle with his conscience engages the audience in the slightest, and by the time he too submits to Chekhov's law we're wondering why the homesick playwright didn't just go home.  Through June 2.

The Nance at the Lyceum.  Less a play than a showcase for Nathan Lane, Douglas Carter Beane's play concerns a performer in the twilight of burlesque whose specialty is "pansy," exaggerated effeminacy shot through with double-entendres about homosexuality.  Despite its fidelity to original routines from vaudeville (Ever wondered about that Three Stooges "Niagara Falls" bit?  Or Austin Powers's "Oh, be-have!"?), the play is full of anachronisms, importing a Stonewall consciousness into the New Deal.  Lane's thoroughly unpleasant character, a self-hating Republican gay man named Chauncey Miles, stands up for his right to perform "pansy" in a courtroom sequence straight out of Philadelphia.  The lover he meets in a demi-monde automat (the charming Jonni Orsini) is completely at ease with his own gay identity and just wants to settle down and play house with Chauncey.  Then one character wonders aloud, "In 80 years, who's going to be wondering how to pay for Social Security?"  (Big laugh.)  Beane succumbs repeatedly to the temptation to comment on his characters, so we never for a minute mistake them for actual people.  Lane may well get a Tony (though go, Tracy Letts!) but even his skill can't save The Nance.  Open run.

Of museums I can report:

The photography/video exhibit, "Street" by James Nares, at first appears to be a simple pan by a video camera across still photos of outdoor spaces in New York.  Gradually, though, you realize the photos aren't still--they're slow-motion, taken with the kind of camera used to capture images of hummingbirds in flight.  For more than an hour you sit watching the continuous pan across crowd after crowd, with people flicking cigarettes and kissing and picking their noses and crossing the street, all verrrrrrrry slowwwwwwly, and it's utterly mesmerizing, especially as set to music by Thurston Moore of Sonic Youth.  The main exhibit is flanked by stills Nares found influential, and they include both motion-capture nature photography and shots of New York streets by Steichen and Steiglitz and Strand.  More cruelty: the exhibit closes this weekend and there are no plans to re-open it anywhere else; but there's a video clip on the artist's site.

"Impressionism, Fashion and Modernity" is an assemblage of Impressionist paintings featuring people in fancy clothes.  That sounds like an artificial basis for an exhibit but in fact the highly intelligent wall commentary explains how the portraits helped create and then chronicle the fin-de-[19th]-siecle Parisian middle class.  Manet, Courbet and Degas paintings stand next to the original dresses in which their models were clothed.  One entire room is dedicated to the significance of white gowns, another to black, and several rooms display the dandification of men that went hand-in-glove with widespread prosperity.  It's an illuminating as well as beautiful exhibit which closes this weekend in New York and reopens June 26 at the Art Institute, where it will run through September 22.