Skipping work to go to a Cubs day game is one of the most iconic traditions of Chicago sports fandom. So with the Ryder Cup just a tantilizing Metra ride away, I decided to attempt to give the World Cup of golf the "Bleacher Bums" treatment.

I actually thought the Ryder Cup was a sailing event when I first heard it mentioned a few weeks back.

Would it be possible to spend an enjoyable day at the Ryder Cup knowing nothing about golf and without spending more than $100? I honestly had no idea.

But- the weather has been beautiful this week and the Metra makes it really convenient to get to Medinah. Plus I found some tickets to the final day of practice rounds going on StubHub for $29.

If it were the Olympics I'd definitely pay that much to see a handball match- and this is the closest thing Chicago is likely to see to the Olympics in my lifetime.

One of my few experiences with golf involved being turned away from a driving range with my grandfather for wearing jeans and sneakers. This morning I made sure that wouldn't keep me out of the Ryder Cup, dressing in a blazer, slacks and dress shoes.

I caught the 10:30 Metra from Union Station to Medinah and already could tell I'd overdressed. The average passenger wore what I'd call "expensive casual" clothes, but at the entrance gates people in less-than-neat jeans and sneakers got in with no questions.

Goodbye preconceived notion- golf tournaments aren't as stodgy as you think they might be. 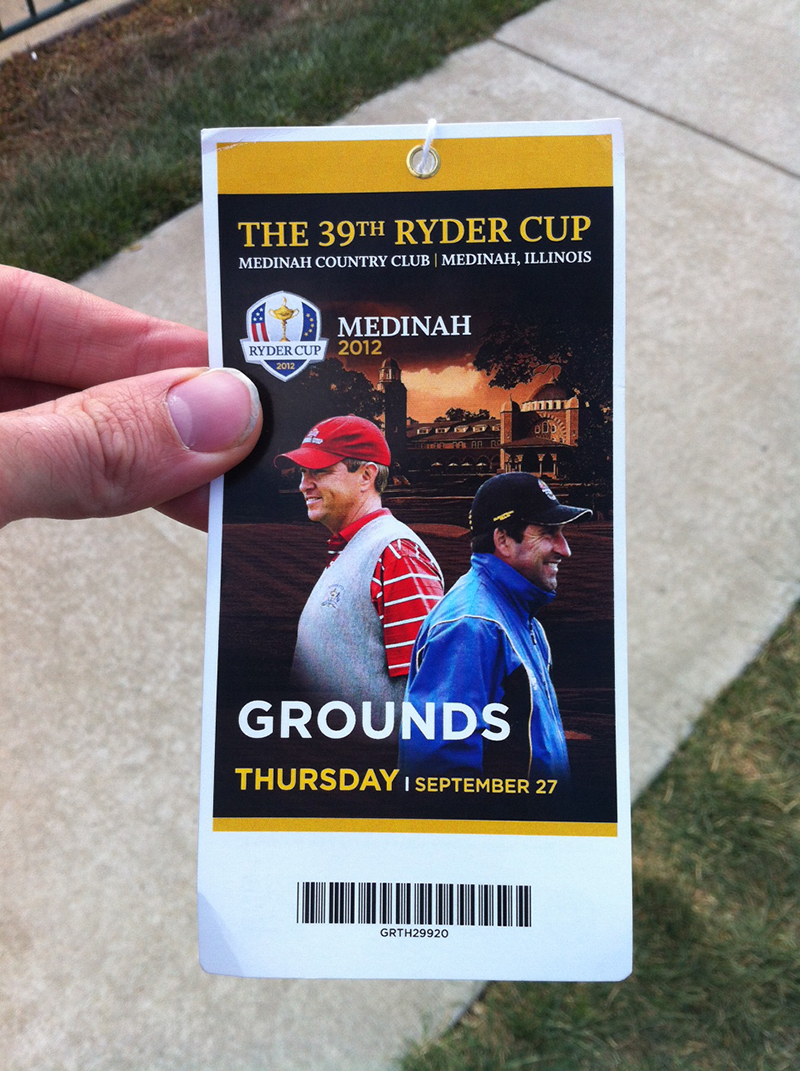 I didn't actually buy one of the $29 tickets I saw on StubHub. I wanted to see if there would be the usual crowd of ticket scalpers milling around just outside the gates. Sure enough, as soon as I exited the Metra in Medinah I overheard a fellow passenger talking about the tickets he'd just purchased. He pointed me toward the right guy and $29 later I was in possession of a "Grounds" pass. The scalper had attempted to sell me a "Pavillion" pass for $60 with promises of nicer food and televisions, but I wanted to match the StubHub price, so I talked him into the general admission-style ticket for $29. 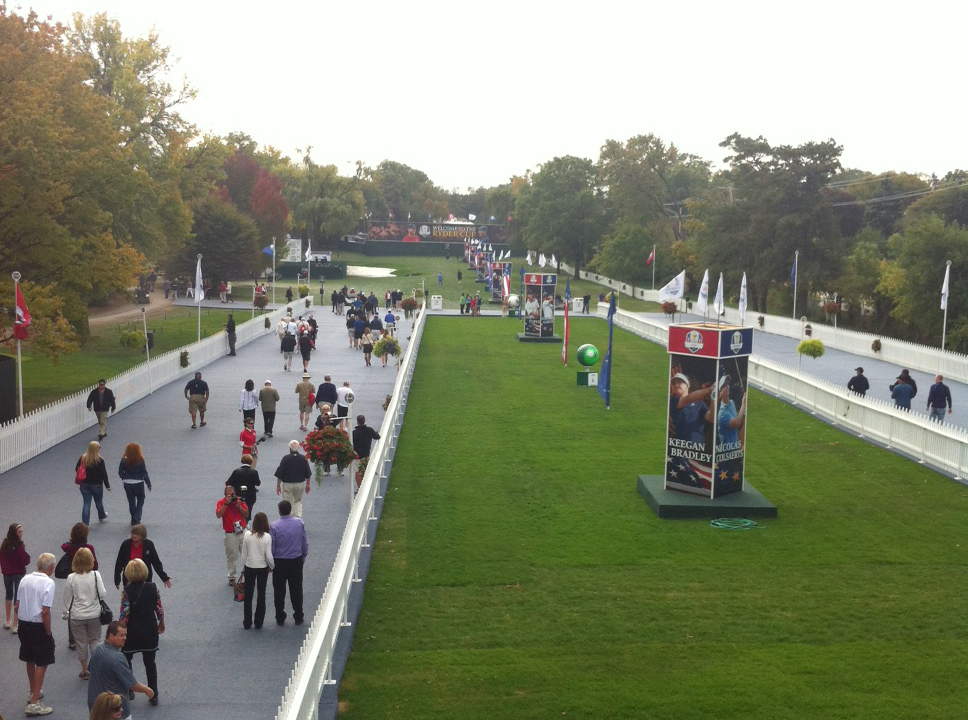 After a short walk past a wide variety of inventive capitalism schemes (kids selling cupcakes and water bottles, Chicago-based food trucks, Medinah residents renting out their driveways as parking spots), I came upon the main entrance. I was promptly told my backpack wasn't allowed inside, so I used their free bag check service. A few swipes of the metal detector wand and a bar code scan of my ticket later and I was inside.

It was around this time I decided that today was more like skipping work to go to Six Flags than watching the Cubs at Wrigley. First of all, at a golf tournament walking around is the name of the game. There's no one center of activity; like a theme park small attractions reward a leisurely stroll. Crowds ebb and flow and even if you don't know where they're headed, it usually works to give in to the herd mentality. They'll usually lead you to something kind of interesting. Someone once said "Golf is a good walk spoiled," but when you're spectating and not playing there's no danger of that.

Still, if the Ryder Cup is just about walking around in the woods is it worth my $29? I pondered this thought around noon as I made my way towards the stage where the Opening Ceremonies were held later that day. A man was onstage rehearsing and he'd just introduced someone. Who? Oh just Justin Timberlake, Ryder Cup U.S. Ambassador. Suddenly my $29 investment felt like a bargain again.

There was no dancing or singing, but JT did a pretty good recitation of a poem called "Golf" accompanied by a Chicago youth orchestra. Afterward, as he waited onstage for his next cue, one fan yelled "Justin!" but other than that and a few cell phone cameras, no one made too much of a fuss.

A few hours later, after I'd actually watched some golf being played, there was a veritable fan frenzy over Rory McIlroy. One of the main attractions of the practice days appears to be the chance to get autographs from golfers who are usually inaccessible. Kids and adults alike screamed "Rory! Rory! Over here!" as McIlroy exited the 18th green. He obliged by spending a few minutes signing flags and golf balls. Later, team U.S. rookie Jason Dufner outdid McIlroy by signing every last item fans shoved at him- even as grounds crews tried to usher him away. 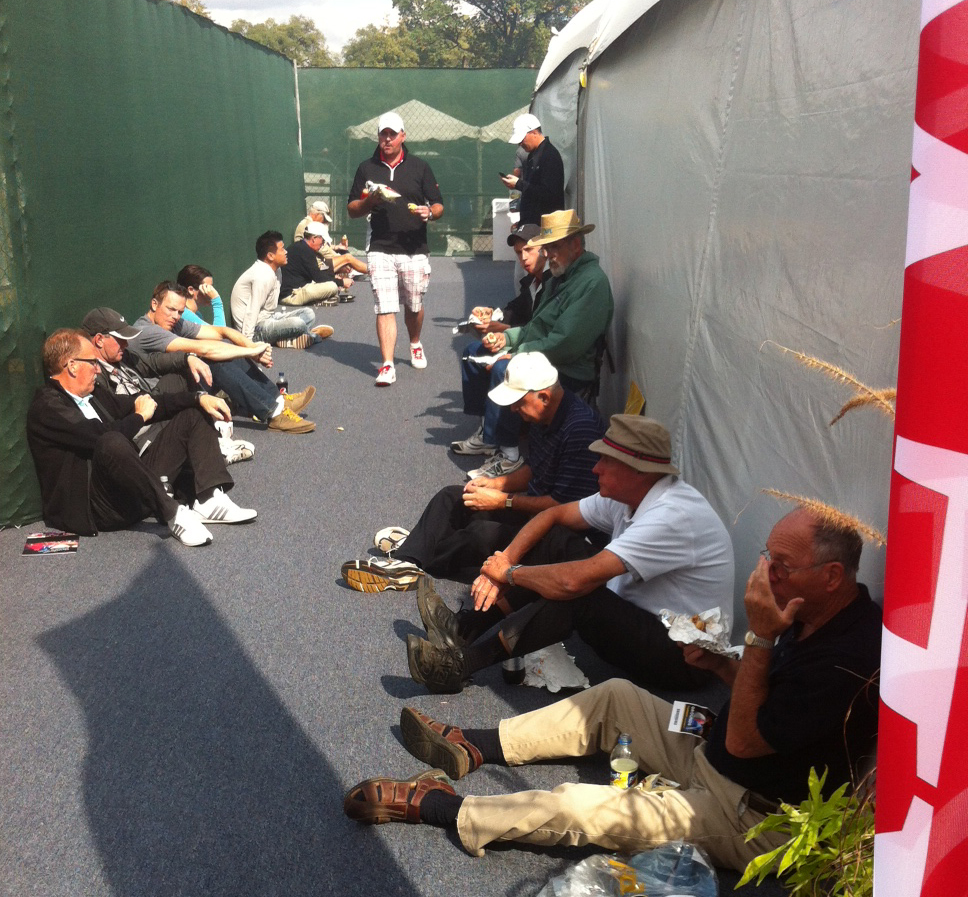 What makes a stroll around a golf course even more pleasurable than not playing golf? Drinking alcohol! The centrality of booze is one thing the Ryder Cup and Wrigley Field have in common. The Friendly Confines are notorious for $8 Old Styles, but surprisingly beer at the Ryder Cup was far cheaper- $5.50 for domestics and $6 for Stella Artois. That's comparable to any number of Lakeview bars any night of the week.

Of course, being an upstanding blogger I didn't partake- instead opting for Gatorade with a grilled chicken sandwich. At only $13.50, I probably would have paid more at Wrigley or Six Flags.

While I'm no closer to being a golf fan, I did have a nice day for far less money than I thought I'd have to spend.

Unfortunately, tickets for the actual tournament- Friday, Saturday and Sunday- will be far more expensive. Expect to pay at least $200 if you go one of those days.