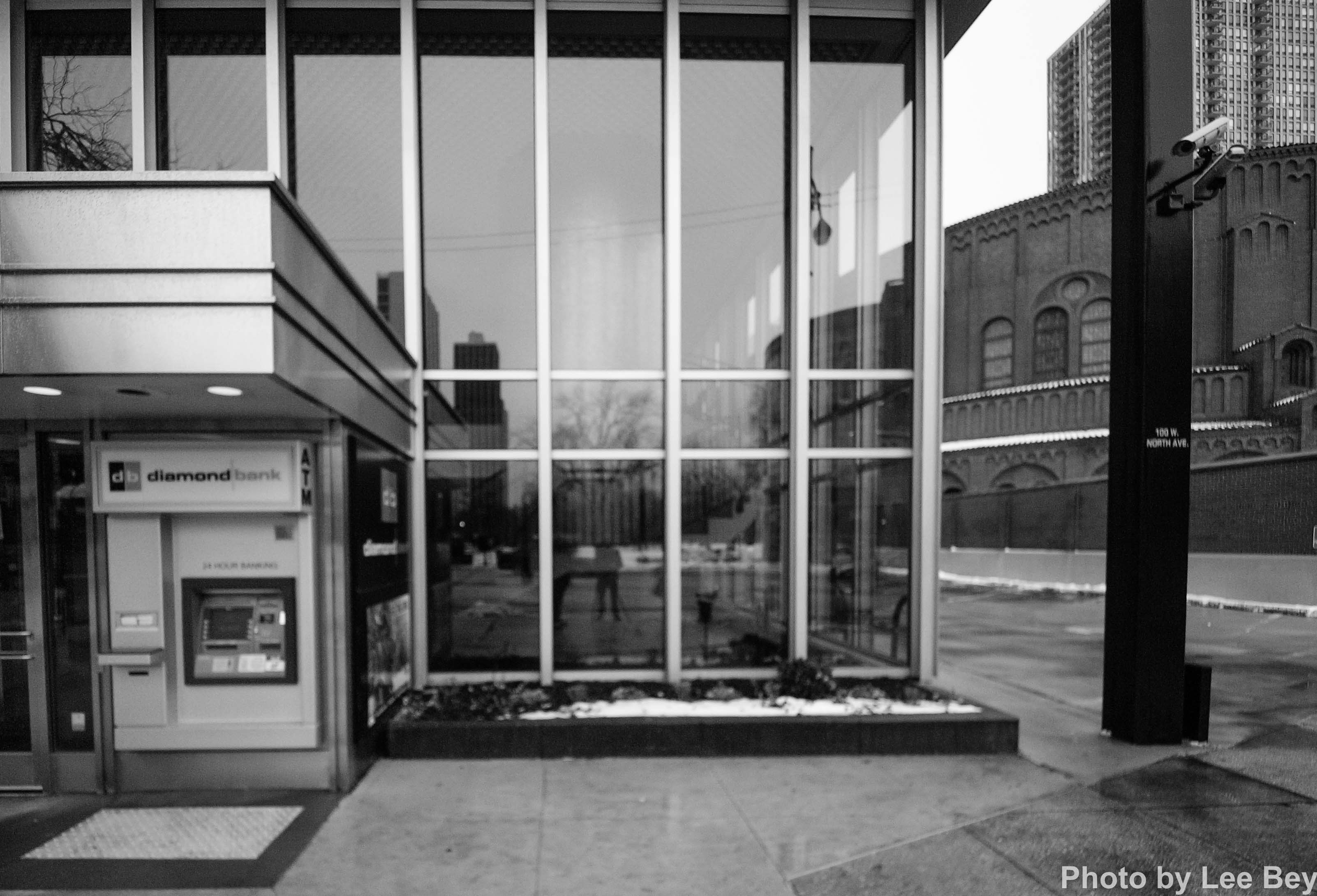 I'd passed the corner of Clark and North countless times without noticing--really noticing--the Diamond Bank building on the intersection's northwest corner.
Built in 1961 as North Federal Savings & Loan, the two-story modernist building is visually overshadowed by the huge, Byzantine-styled Moody Church just to the north. But as I discovered last week, the glassy, transparent and well-kept bank building is worth a look--inside and out.
The building was designed by Naess & Murphy on the heels of the firm's better-known works such the Prudential Building and the former Sun-Times Building, 401 N. Wabash. While those buildings read as updated pre-World War II structures, North Federal was full-on modernism,with a glass curtain wall wrapping around the long rectangular structure and exposed exterior columns creating an unobstructed banking floor inside.
By the 1960s, Naess & Murphy would become C.F. Murphy Associates, a modernist powerhouse with work that includes the stellar CNA Building at Jackson and Wabash, McCormick Place's Lakeside Center, the Daley Center and more.  North Federal is a small, but noteworthy step in the firm's evolution. 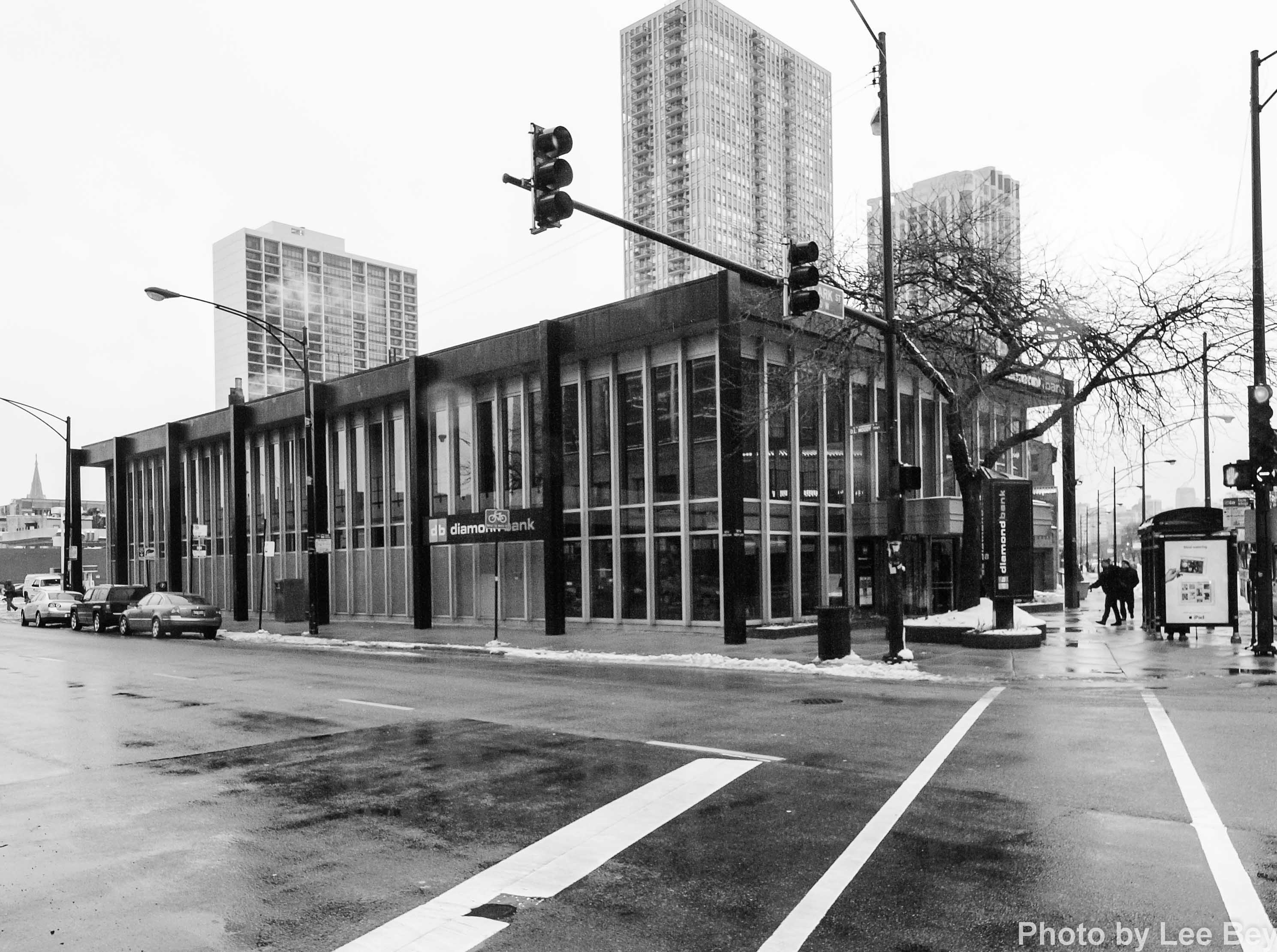 The building's design phase began in 1959, according to the city's landmark commission's report on the bank. The report also said the look was influenced by Manhattan's Manufacturers Trust bank building, designed by Gordon Bunshaft of SOM. Agreed, but Bunshaft's columns are inside the curtain wall, allowing the box to read a bit purer.
Diamond Bank looks good on the inside as well. The interior's decor has been updated, but the midcentury bones, spirit and layout are still evident. Praise the bank for not cluttering up this view with window signs: 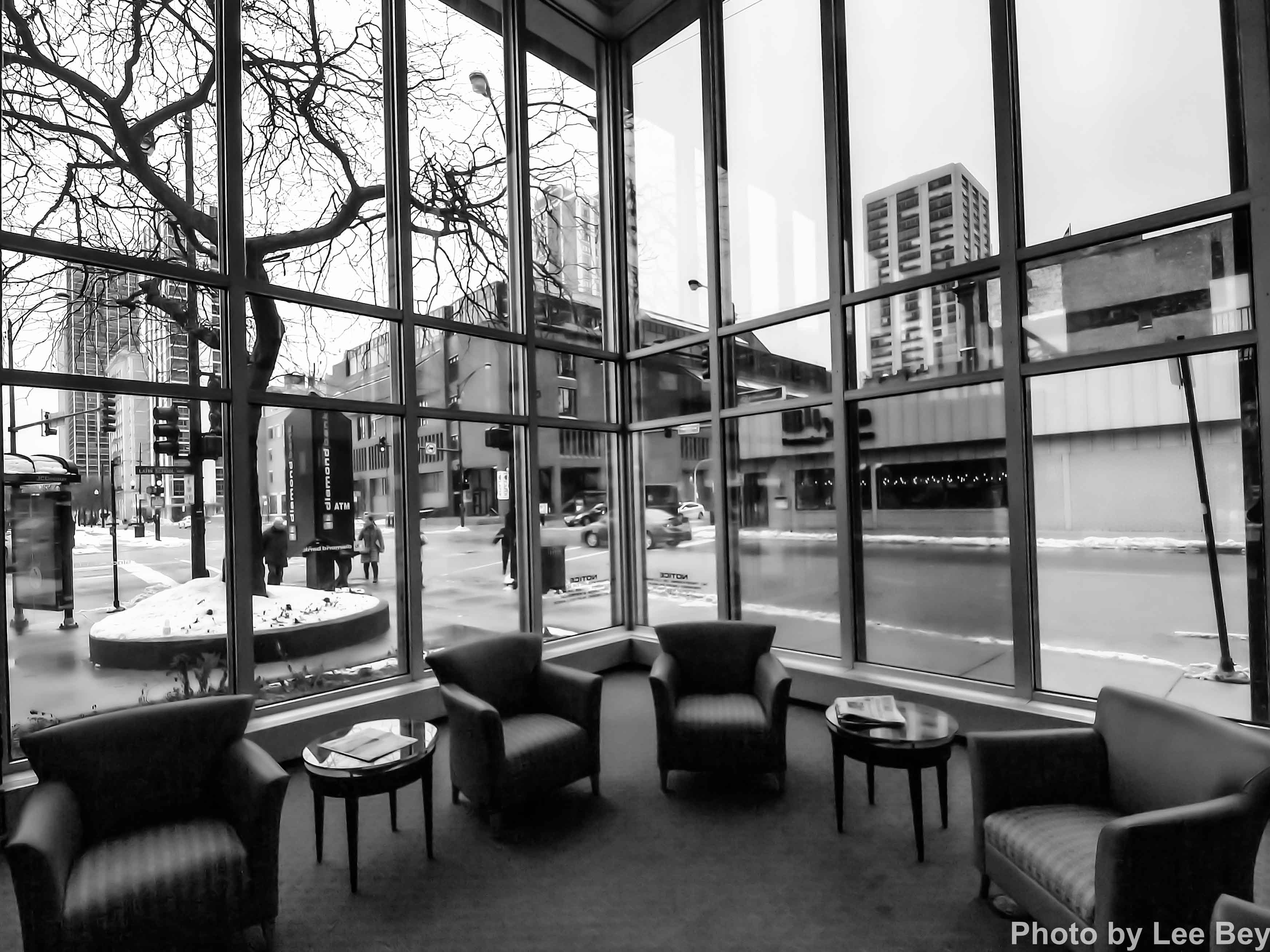 ...and for keeping this ceiling of suspended light diffusers, which also have a sculptural effect: 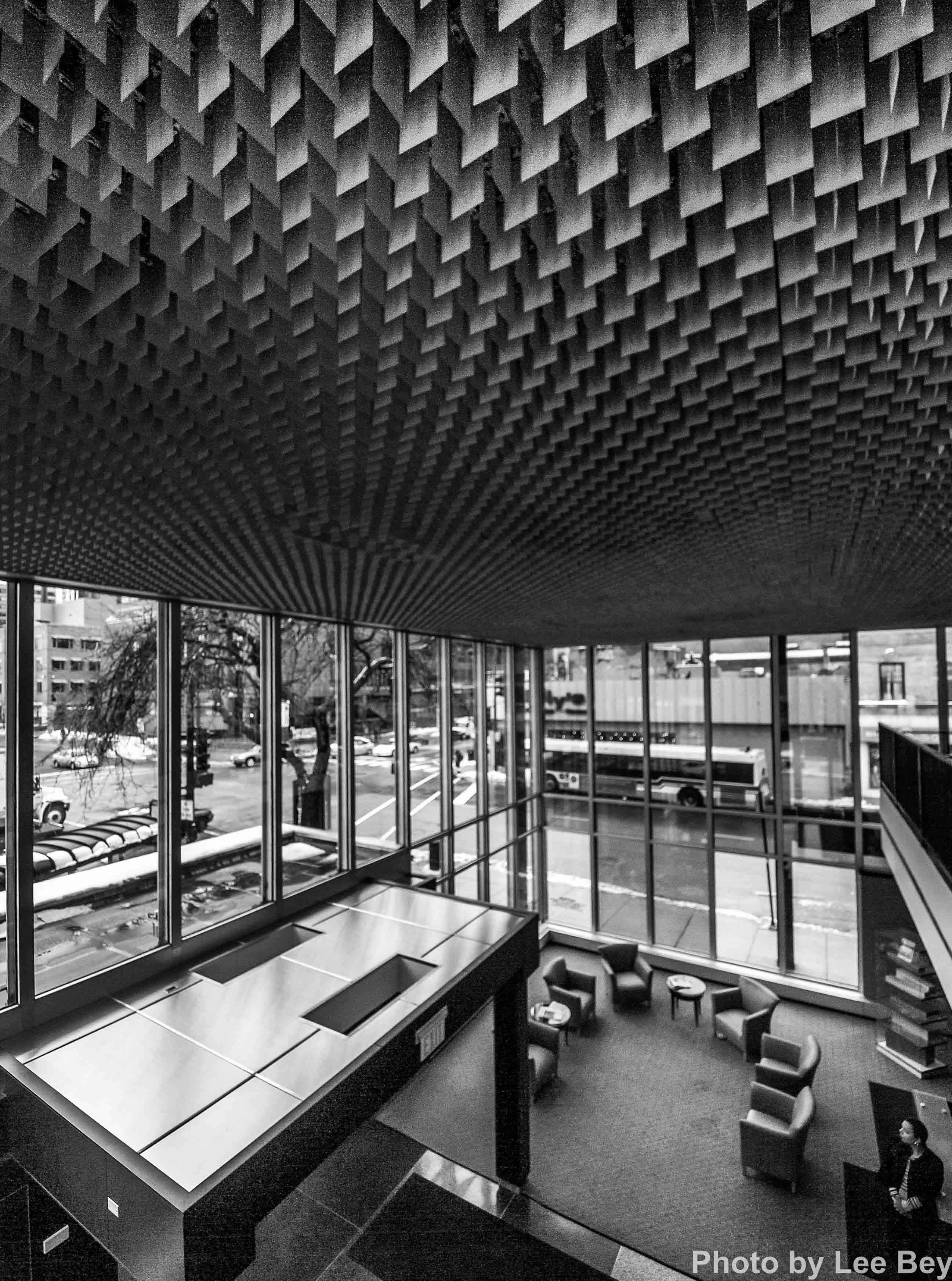 A staircase wraps around an exposed elevator core--that is covered in gold ceramic tile. That terrazo floor is pretty cool, too. 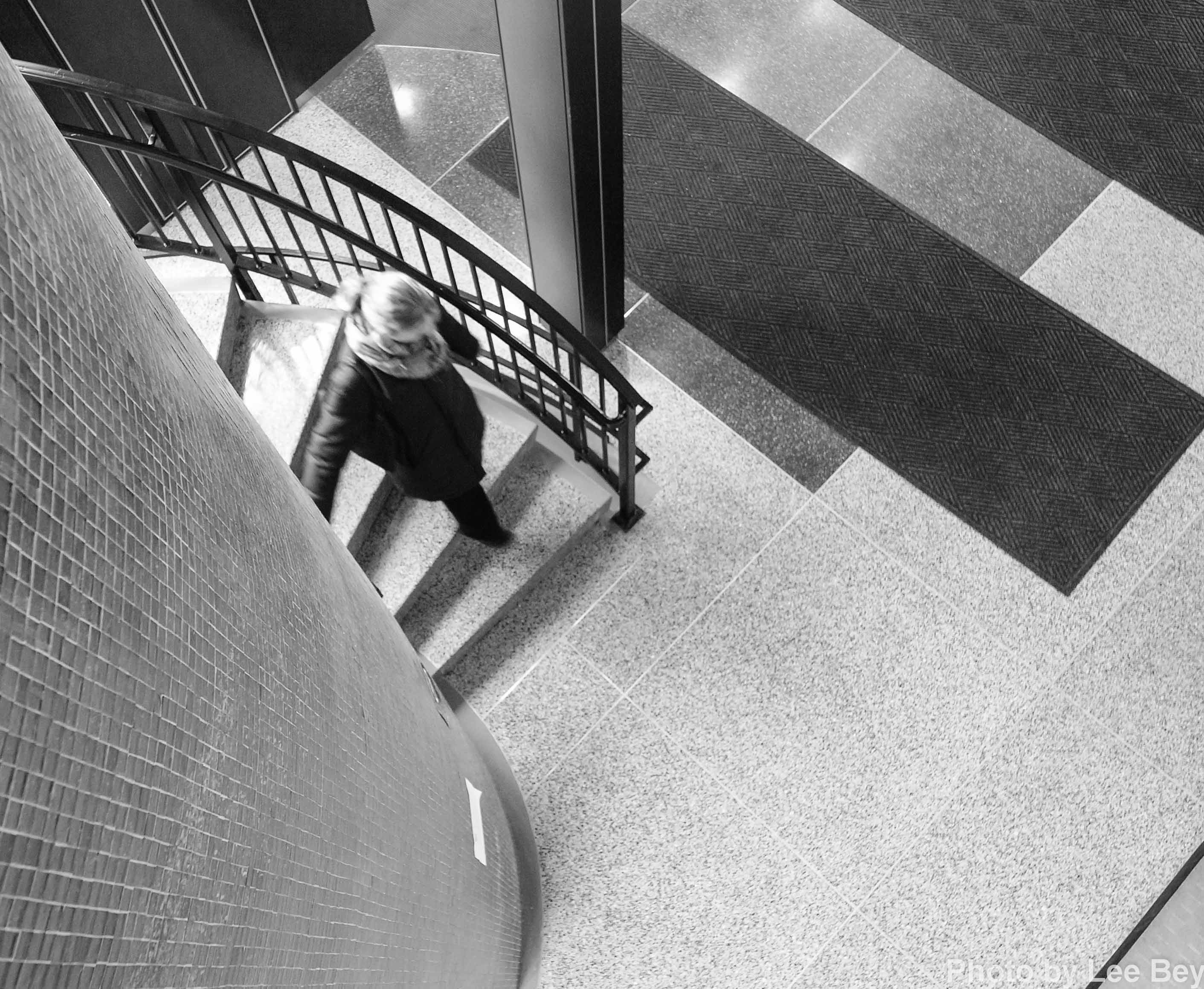 Diamond Bank had been considered for landmark status a few years ago as part of a designation honoring neighborhood bank buildings. But the building was denied because it was the only midcentury building in the proposed designation.

Architect Mits Otsuji designed the bank while at Naess & Murphy, according to Vince Michael, architecture historian and executive director of the Global Heritage Fund.  As for C.F. Murphy, the firm became Murphy/Jahn and now, Jahn.