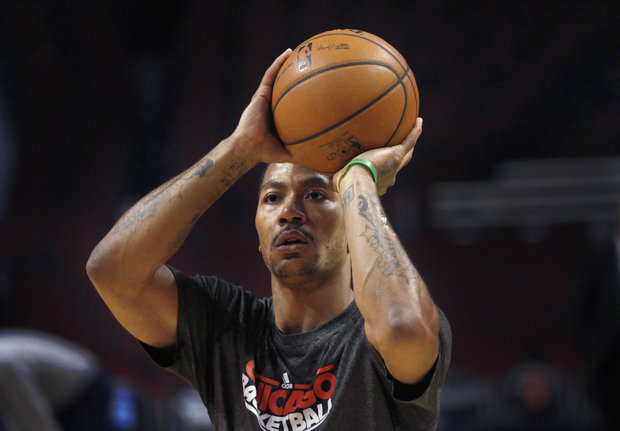 Tonight is game 41 of the Bulls schedule, exactly half way through the season. You are missed and everyone can't wait for your return (soon, right?). Despite many skeptics, you will be coming back to a team that has fared pretty well so far.

Here is why they are 24-16 and in a playoff spot in the Eastern Conference:

- The front court has three players that are playing at All-Star capability. Last year's All-Star, Luol Deng, has been playing a ton of minutes (not surprising) and does all the little things: defending the top scorers, forcing turnovers and averaging 17 points a game. Deng injured his hamstring and has been out for two games. Joakim Noah has been the engine of this team, he should get a spot on the All-Star team (some bloggers are even promoting it). Noah is playing big time minutes. He has added offense to a game that has been good on defense. His passes and free throw shooting have improved. Both Noah and Carlos Boozer are the only two teammates in the NBA that are averaging double-digits in points and rebounds for the season. Boozer, in fact, leads the Eastern Conference with 23 double-double games. The surge for the former All-Star Boozer has been what the front office has been waiting for since he signed. He even took Eastern Conference "Player of the Week" honors just the other day.

-Your position at point guard has been a bit of a yo-yo, no one can replace you, and it is a matter of just filling the spot until your much anticipated return. The effort of Kirk Hinrich is there; unfortunately his body has been racked with injuries.When he does play, Hinrich contributes in defense and running the offense. He has been limited in scoring and that is where first year Bull Nate Robinson picks up some of the slack. Robinson is a loose cannon and can be a spark or an overloaded circuit. If the Bulls are down, Nate can help with some instant offense. But there are times when he plays out of control or doesn't get into the offense fast enough. Rookie Marquis Teague, 19, has a long way to go. There were some moments where he played well with his minutes. Lately, he has been lost on defense and teams have taken advantage of that weakness.

-Your running partner in the starting backcourt, Richard Hamilton, has had difficulty with injuries again. This time it's his foot, he has missed time with fasciitis. Hamilton remains an effective player with the "pick and roll" during the precious minutes on the court.

-Of course when you return Derrick, the bench has been revamped, except for Taj Gibson and Jimmy Butler. Gibson inked a new contract and it seemed to affect his play. Now he seems to be back on track. Last season Taj and Omer Asik were such a great front court tandem off the bench. Asik is playing well as a starting center for Houston. New Bulls center Nazr Mohammed has not had an impact and has been used sparingly off the bench. Butler has developed more this season, last year he was hampered because of the NBA lock-out. This summer he was able to work out with the team, played in the summer league and had the benefit of a full training camp. Coach Thibodeau now trusts Butler with solid minutes off the bench, especially on defense. While Luol Deng nurses a sore hamstring, Butler has been the starting small forward and has been productive. He did an outstanding job on Kobe Bryant. His teammates called him the "Kobe Stopper" in the locker room. Marco Belinelli found it hard at first to fit the “Thibs” system (defense will get you on the court). He has improved. Daequan Cook recently joined the team after being released by Houston and no one seems to know exactly why Vladimir Radmanovic is even wearing a Bulls jersey.

-There are a few puzzling problems for this Bulls team. There have been some bad losses: Charlotte, Phoenix and twice to Milwaukee at home. Yet on the road it has been a different story: beating Miami, New York and Boston.

-Tom Thibodeau is coaching his butt off and was rewarded with a four year contract extension. His philosophy of hard work and a tenacious defense is still his trademark. Some of the new players are slowly but surely buying into this system.

-There is no doubt that your coach and your teammates can’t wait to see you back on the floor. Thibodeau has indicated that you have started practicing with some contact. That could mean only one thing, Derrick: you are nearing a time to play for real. Your work outs before games on the court have been dialed up. The intensity is starting to appear on your face. The fans are stacked up near the court as you and the Bulls coaching staff work on your shooting. When you do comeback, your minutes will be limited. There will be an adjustment period to get used to the front court that has been carrying the load. Everyone has been patient, but now they can’t wait for the Rose to bloom.

A more than a casual observer

P.S. It was nice seeing you greet your teammates at the locker room door after the win against the Lakers on Monday. The way you ran down the hallway to celebrate was pretty impressive.