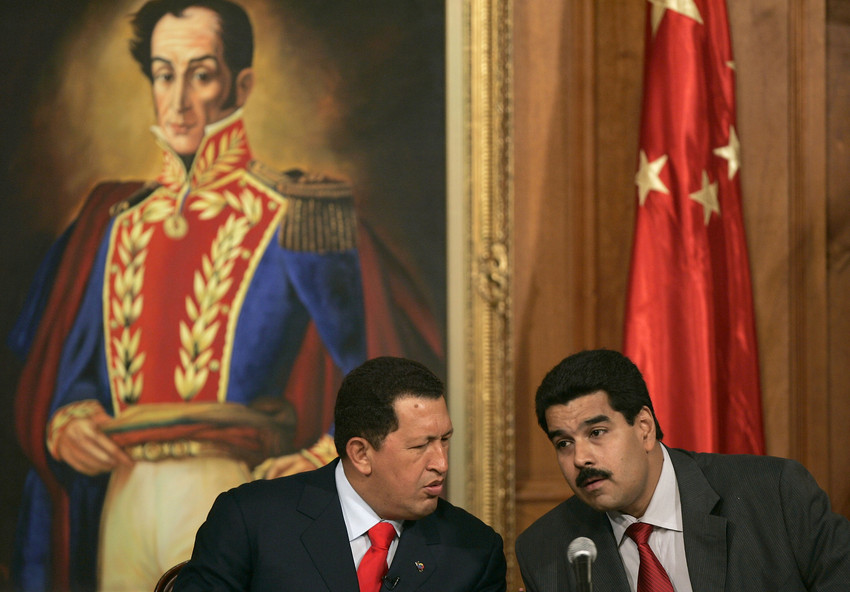 The last time Hugo Chávez appeared on Venezuelan TV was December 8, when he gave explicit instructions.

"If something should happen that I might be incapacitated in any way, I want Nicolás Maduro to finish my term, as the constitution dictates, but also -- and it’s my firm opinion, as clear as a full moon, irrevocable, absolute, total -- that if you’re obliged to hold new presidential elections, you should elect Nicolás Maduro as president,” he said, holding a copy of the constitution. “I’m asking this with all my heart.”

Two days later, Chávez boarded a plane to Havana and was never seen or heard from in public again. He was never even sworn in to his new presidential term, thanks to a ruling from the Venezuelan Supreme Court that said the new term was, essentially, a "continuation” of the old term. And though power was never officially transferred from Chávez, Maduro became the face of the government, the de facto president.

It was no surprise then that the news of Chávez’s death last Tuesday was delivered by a somber and clearly emotional Maduro, who also said there would be elections in 30 days.

Since then, it’s been almost a given that Maduro will be the standard bearer for Chávez’s party. He will very likely face Henrique Capriles, who came within 11 points of Chávez last fall as the opposition candidate (Capriles, though having come closer to unseating Chávez than any previous opponent, will likely enter this election weaker, as much from the wave of sympathy carrying Maduro as from the opposition’s internal divisions).

But here’s the thing: there’s a real question about whether Maduro should be interim president, and about his candidacy should he choose to run for president.

The 1999 Venezuelan Constitution’s Article 233 (in its original Spanish below) says this: "When there’s an absolute absence of the President or President-elect before the inauguration, a new election -- universal, direct, and by secret ballot -- shall take place within 30 days. During the time of the election and up to the inauguration of the new President, the Presidency of the Republic shall be held by the President of the National Assembly.”

The constitution provides for the ascendancy of the VP only after the president has been inaugurated.

In other words, because Chávez was never technically sworn in, it would not be Maduro the VP (and Foreign Minister) but Diosdado Cabello, the President of the National Assembly, who should be acting president. (Much was made by some of Cabello’s absence from the news conference announcing Chávez’s passing, but Cabello’s own mother had died Sunday, just two days before, and he was with family.)

Yesterday, Cabello announced a special Friday session of the National Assembly to swear in Maduro as the nation’s acting president and to call for elections within 30 days.

"President Chávez was in full control of the (presidency),” Cabello told Venezuelan TV, insisting, as everyone on Chávez’s team has for the past few months, that he, as President of the National Assembly, didn’t need to assume the presidency temporarily because there was no “absolute absence,” as the constitution calls for. “An absolute absence was never decreed. What the constitution calls for is that when there’s an incident such as this (death) within the first four years of a presidential term, the vice president of the Republic will assume the responsibility (of the presidency). And that’s what we’re going to do. That’s what the constitution says. We’re going to comply with President Chávez’s orders.”

Whether Chávez was actually in control up to the last minute is irrelevant at this point. But let’s say that, seeing that Chávez was already in power, not waiting to be sworn in, that a valid argument can be made for Maduro, as VP, to step in.

That leads us to another problem, Article 229 of the constitution (also in Spanish below): "Whomever is serving as Executive Vice President (Maduro’s actual title), Minister, Governor or Mayor on the day of the announcement of his or her candidacy, or at any moment between that date and the election, may not be elected President of the Republic.”

As the legal drama continued to unfold yesterday, Maduro had one other announcement: Chávez’s body will lie in state for seven days and then be embalmed for permanent display.

"The body of our leader will be embalmed, and it will ... be surrounded by crystal glass forever, present forever, and always with his people," he said.

The Venezuelan Supreme Court delivered an opinion Friday, March 8, before Maduro's swearing in as president later that night, that confirmed his promotion to Acting President and specifically exempted him from having to resign the office while a candidate for president. This means that Maduro will have all of the advantages of incumbency, including government-owned and government-controlled media (which has so far broadcast very little about the opposition) leading up to the Aprl 14 elections.