﻿In Illinois, the name Michael Madigan is synonymous with political power, and with good reason: He’s spent the past 45 years representing portions of Chicago’s Southwest Side. For 31 of the last 33 years he’s served as the Speaker of the Illinois House. And, as chairman of the Democratic Party of Illinois, he’s a political kingmaker, raising money and support for candidates he backs.

Little surprise, then, that even though Madigan is seeking the Democratic nomination in the 22nd House District next week, you’d hardly know it. Of the four challengers in that contest — Madigan and three contenders  — only one, Jason Gonzales, is actively campaigning.

During the run-up to Tuesday’s primary vote, one of Gonzales’ biggest hurdles is Madigan’s visual lead. If signs could vote, Madigan would be a shoo-in, as his yard signs are scattered across the district. 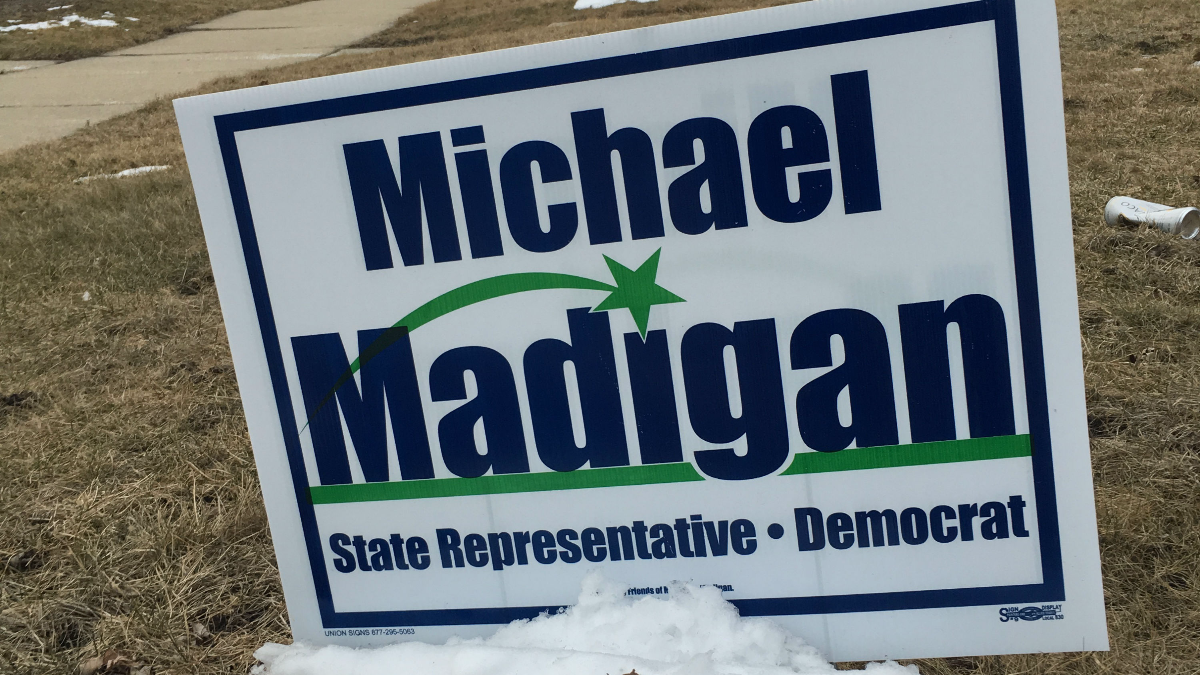 Michael Puente/WBEZ
One of the thousands of signs for Illinois House Speaker Mike Madigan in this 22nd House District. You’d be hard pressed to find a sign for another candidate in this district.


“Admittedly, in the beginning, I was intimidated by the sheer number of signs but when we actually went to talk to people at those doors, what we found is that many said they were undecided,” the 42-year-old Gonzales says. “They weren’t just going to vote for Madigan simply because a sign was in the yard.”

Latino and Spanish-speaking, Gonzales feels emboldened by demographic changes in the district. In 2000 the district was majority white and 40 percent Latino. Today, it’s 70 percent Latino. He’s also not fazed by the fact Madigan’s been re-elected time again during that period0.

Again, Gonzales is the only candidate of the four making much noise about the race.

Two candidates — Graciela Rodriguez and Joe Barboza — seem practically invisible and there’s no indication that either are campaigning. Their yard signs are scarce, if non-existent. This reporter spotted none while reporting on the primary race last week, and neither Rodriguez and Barboza has a sign in their own front yards.

Neither agreed to an interview this story, nor did they return calls. An interview request of Barboza, made outside his home to the candidate’s wife, Delilah, went unanswered.

This reporter also left a card outside Rodriguez’s house but the candidate never called.

Gonzales’ campaign says Madigan’s people put Rodriguez and Barboza in the race to dilute the Latino vote. A spokesman for Madigan says he’s never heard of Rodriguez or Barboza.

The 73-year-old Madigan hasn’t broken his long-standing preference to avoid media coverage. He’s largely remained in Springfield and he’s not participated in public forums or debates.

Yet, he’s still gone on the offensive, sending out mailers that attack Gonzales’ criminal record.

In the early 1990s, a 17-year-old Gonzales was convicted of six charges involving forgery, theft and misuse of credit cards.

He dropped out of high school, but at 21 he earned his diploma. In the years following, he earned degrees from Duke University, MIT and Harvard.

“These, what? Seven, eight or nine arrests ... It seems like it’s part of a person’s resume. You have to define the candidate. I think right along the lines of what the facts show of the situation,” Brown said. “Those events happened. It all seems like a complete part of the story.”

“All the money comes from either Rauner contributors or people who are close allies of the governor,” Brown said. “It’s very little non-Rauner involvement that I’ve been able to find.”

Campaign finance reports show Gonzales has raised about $250,000, with much of that coming from Republican donors.

Gonzales admits to accepting donations from Republicans but denies being a Rauner plant. He says he’s an independent Democrat who simply wants to end Madigan’s dominance and says the speaker has been in office way too long.

But it’s that experience that Gonzales is up against.