Brian Kratzer's students had a singularly complex assignment in recent days: They had to cover the protests at the University of Missouri's flagship campus in Columbia at a time when those protests had turned singularly hostile to coverage — and reporters. Astonishingly, some of those most hostile turned out to be on the university's faculty and staff.

"Here was an activist group that needed us to get their message out and they were trying to shut us down," said Kratzer, the director of photography at the city's morning daily, the Columbia Missourian. "Maybe they didn't understand how public spaces work."

Kratzer is also an assistant professor at Mizzou's prestigious journalism school, which runs the paper. He says he has witnessed what he's called an "a la carte" approach to the First Amendment, in which some rights were observed and others ignored.

At the beginning, as one of the leading black student groups started to plan the protests, journalists who arrived at open meetings on campus were told to put down their cameras and close their notebooks. Such journalistic tools would inhibit free conversation, they were told. One student leader who ultimately went on a hunger strike forged a cordial relationship with a photographer who captured many key moments. 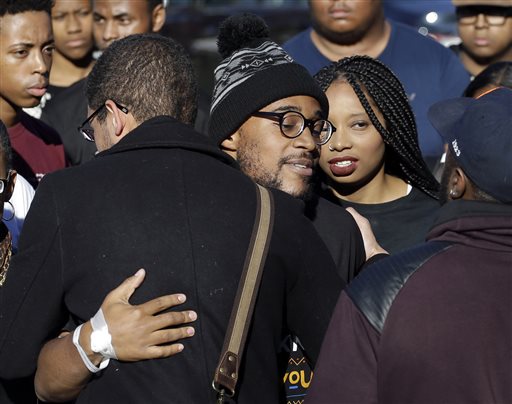 Faculty members who joined the movement were advised by email and Twitter not to talk to reporters but to refer inquiries to one or two protest leaders. By the time the protests emerged on the Carnahan Quad, demonstrators sought to squash the right of student reporters and journalists to document their cause. They did it with signs saying "No Media." They did so with words of warning, with implied menace; even, in some cases, shoving reporters away from a campus quad where they had every right to operate.

No matter what you think of their cause, the intimidation was a serious mistake. Then again, you expect college students to make mistakes during their years on campus. It's part of the point of coming to campus. You screw up, you learn, and you take those lessons with you.

You don't expect people holding positions of authority to make those same mistakes. Yet in several instances, faculty members and administrators were documented — some on video — harassing those merely seeking to report what was unquestionably news while standing in an unquestionably public space.

Yet an administrator repeatedly tried to block a student journalist, Tim Tai, from taking pictures on assignment for ESPN. "You need to back off," she told him, flanked by student protesters. "You are infringing on their right to be alone." She helped lead a group of students who essentially steamrolled Tai away, even as he calmly asserted his First Amendment rights to be there.

That administrator, Janna Basler, is the university's assistant director of Greek life and leadership in the student life division.

A faculty member, later caught on that same video, repeatedly sought to banish a videographer who lingered behind a wall of students and finally called out for backup. "Hey, who wants to help me get this reporter out of here? I need some muscle over here!"

That faculty member, Melissa Click, is a junior professor in mass media studies. She studies television and pop culture and presumably along the way acquired some understanding of the press. (Technically, her appointment is in the Department of Communications, which is part of the College of Arts and Sciences, not the journalism school.) Maybe she understood all too well that reporters can capture flaws as well as strengths, can force people off message, can err or distort in their coverage.

But that's part of the education, too, for the aspiring journalists and for the people they cover.

Kratzer said another professor had berated one of his photographers so severely on Saturday that the student texted to say he didn't think he could return for more.

"What happens when faculty members join the activist group and start doing things against the journalists? It has made me question a lot of things," Kratzer told me. "It all feels so raw."

For his part, Kratzer seized the moment to help theMissourian document the campus protests professionally and to exhibit civic responsibility as well. He has reminded editors and staffers to remain courteous toward the protesters. "Theirs is a cause they feel passionately about," Kratzer said. "Let's approach this not as full of angst and anger, but as calm journalists."

The dean of the journalism school, David Kurpius, put out a statement Tuesday praising Tai's restraint and reiterating the importance of the First Amendment. He said Click's courtesy cross appointment in the journalism school was being reviewed. There was no comment from the university system's board of curators about the denial of First Amendment rights for some of its students. Click's department chairman also reiterated First Amendment rights, and he could not speak about "personnel decisions."

I am just about unyielding in my belief in Click's freedom of inquiry and expression. Yet, I cannot for the life of me understand the university's passivity in the face of her actions or those by others paid by the University of Missouri to help educate the state's youth. Those actions contradict everything the journalism school professes to stand for.

It's taken too long for the university to respond. That may have something to do with the resignations of the university system president and the campus chancellor.

Late Tuesday, Click issued a statement through the university saying she had apologized to the student taping the scene whom she had ordered to leave. She added, in part:

"I regret the language and strategies I used, and sincerely apologize to the MU campus community, and journalists at large, for my behavior, and also for the way my actions have shifted attention away from the students' campaign for justice."

Those who physically interfered with young reporters will have to work hard to convince people they deserve the right to hold on to their jobs. But I'm open to the argument. After all, that's implied by free speech too.

Toward the end of the afternoon, an olive branch emerged — a new note circulated on campus by a leading protest group and posted widely on social media. It acknowledged the First Amendment rights of reporters to be present. It said the media had an important role to tell the story of the protesters. And then it encouraged protesters to thank journalists for doing their job.