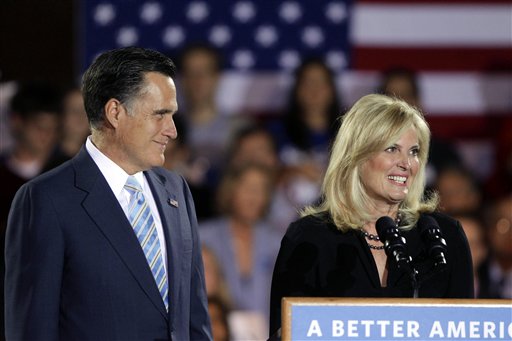 Ann Romney, the wife of presumed GOP presidential nominee Mitt Romney, has received new scrutiny as her husband's presidential campaign heats up. Last week, she and Democratic strategist and CNN political analyst Hilary Rosen got into words over whether or not she could speak for working women. This week, attention has shifted to her battle with multiple sclerosis.

All this new news really tells us only one thing: how little we know about Ann Romney. At The Paper Machete, comedian Kate Duffy attempted to dig into Romney's social sphere, and revealed her findings by playing Ann Romney's best friend, Tinker Saltonstall. What did we learn? Well,  Mrs. Romney enjoys a little-known-hobby called horse dancing. Read an excerpt below, or listen above.

Obama is here. I didn’t vote for him. Massachusetts is liberal, but not that liberal. I do enjoy his speeches. Very charismatic.

So many people have asked me, 'Tinker, how did you, a died-in the wool New England blue blood, become best friends with Ann Romney, a Mormon? In Massachusetts? Well, did you see the hit movie Dances with Wolves? The Romney reverse pioneered their way in to my world. And we -- the Indians in this scenario -- (although less red, and with more money, were very suspicious. One day, Mitt saw my son, Charles, fall off his bike, spraining his ankle potentially ruining his chances to play division one Lacrosse. Mitt carried him to our house, never once tried that Mormon black magic on him. We thought, 'Let’s give these people a chance', and been friends ever since. But unlike the Indians, we’re still on high alert. A few Mormons is kitschy. Too many and your liquor stores start closing."