The monument at 2701 South Damen Avenue honors Father Jacques Marquette, the first European to reside in Chicago. I’ve talked about Marquette in an earlier post. Now let’s look at what the plaque on the monument tells us about a different time — the time in which the monument itself was built. 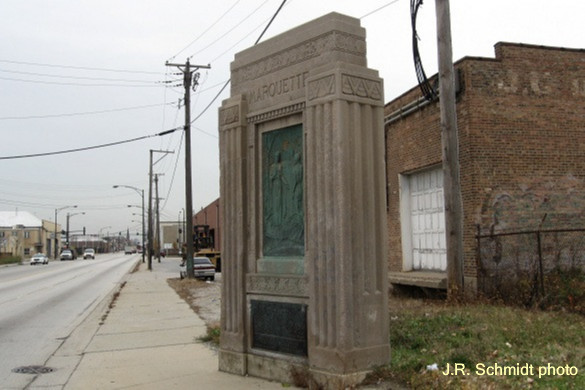 That would be the year 1930. On the plaque, this date is rendered at the bottom left as “Anno Domini MCMXXX.” Of course, using Roman numerals on our public structures was once common. Perhaps the builders thought the numerals had some magic power, guaranteeing that their own efforts would last as long as the Colosseum or the Arch of Constantine.

Just above the date are the names of two people. Here we have a politician — the mayor — and one of his appointees, the head of the commission that actually built the monument. Nothing unusual about that.

But look at the first line, the name of the man being honored. “James Marquette.” For some reason, they’ve Anglicized the good father's personal name. If you’re going to translate "Jacques" into our local language, why bother with the Roman numerals further down the plaque? 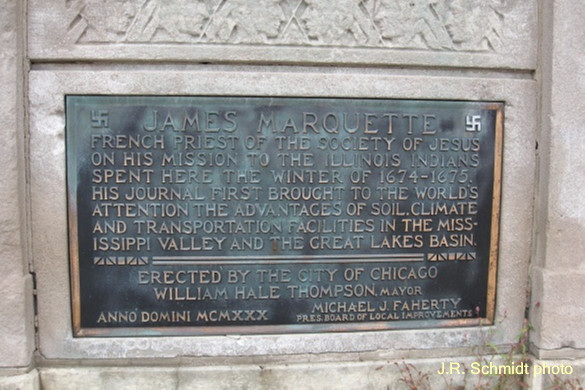 The text of the plaque tells us of Marquette’s historic importance, of how his journals touted our region. I can appreciate the advantages of our soil and transportation facilities. Yet I don’t think our climate is a major selling point.
Oh, and there’s one more thing that always seems to catch the viewer’s eye. The swastikas.
No, Marquette wasn’t a Nazi, nor was Mayor Thompson, nor Mr. Faherty. The swastika was an ancient Aryan symbol of good luck that Hitler appropriated. Until the Nazis made them notorious, you’d see swastikas in many innocent places. 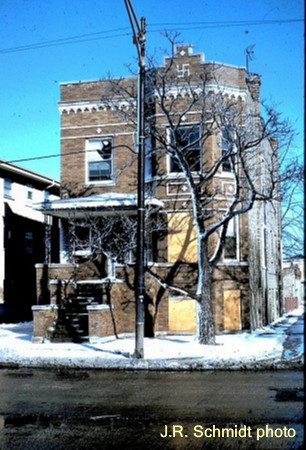 When I was growing up on the Northwest Side, a certain two-flat on Central Avenue had a swastika prominently displayed in the brickwork. The building dated from 1920, when Hitler was still an unknown thug. But by 1974, the bad vibes evidently became too much, and the owner tore it down.

Back on Damen Avenue, I suppose the city could do something about those to little swastikas on the Marquette plaque. What do you think?