Earlier this week the Art Institute of Chicago lifted the silver dome on its latest treat, an exhibit called “Art and Appetite.”

Featuring 100 paintings, sculptures and pieces of decorative arts, it offers a delicious romp through the victuals of 18th, 19th and 20th Century America.  On a timely note, “Art and Appetite” kicks off with a “Thanksgiving” gallery featuring a pop art turkey by Roy Lichtenstein and Norman Rockwell’s 1943  “Freedom From Want,” a painting that, for better or for worse, has come to define what the modern American Thanksgiving is supposed to look like.

And while sometimes a painted apple is just an apple, curator Judith Barter says food depictions are often served with a side of biting commentary on politics, social mores, national eating patterns and cultural decline. 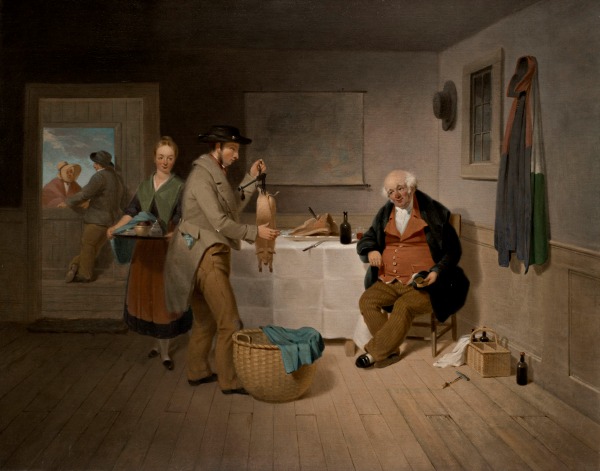 “It’s loosely based on a previous Dutch picture from the 17th Century,” Barter says. “But it’s also a political cartoon. When Andrew Jackson is president there is a large debate over sectionalism in the country: Northern banking interests versus the Jeffersonian ideal of Southern small farmers. And so the wealthy gourmand here with his snuff box and big side of beef and Madeira represents the North. He has stopped at a country inn and he is being presented with a suckling pig, which represents the prevalent meat of the South, by a simple farmer and his wife. So there are political overtones to this as well.”

This one, Barter notes, illuminates the era’s seasonal produce as well as the kinds of glass and porcelain goods that were being exported from China at the time. 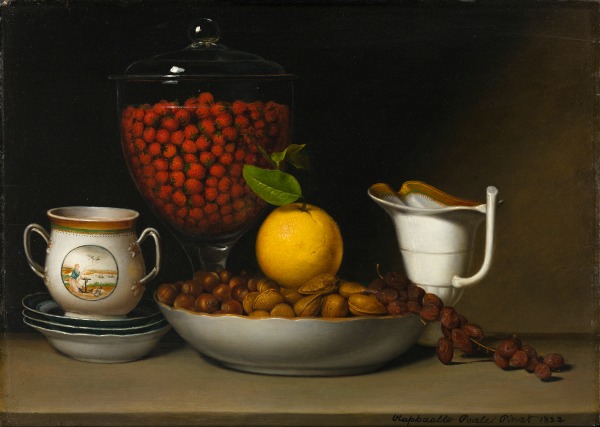 But the painting also features a warty, cucumber-like fruit filled with red poisonous seeds and a pointed message.

“It’s called a balsam pear,” she said. “At this period of time in the 1820s there is already lots of discussion about Americans’ use of their land and preserving it. Former President James Madison, in 1819, is addressing Congress and other groups about how Americans need to plow under their spent crops and rotate their crops and better take care of their land. So, to me, this [poisonous fruit among late summer crops] is a little trouble introduced into the Garden of Eden.”

While some folks may love “Art and Appetite” for its window into the bellies of 18th and 19th Americans (at least among a certain class of bellies), others may appreciate the more conceptual 20th Century pop art of Andy Warhol and sculptor Claes Oldenburg, whose works include a giant fried egg and pile of green beans.

And for those who want to take some of this back to their homes and kitchens, there is a lovely companion book ($30-$50) with fascinating analysis and historical recipes for things like “sheepes tongue pie,” potted pigeons and molasses cake. Some of these recipes and more contemporary American dishes from top Chicago chefs are also featured on the exhibit’s website, which launched this week. Bon appetit!