Between his wife, children and grandchildren, there are a lot of mouths to feed in Kenny Flowers’ home. But he says it has been a decade since his last full-time job. And he lost one of his two part-time jobs a few months ago.

“So I’ve been coming to MVP to pick up [work] and just get some honest money,” says Flowers, 38, referring to Most Valuable Personnel, part of Personnel Staffing Group, a chain based in the Chicago area with operations in eight states.

Flowers, a lifelong resident of the city’s West Side, says he has gone at least four times this year to MVP’s office in the Town of Cicero, a suburb bordering the city. He says he has spent hours and hours in the waiting room.

But MVP has yet to give Flowers any work. Asked why, a company spokesman responds that Flowers “calls the office frequently and is advised to come in the following day to be assigned out for work” but “does not arrive to be sent out.”

Flowers calls that baloney and wonders whether MVP is trying to hide something he has noticed in the waiting room. “I see more Latinos going out than I do African Americans,” he says.

Flowers suspects that many of those Latinos are in the country illegally. He says MVP assigns them work on the belief that unauthorized immigrants are less likely to raise a stink when employers short them out of pay or put them in dangerous conditions. The staffing firm denies that allegation.

MVP’s Cicero location is among 933 offices of temp agencies registered to operate in Illinois. Nationwide, more than 2.9 million people were employed as temps in September, according to U.S. Bureau of Labor Statistics data. Temp jobs, once mostly clerical, are now mainly blue-collar and constitute about 2 percent of the nation’s employment.

Those are all record numbers, but African Americans say they are not getting a fair shot at the work. They are accusing the staffing companies of discrimination. And their claims are getting attention from temp-worker advocates, federal regulators and some Illinois lawmakers.

Flowers takes me to that MVP office, part of a strip mall along the border between Cicero and Chicago. In the waiting room I see more than four dozen blue-collar workers hoping for an assignment. Some say they have been there for hours. While they wait, they are not getting paid. Nearly all are black.

I pull out my audio-recording gear and take a few photos of Flowers on the sidewalk, where workers have spilled out from the waiting room. Within minutes a woman who helps run this MVP office comes out and commands everyone to go back inside. Everyone, that is, but Flowers and me. She tells us to leave, and we do.

But we do not get far. As I interview Flowers on a residential sidewalk around the corner, a Cicero police car pulls up, then another. “We have the subjects,” one of officers tells his radio dispatcher. 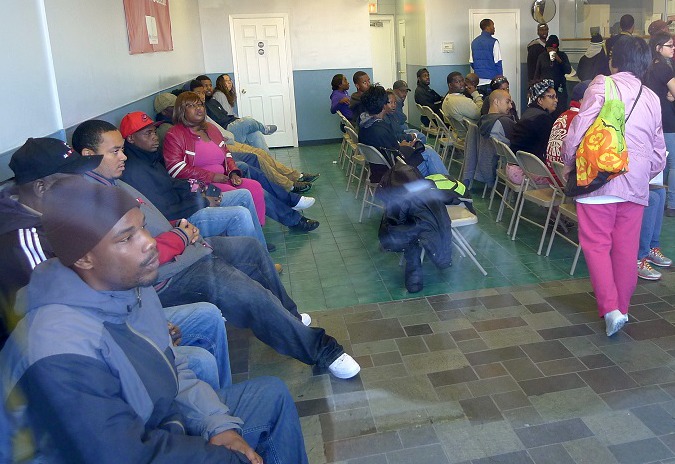 “I’m going to need to see IDs from both you gentlemen,” the officer tells Flowers and me. The cop says it was MVP that called the police on us.

After they run our driver’s licenses for warrants, the officers leave us alone. But the whole experience signals that discrimination allegations in the staffing industry have touched a nerve.

MVP is a defendant in two class-action lawsuits in federal court. Both claim employment discrimination against African Americans. Temp-worker advocates, meanwhile, have come to the company’s Cicero office to hand out flyers about wage theft. MVP claims the leafleting is an effort to “coerce” the company to settle the litigation.

But Christopher Williams, the attorney who filed the suits, says MVP has only itself to blame. “Where there’s a staffing agency within two miles of zip codes that have a population that’s 97-98 percent African American, why were no African Americans — almost none — sent to work jobs at Gold Standard Baking?”

Gold Standard, an industrial bakery on Chicago’s Southwest Side, relies on MVP for labor. The two companies are co-defendants in one of the suits. The claim is that the bakery asked for immigrant temps instead of African American temps and that the staffing agency fulfilled that request.

“Over a four-year period, when approximately 5,000 workers were sent to Gold Standard Baking, only 85 of those were African American,” Williams says. “These are low-skilled jobs that people on the West Side of Chicago need to have access to.”

At the same time, Williams says, MVP focused its recruiting on Spanish-speaking workers, and the company sent out vans to pick them up in heavily immigrant neighborhoods such as Little Village.

In court, MVP has countered that the reason its workforce is mostly Latino is because of the office’s location. Nearby Chicago neighborhoods may be black, but Cicero is mostly Latino.

“MVP does not discriminate against African Americans,” Elliot Richardson, an attorney for the company, tells me. “MVP sends out the very best employees for the positions that fit what those employees can do. There are plenty of job offerings at MVP right now. They are looking for workers. Regardless of their race, we welcome people to come in and to apply.”

Gold Standard officials, for their part, referred WBEZ questions about the suit to a lawyer. He sent a statement that denies the allegations and calls the company “an equal opportunity employer” that is “proud of its diverse workforce.”

Last week MVP brought a suit of its own. The claim, filed in Cook County Circuit Court, accuses the temp-worker advocates and their group, the nonprofit Chicago Workers’ Collaborative, of defamation.

“Their goal is to destroy the temporary employment agencies in the city,” Richardson says. “MVP does not steal its employees’ wages.”

The temp-worker advocates respond that they are not trying to destroy the agencies, just some of their practices, such as the alleged race-based hiring.

Leone José Bicchieri, the collaborative’s executive director, calls it “sad that one of the major staffing agencies in the state of Illinois has decided to use so much time, energy, resources and money on lawyers” instead of addressing worker grievances. Bicchieri says the defamation suit is an effort to silence workers.

If some temp agencies are discriminating, it is difficult to find out how many. The U.S. Equal Employment Opportunity Commission does not tally complaints against staffing firms.

But a few of those EEOC complaints in recent years have led to six-figure settlements from those companies. “There have always been staffing agencies willing to steer employees based on race and other illegal factors, and that’s certainly ongoing,” said Jean Kamp, a top attorney of the EEOC’s Chicago office. “As more people are working through staffing agencies, it’s more of a problem.”

Besides filing EEOC complaints, temp workers alleging race-based hiring discrimination are also dragging staffing firms into federal court. In the Chicago area, Williams is representing plaintiffs in three class-action suits. The defendants include MVP, four other temp agencies and three companies that contracted with the agencies for labor.

But alleging discrimination is easier than proving it. In court, MVP has claimed that it does not keep records on people who arrive in search of a job. That claim, contradicted by a company vice president at a July forum recorded by WBEZ, has made it difficult for the plaintiffs to gather information about the job seekers’ race.

“This issue is about to be resolved,” state Rep. Ken Dunkin (D-Chicago) said last week as he came out with draft legislation that would tighten up record-keeping requirements. His proposal would require staffing firms to keep a contact form on each job seeker and enable those workers to indicate their race and gender on that form. The idea is to make hiring discrimination easier to find.

“Hopefully we’ll get to the bottom line in resolving this open and blatant discrimination against African Americans, [whose] unemployment rate is just as high as our Latino brothers and sisters,” Dunkin said.

The two main trade groups representing temp firms in the state — the Staffing Services Association of Illinois and the Illinois Search and Staffing Association — both declined to comment about the discrimination allegations and Dunkin’s proposal.

Dunkin says he will introduce that bill this fall or winter after gathering co-sponsors.

In the meantime, Flowers is still hoping to find more income. “Holidays are coming up and it’s real rough on me,” he said. “It’s going to be winter and the heat and gas bills are going to go up even more. I would like my kids to have a nice Christmas like everybody else.”

He might be eligible to file a claim under one of the class-action suits against MVP, but the company is not showing much interest in settling.

So, Flowers says, he will keep showing up at the temp agency. Some day, he says, it might send him out to work.