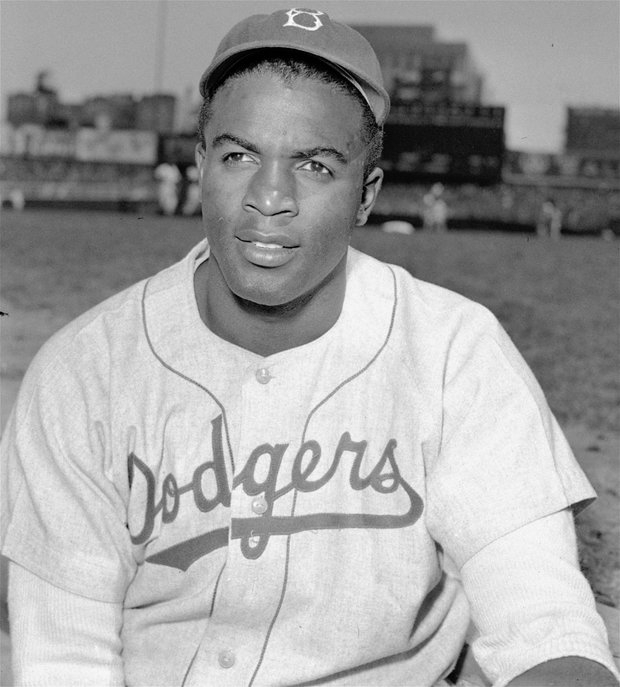 Baseball is a game of numbers, but today there is only one that is important: 42. Major League Baseball in 2004 designated April 15 as the annual celebration of Jackie Robinson’s first appearance as a Brooklyn Dodger.

Sixteen years ago, Robinson’s number was officially retired by the MLB. It's one of the most distinctive tributes to what he did for baseball and society. Part of the celebration includes all players, coaches and managers wearing the number 42 on their jerseys as all of baseball honors the man who bravely became the first African-American player in MLB.

Since the Cubs are off today, they will honor Robinson tomorrow night when they host the Texas Rangers. Two Hall of Fame Cubs will be part of pre-game ceremonies: Ernie Banks and Billy Williams. Banks was the first African-American to play for the Northsiders and considered Robinson as a mentor. Williams joined the major leagues shortly after Robinson and Banks.

Hollywood is also spotlighting Robinson with the recently released movie 42: The True Story of an American Legend.

It's not the first cinematic version of the icon's story. In 1950, Robinson starred in the biographical film, The Jackie Robinson Story. There have also been three television versions of his story and a Broadway production about his life and legacy. The timing of the recent biography will help younger generations be aware and informed about the difficulties that Robinson, and to some extent Dodger executive Branch Rickey, went through to break the color barrier in baseball. It was a defining moment not just for sports, but a reflection on the racial divide in America.

This is Sappelt’s first time celebrating Robinson in the major leagues. He recalled his grandparents telling him stories about the famed player. However, the Cubs outfielder remarked the sport's racial struggles lasted decades beyond that 1947 season. Sappelt believes wearing the 42 jersey will show appreciation to Robinson and the others who followed and played the game the right way under tremendous pressure.

Tomorrow will also be a first for Rowsan. In his first full season as a major league coach, Rowsan says wearing 42 is “a great level of honor.” Even though the league celebrates Jackie Robinson once a year, Rowsan says he and other African Americans celebrate everyday they step on a baseball field. Growing up in New York, he said he learned the lessons of that era from his father.

Hairston comes from a long line of baseball players. He and his brother Jerry Jr. followed in their father Jerry and Uncle John’s footsteps and they were preceded by Sam Hairston, who played in the Negro Leagues with Robinson. Hairston said Robinson may not have been the best player from the Negro League, but he was the best to withstand the challenges of breaking the color barrier. Hairston said it is “mind blowing” to think about Robinson being the only black player that first year.

As a young man, Hairston heard stories from his grandfather about the problems players in the Negro League dealt with on the road. Hotels often turned them away, forcing players to sleep on buses. But Hairston said his grandfather never lost the love for the game. And he says players should never lose that appreciation of what those players went through. With two young sons age 5 and 7, Hairston had murals of Sam Hairston in action painted on their bedroom walls. Tuesday night, Hairston says he will think of his grandfather as he and the rest of baseball honor Jackie Robinson.